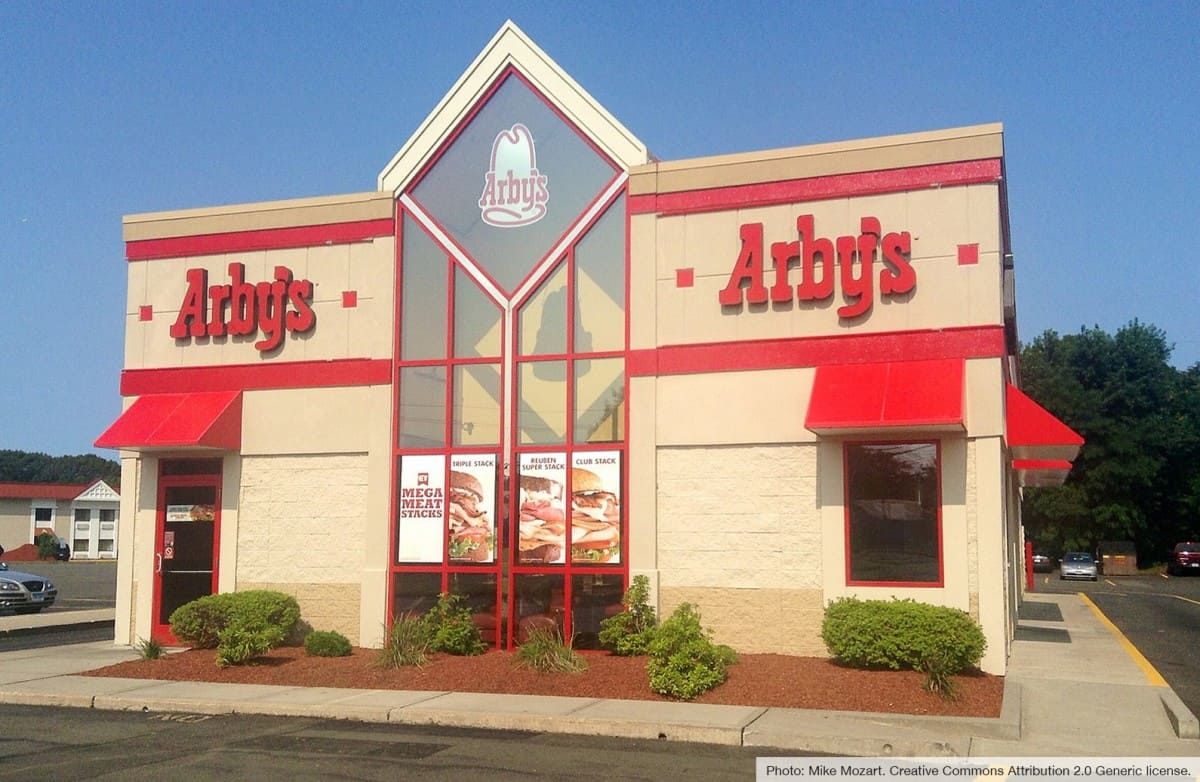 Arby’s hasn’t been very friendly to vegans when it comes to PR tactics. They’ve openly mocked vegetarians before—and their slogan is “We Have the Meats.” But they actually have some decent vegan options, too.

Below, I’ll cover how to order these items vegan, and which items are surprisingly NOT vegan. I’ll also discuss Arby’s controversial anti-vegan stunts and comments. And I’ll share a whole-food plant-based (WFPB) menu, too—for vegans who also avoid processed food.

This vegan menu was compiled with the allergen info and ingredients lists on Arby’s website.

Restaurant menus frequently change and may vary by location. So you may want to double check the information below with staff at your Arby’s location.

These are some of the most legendary fries in American fast food. A delicious memory from many of our childhoods…

If you’ve ever wondered where the flavor comes from in Curly Fries, it’s mainly onion powder, garlic powder, and a mix of other spices.

Here are the full ingredients:

Note: The Loaded Curly Fries are not vegan.

If you prefer a more classic, straight french fry… well, you can get these at many Arby’s locations, too.

These have a shorter, simpler ingredients list compared to the Curly Fries, and they’re fully vegan.

Note: These are fried in shared fryers with non-vegan foods.

These are currently a “Special” item at Arby’s—so they may not last. But for now, they’re here and they’re vegan!

You get a lot of novelty here. They’re not just sweet potato fries, but you also get the signature waffle shape. Love it.

Note: These are fryed in vegetable oil in shared fryers with animal products.

It’s amazing how many delicious things you can do with potatoes, oil, and salt.

Note: As with the fries above, Potato Cakes are fryed in shared fryers with non-vegan products.

5. Side Salad (Without Cheese)

This is just a simple side salad. But it’s nice to at least have a source of fresh veggies to pair with these fried foods.

If you ask to order it without cheese, you’ll just get iceberg lettuce, leaf lettuce, and tomatoes. So it’s pretty minimal.

Now this is an interesting one! Most restaurants have nothing for vegan desserts. Arby’s actually has two “accidentally vegan” fruit turnovers:

The crust is not made with lard, but with margarine and vegetable shortening (like Crisco, which is vegan). There is no dairy or egg involved, either.

Here’s the full ingredients for the Apple Turnover (and the Cherry Turnover is very similar):

Arby’s has Tree Top Applesauce on the kids menu. And yes… you can get it as an adult.

The ingredients are just apples, water, and added vitamin C (ascorbic acid). So there are no worries from a vegan perspective. It’s nice they don’t have added sugar, either. (Added sugar or corn syrup is common in applesauce.)

Some locations may have apple slices instead—but those are vegan, too (obviously).

Arby’s is known for its sauces, and many of them are vegan:

These sauces are NOT vegan:

There are plenty of vegan beverages to choose from:

What if you’re not just vegan but also trying to avoid processed foods? Are there any whole-food plant-based (WFPB) options at Arby’s?

That’s really it. Most of the vegan options at Arby’s are fried potatoes, and oils aren’t allowed on a strict WFPB program.

And you may need to have the salad without dressing, too. The only vegan salad dressings (Light Italian and Balsamic Vinaigrette) both contain quite a bit of soybean oil, which is one of the less healthy oils.

So this is not a great restaurant for eating a healthy vegan diet and excluding processed foods. Other restaurants like Wendy’s will at least have a baked potato or something.

If you’re going to Arby’s and trying to make it a healthy meal, you may want to bring your own nutritional yeast to season the salad… And maybe just eat in advance, so you’re not that hungry.

Arby’s as a corporation isn’t just oblivious to veganism and vegetarianism. They have actually openly mocked and pushed away vegans.

Back in 2015, Arby’s released a satirical letter written to mock vegetarians and stir up controversy and press.

The letter basically said, If you’re vegetarian and struggling to resist temptation to eat our delicious meats, call our Vegetarian Crisis Hotline at 1-855-MEAT-HLP. You can read it all here.

More recently, Arby’s President Rob Lynch has clearly stated that Arby’s will “never” offer plant-based meats like the Impossible Burger. He said “Not on my watch,” saying it would only ever happen if he’s fired. (source)

And that’s not all. Arby’s also famously made a carrot out of meat—the opposite of a burger made of veggies. It’s called the “Marrot,” and it was a bit of a viral hit.

After looking at these examples, the slogan “We Have the Meats” takes on a bit of a different feeling. I’m not saying I’d strictly boycott Arby’s over this stuff—but I wouldn’t be surprised if many vegans did!

Just to make sure I’m answering everyone’s questions clearly, here are the full answers to two more questions about vegan options at Arby’s.

Arby’s Sauce is confirmed vegan. It contains no milk, egg, honey, or other animal products. Here’s the full list of Arby’s Sauce ingredients:

Arby’s Fries are generally considered vegan. All their fries are cooked in vegetable oil, not lard or animal fat. In addition, neither the Crispy Fries nor the Homestyle Fries contain non-vegan seasonings.

Here are the ingredients for Arby’s Frying Oil: