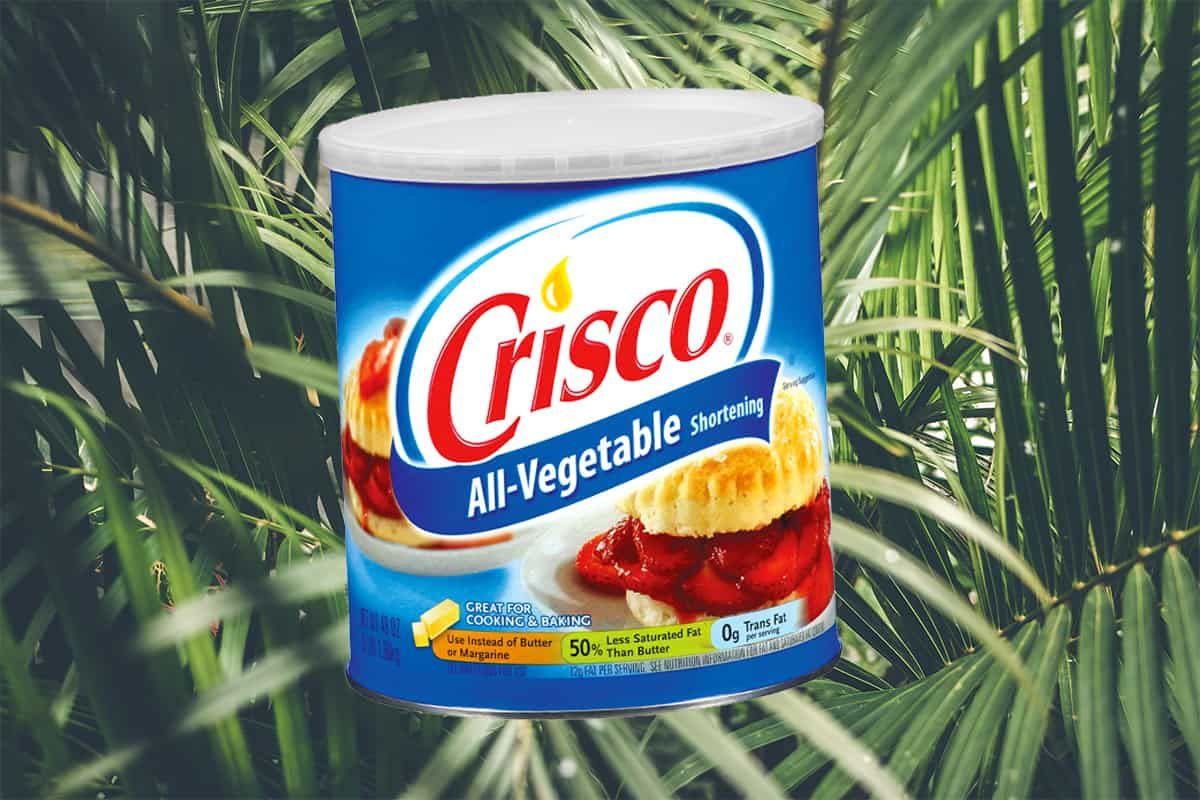 Sometimes with processed foods, it’s hard to tell what they’re even made of. I would say this is definitely the case with vegetable shortening, a.k.a. Crisco. The fact that it’s called “vegetable” shortening made me assume it’s probably vegan-friendly, but I didn’t know for sure until recently.

So, is Crisco vegan? Crisco is generally considered vegan. It is made from hydrogenated palm oil and other vegetable oils and it does not contain lard, animal fat, or dairy products. Although Crisco is free of animal ingredients, it is highly processed and some vegans avoid it for health reasons.

Below I’ll lay out exactly what Crisco is made of, why some vegans avoid it for health reasons, and whether the palm oil in Crisco is produced in an eco-friendly manner.

What Is Crisco Made Of?

Here are the ingredients for Crisco’s All-Vegetable Shortening, taken from the company’s website in January 2020:

Although Crisco was formerly made with partially hydrogenated oils, the recipe has been changed to remove all trans fat from the product.

Now the shortening is made with a mix of vegetable oils including fully hydrogenated palm oil, which does not contain trans fat.

Crisco does not contain lard or other animal fats.

Although the term “shortening” historically included lard and other animal fats, today it refers almost exclusively to vegetable shortening, of which Crisco is the leading brand.

Crisco does not contain butter, cream, or any dairy. The fat in Crisco comes from vegetable oils.

Are the Mono- and Diglycerides in Crisco Vegan?

One of the ingredients in Crisco that may give some vegans pause is mono- and diglycerides. This is an ingredient that can be sourced from plant or animal sources, so it’s hard to know for sure which one.

Considering that most mono- and diglycerides are vegan and that the rest of the ingredients are vegan, the majority of vegans will be comfortable with assuming that Crisco is free of animal-derived ingredients.

Why Crisco Is Vegan

In order to be vegan, a product should not contain animal products or involve animals in its production process.

As outlined above, from what we can tell, Crisco production does not involve animals or animal by-products at any point. Therefore, it is vegan.

How Unhealthy Is Crisco?

The biggest concern most vegans will have with Crisco is just from a health perspective. Vegetable shortening is very processed. It’s not a “whole food”—that’s for sure!

But the biggest health concern with Crisco has specifically been trans fat. Does Crisco today even contain trans fat?

Crisco is known for containing hydrogenated vegetable oils and, in the past, trans fat.

While there are debates over the health risks associated with saturated fat, it’s pretty unanimous that trans fats should be avoided if possible. Any consumption of trans fat has been shown to increase heart disease risk.

Some trans fats occur naturally in meat and dairy products, and this is one reason to avoid these animal products. Until recently, trans fats were common in processed foods, as well.

Products like Crisco, along with peanut butter and other processed foods, would often include “partially hydrogenated vegetable oils.” But this process of “partial hydrogenation” would also create trans fat.

Today you’ll no longer see “partially hydrogenated oil” in the Crisco ingredients. You only see “fully hydrogenated palm oil” mixed with other vegetable oils to make the right consistency. Therefore, Crisco no longer contains trans fat, as far as I am aware.

Other Health Concerns with Crisco

Although the concerns about trans fat in Crisco are outdated, it’s still not a health food. Consider that Crisco is:

• High in calories. Crisco is 100% fat, and this makes it very calorically dense. It can add quite a few calories to your diet without filling you up. This is likely to lead you to eat more calories than you need and potentially gain weight if you eat it regularly.

• Low in nutrients. Crisco is low in vitamins and other micronutrients, making all the calories quite “empty” nutritionally speaking.

A healthy vegan diet should minimize processed foods, and that would include Crisco. A little bit shouldn’t hurt you too much, but

Is Coconut Oil a Healthy Alternative to Crisco?

One of the common recommendations you’ll see as a replacement to Crisco is coconut oil. Since coconut oil is a saturated fat, it is solid at room temperature, like Crisco, so it can be used for similar purposes.

Coconut oil is still a processed food—it’s not a whole coconut, after all—but arguably it’s less processed than Crisco. It’s not hydrogenated.

Many people tout the benefits of the special kind of fat found in coconut oil, medium-chain triglycerides (MCTs). Coconut oil is said to have benefits for weight loss, skin, hair, and other aspects of health.

From a baking perspective, coconut oil may not have quite the same features as Crisco. Coconut oil can be fickle for inexperienced bakers to work with. And it can add a coconut flavor, which you may not always want. Still, it’s an option that appeals to many.

You can also check out options like Earth Balance’s vegan butter spreads and sticks (Amazon links). But I doubt that’s significantly healthier.

I’d just suggest limiting how often you’re eating Crisco, (vegan) butter, and most oils in general. A little bit of any of them should be fine—maybe coconut oil is the healthiest—but I don’t see any option that comes without a downside.

Is the Palm Oil in Crisco Sustainable?

Unfortunately, tigers, orangutans, and many other animals have been losing their habitats due to unsustainable palm oil production. For more info on this environmental destruction, check out this resource.

But fortunately, Crisco has taken steps toward ensuring that their palm oil comes from sustainable sources as of December 2015.

This palm oil shopping guide (published by the Columbus Zoo) lists a bunch of brands to support because they are members of the Roundtable on Sustainable Palm Oil (RSPO). And Crisco is on the list.

Therefore, as an ethical vegan, I would not choose to boycott Crisco for using palm oil. If this is an issue that especially concerns you, you can do more research into it, but it seems that Crisco is following the best practices as specified by the RSPO.

This is what I take away from the research I’ve done: I feel fine about buying Crisco on an ethical level, but I’d be careful about consuming too much of it.

Although it no longer contains trans fat, it’s still a highly processed food that’s full of empty calories. So personally, I’ll only use it in moderation.