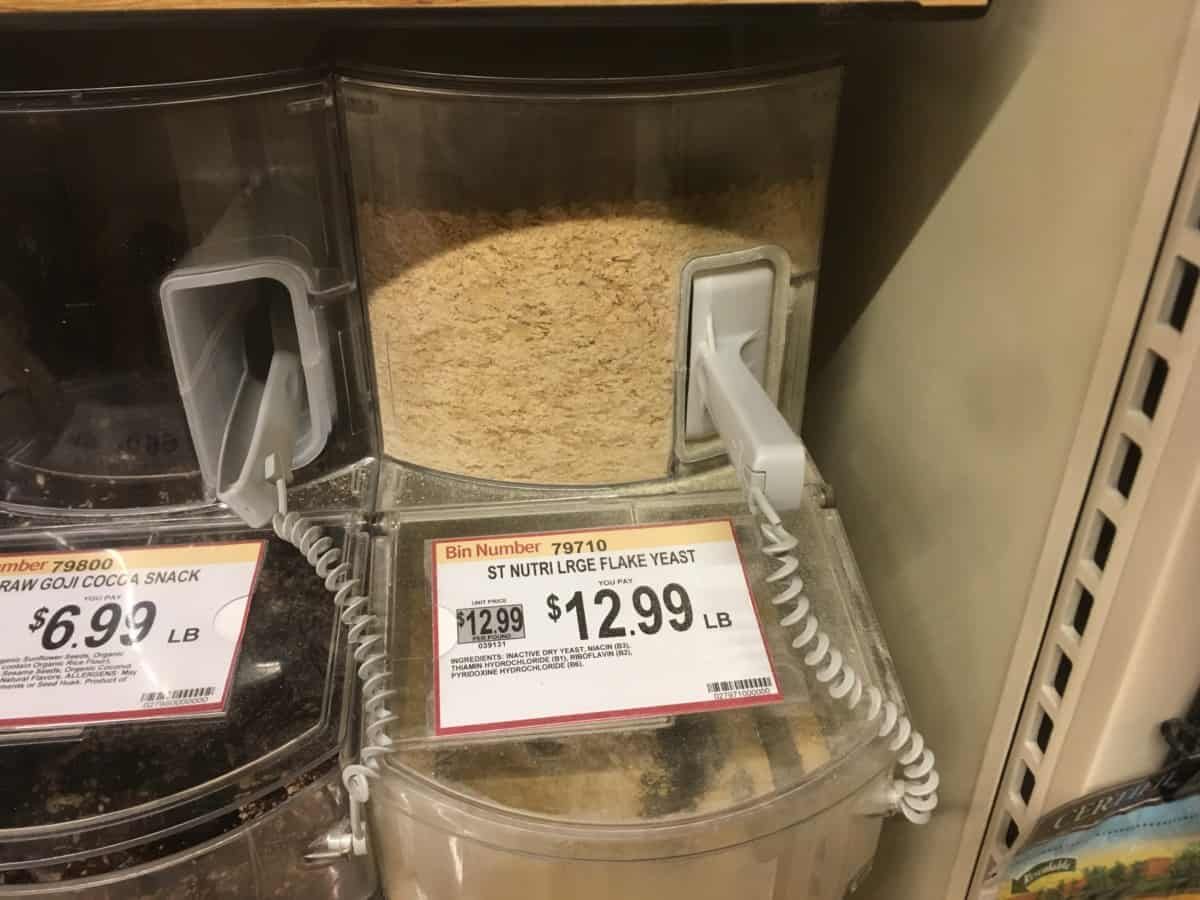 Nutritional yeast is delicious. It’s great on popcorn, salads, pasta, rice and beans, and more. But if you’re new to buying it, you may not know where to look in the store. As a 12-year vegan, I have experience finding nutritional yeast in many, many different stores.

So, where is nutritional yeast in the grocery store? Nutritional yeast is usually found in the natural foods or health food section of grocery stores. If the store has bulk bins, look for the pale yellow flakes there. It can also be found on the shelf in shakers, tins, or prepackaged bags next to other healthy toppings.

Which Grocery Stores Have Nutritional Yeast?

As plant-based eating becomes more popular, nutritional yeast can be found in more and more grocery stores. Still, in my experience, it is not available in every common grocery store.

If you know of a food co-op or natural foods store in your city, that is one of the best places to check for nutritional yeast. You should also have good luck finding it at Whole Foods Market and other large grocery stores that have natural foods.

For me personally, I buy my nutritional yeast from a large Wegman’s grocery store in my city. But sometimes, I will also just run to the natural foods co-op—they also have it.

I would not necessarily expect to find nutritional yeast at Wal-Mart, Target, or normal grocery stores like Safeway, Albertson’s, Fred Meyer, Meijer, Harris Teeter, Food Lion, Aldi, or Hannaford.If that’s all you have in town, it still may be worth checking—or you can buy it online (see below).

What Aisle Is Nutritional Yeast In?

Nutritional yeast is often in the health foods or natural foods section of grocery stores. You can usually buy it from the bulk bins or in a prepackaged container. I’ll show you examples of both.

Bulk food bins are your best bet for finding nutritional yeast at the best price. Some grocery stores only have one section with bulk food bins, so I would go directly to those bins first.

Some grocery stores actually have multiple areas with bulk food bins. If that’s the case, try the one that is closer to the natural food or health food section first.

How to Use Bulk Bins (If You Never Have)

Here’s what bulk bins look like if you’ve never really used them before. The idea is that you can load up as much or as little of the food as you want:

Usually, there’s a plastic bag dispenser nearby. You just open the bin you want, then use the attached scoop. Usually there are twist ties around to close your bag, too.

You usually need to write the bin number onto the bag or the twist tie. Or some grocery stores have computer scales nearby where you can just type in the bin number and it will print off a label to stick on the bag.

You are looking for yellow flakes. I haven’t noticed any patterns about which bins it will be next to. Just look for the yellow ones, and then check if it says something like “Nutritional Yeast Flakes.”

Often, it will say “Nutritional Yeast Flakes – Large” or an abbreviated version of that. That’s fine—the large flakes have a nice texture.

You see here the price is $12.99 per pound. Not cheap! But luckily, most recipes will only have you use a few tablespoons of nutritional yeast, so it will last a while.

This particular bin was almost empty when I found it! Here’s what it looks like on the scoop:

So that’s how you find nutritional yeast in the bulk bins, which is the most common place you’ll probably find it.

Where to Find Prepackaged Nutritional Yeast in the Store

If you don’t feel like messing with the bulk bins, you can also often find nutritional yeast in a shaker, big tin, or bag, too. For this, you’ll just have to look through the natural foods section of the store.

Here is the aisle I found in Wegman’s with the prepackaged nutritional yeast:

This was just in a random aisle in the natural foods section, kind of near the gluten-free foods. You’ll see there are other health-food products here, such as dressings, toppings, taco filling mix, and vegan mac and cheese.

Nutritional yeast is most commonly used as a topping—so it may be near the other healthy toppings. But since it’s most well-known among health food fanatics and vegans, I would look in the health/natural food section before looking by normal toppings.

Here’s the shaker of nutritional yeast that is most common in most U.S. stores, in my experience. I’ve found this same Bragg shaker at a bunch of different stores over the years:

If you look closely, you’ll see that the “per pound” price is actually a lot worse for this shaker compared to the bulk bin. It’s $21.30/lb for the shaker, while it was $12.99/lb from the bulk bin.

Actually, since I recognized the Bragg shaker right away, I didn’t even realize there were more nutritional yeast options to the left!

So that’s how you find prepackaged nutritonal yeast in the store. (Or you can just ask an employee to help you find it!)

The first big advantage of buying nutritional yeast online is that you can compare prices and try to get a better deal. Since you can buy big containers online, you may be able to find a real bargain.

Why would the brand of nutritional yeast even matter? Well, honestly, it’s probably not actually a big deal, but…

Dr. Michael Greger from Nutrition Facts conducted research into lead levels found in nutritional yeast a couple of years ago. You can read the full results in, “Three Brands of Nutritional Yeast Contain Detectable Lead Levels But the Risk is Minimal.”

Here’s the summary: they tested 8 different brands of nutritional yeast, and 3 of the brands had detectable levels of lead.

The three brands found to have detectable lead levels were Frontier, KAL, and Whole Foods. The brands with no detectable lead were Bob’s Red Mill, Bragg, Red Star, Dr. Fuhrman, or NOW Foods.

However, normal serving sizes of all of these brands still keep you well within the safety limits. You would have to be eating a ton of nutritional yeast before this could become even a possible issue.

Still, Dr. Greger recommends that pregnant women eating more than 1/3 of a cup of nutritional yeast per day choose the brands shown to contain no detectable lead. Otherwise, don’t worry about it. Again, here’s the full article.

If you specifically want to buy these brands with no detectable lead, here are Amazon links for a few of them:

2. This is the best vegan starter kit I know of. It’s a bundle of 9 beautiful e-books that help you transition to a healthy plant-based diet the right way. The advice is spot-on, and it has print-outs and checklists that make it easy to implement. Read my full review of Nutriciously here.

If you found this guide helpful and don’t want to lose track of it, save the Pin below to your Pinterest “Nutritional Yeast” or “Plant-Based Diet” board!