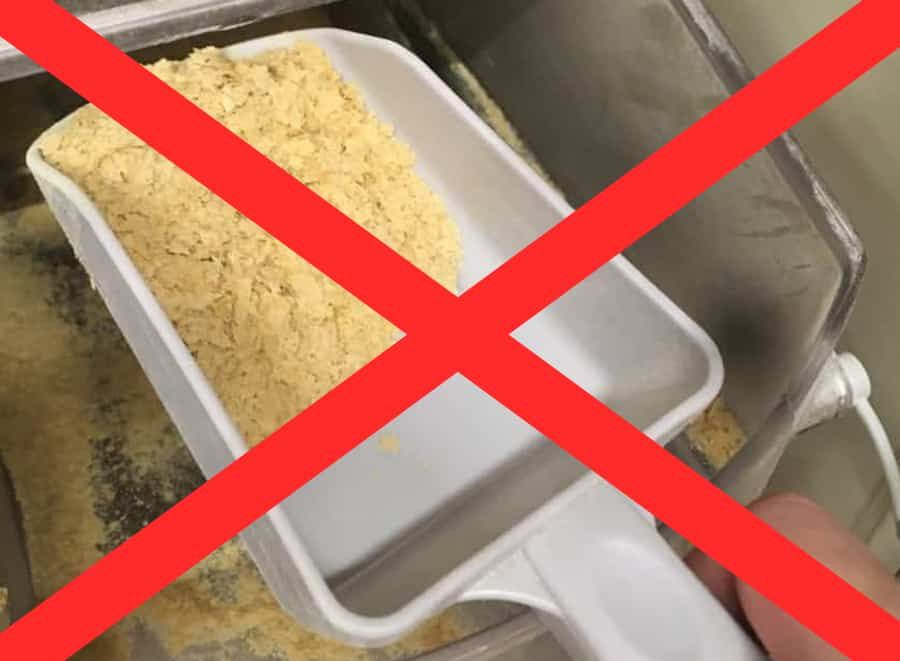 As a vegan of 14 years, I personally love nutritional yeast. But I also know that not everyone does! If you have yeast sensitivities, you hate the taste, or you just don’t have it on hand, you may need a replacement. Luckily for you, there are many good alternatives!

Below, I’ll explain which substitutes are best for which recipes, and how to choose. I’ll also mention some nutrition facts and cautionary tales that should help you decide. But first—let’s cover what nutritional yeast really is.

What is Nutritional Yeast?

Yeast is a fungus. And nutritional yeast is a specific type of yeast called Saccharomyces cerevisiae.

But nutritional yeast could not be further away from the quick-rising yeast used to make bread.

In bread dough, “activated” yeast eats (metabolizes) all the starches and sugar in the flour. As it eats, it gives off carbon dioxide, which causes the bread dough to rise.

Nutritional yeast is “deactivated” yeast, which means that it’s killed in the production process. It doesn’t need to “eat” anymore. Therefore, it can’t do much other than be a powerhouse of vitamins and minerals. And taste delicious, of course.

Nooch comes in powder or flakes. It has an admittedly “love it or hate it” taste. It’s extremely flavorful, with an equally strong aroma.

It has powerful hints of nuttiness and cheesiness. It’s salty and savory, and it hits that umami note, too. Its texture is equally distinctive. When used in soups and sauces, it thickens similarly to corn starch. Its mouth-feel is hearty and robust.

So when searching for ingredients to use instead of nutritional yeast… you’re looking for things that approximate the taste, texture, mouth-feel, and heartiness of nooch.

And there are several good options out there.

If you’ve been wondering how to replace nutritional yeast in a recipe, I’m confident at least one of these will do the trick for you!

Like nutritional yeast, chickpea flour (aka gram flour) is packed with protein and B-complex vitamins. I especially like this alternative because it offers a similar flavor and nearly identical powder texture for sprinkling on popcorn or baked potatoes.

I recommend that you also toast (or even fry) the flour in the oven. Spread a thin layer on a sheet pan and bake at 300 degrees Fahrenheit for a few minutes. Toasting it really brings out its nutty flavor profile.

If you’re looking to make a creamy vegan cheese sauce, white miso paste is a great nutritional yeast substitute. White miso is made from fermenting soybeans with rice. It’s a tad sweet when eaten alone, but it also has a slight tang from fermentation.

It’s that little hint of acid that makes it a fantastic vegan cheese addition. White miso paste also has a cheese-spread texture, which helps all around.

If you’re substituting white miso for nooch in a vegan cheese sauce recipe, be sure to use only about ⅓ as much as a replacement.

I know it’s unlike me to recommend anything that’s especially high in sodium. But I can’t ignore how effective this replacement can be, especially for sauces.

Umami is a wonderful thing. When that unmistakable savoriness fills your mouth, it’s difficult not to love every minute of it. Most foods that deliver this distinct flavor sensation are either rich in salt or just taste salty.

Nooch and soy sauce perform the same function on your tastebuds. But remember! Whenever you use reduced sodium soy sauce to replace nutritional yeast, be sure that you reduce what the recipe calls for by at least ⅓.

I love mushrooms. And dried porcini mushrooms are one of my favorite replacements for nutritional yeast.

When you first discover the culinary world of dried mushrooms, it opens up lots of new possibilities for your palate. (And yes, mushrooms are vegan—they’re fungi, just like nutritional yeast.)

You can dry and chop any kind of mushroom. Most of the difference in taste will be in the level of intensity. For example, oyster and shitake mushrooms have a very mild flavor, even when dried.

Dried and chopped porcini mushrooms are powerful in flavor and texture. They pack a punch, and they will make hearty any soup or sauce they touch. Their nutty, woodsy flavor makes them a perfect nooch replacement.

I recommend dried and fried onion flakes as a substitute for nutritional yeast only if you’re looking to swap out a small amount of nooch! We’re looking for healthful ingredients, not mounds of saturated fat.

If you’re looking to shake up your standard popcorn topper, dried and fried onion flakes as indulgent as it gets. When you fry the flakes, you’re losing most of the nutritional value of the onion—but you’re gaining one whopper of a snack.

As long as you take it easy with the shaker, you deserve to enjoy this bold and salty smorgasboard of flavor.

This one was new to me until recently.

You wouldn’t think the hearty yet sweet cashew could pull off the savory strength of nutritional yeast. And yet, when you grind it into a powder, it does!

Many vegan “parmesan cheeses” actually use a combination of nutritional yeast, cashews, and salt to approximate (and improve) the salty crumble of dairy parmesan.

If you’re not sure about this one, experiment with using equal parts nutritional yeast and cashew powder in a recipe that calls for vegan cheese sauce. Once you get the proportions right, you can swap out for 100% cashews when you need to.

Liquid Aminos seem to be a staple in every vegan’s pantry. If you’re new to this miraculous liquid, think of it as a milder version of soy sauce.

Many liquid aminos contain free amino acids, which are amino acids that don’t even need to be digested to do their job building proteins. So, this is a great source of protein.

Other liquid aminos are made from fermenting salt and water with coconut sap to create a savory, salty, and nutty liquid with a little bit of sweetness at the finish.

You can add liquid aminos to any food for an extra dose of protein. Just remember: Liquid aminos are quite salty (but not as much as soy sauce). So if you’re replacing nutritional yeast, adjust the recipe as needed.

Vegetable bouillon cubes have come a long way. There are lots of brands now that don’t add MSG to these cubes of condensed vegetable stock. There are even more recipes for making your own bouillon via dehydrator or oven.

I personally use this vegan “Better Than Bouillon” paste because it’s quick, easy, and lasts forever in the fridge. It provides good nutrition and a complex flavor profile.

Unless you’re making your own bouillon, be conservative with how much you use as a nutritional yeast replacement. Bouillon is very salty, so keep that in mind when using it to thicken sauces or sprinkle on roasted veggies.

Brewer’s yeast is a promising alternative to nooch if you don’t have a yeast-sensitivity.

I have to admit that in terms of taste, I much prefer nutritional yeast. But brewer’s yeast has a lot going for it in terms of thickening capabilities. And it has most of the same nutritional benefits, as I covered in my post “Nutritional Yeast vs Brewer’s Yeast.”

Brewer’s yeast is most commonly used to make beer. As you’d expect, anything you use this yeast for will have a slightly hoppy and bitter taste. If you’re a fan of IPAs, you’ll be in heaven, probably.

Use brewer’s yeast instead of nutritional yeast when you’re making a cheese sauce or hearty soup. Your vegan cheese sauce won’t necessarily rise like bread but it will be much thicker than any of these other alternatives.

There’s a reason why nutritional yeast is the main ingredient in most vegan parmesan recipes. If you eat dairy, parmesan cheese is a convincing non-vegan alternative for nutritional yeast. The two ingredients share many of the same taste qualities and thickening possibilities.

Both of these ingredients have similar nutty, salty, and deep earthy flavors. However, they greatly differ in health and nutritional benefits. Parmesan cheese is high in saturated fat, which is one of the primary drivers of heart disease in adults.

On the other hand, nutritional yeast is high in B-12, B-complex vitamins, and trace minerals. It has been shown to improve digestion, support the immune system, and boost energy levels.

Nooch is a healthy and versatile ingredient—but the taste is polarizing, and it can be intimidating to many. Fortunately, when it comes to choosing an alternative, there are many high-quality options out there.

When choosing a replacement, consider what’s most important to replicate: taste, texture, mouth-feel, or heartiness. Also, keep in mind the amount of nooch you’re looking to replace. Don’t over- or under-do it!

If possible, choose alternatives that deliver nutritional benefits in addition to flavor. And when in doubt, experiment with other ingredients that also seem promising as nooch replacements. You may just discover the next best substitute for nutritional yeast yourself!

Note: If you simply need help finding nutritional yeast in the store, I also have a post showing where to find it in the grocery store.