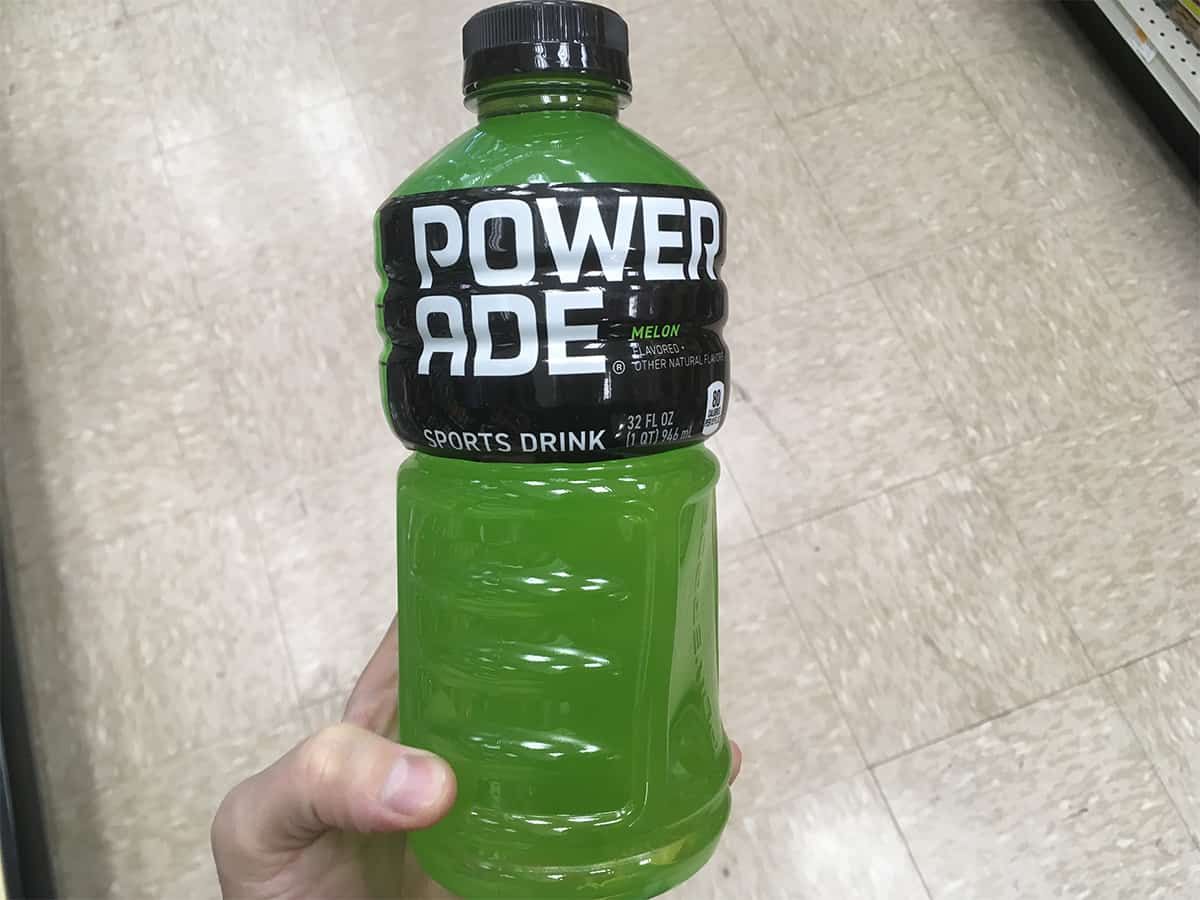 There is so much contradicting information out there about what ingredients are vegans. Add to that the fact that some ingredients aren’t labeled as to whether they come from animals or plants. It’s rarely black and white. So what about Powerade and other sports drinks?

Is Powerade vegan? Powerade is generally considered vegan. It contains a few “gray area” ingredients like sucralose, which was tested heavily on animals during its development, and “natural flavors,” which is hard to confirm as 100% vegan. That said, most vegans are comfortable with drinking Powerade.

Below, we’ll get into all the details of why or why not you should drink Powerade as a vegan. We’ll also explore the differences between the various flavors and products from Powerade!

Checking Ingredients as a Vegan

Whether you’re starting the vegan lifestyle or are a veteran vegan, you’re familiar with how to check all the ingredients on what you eat or drink.

Companies can sneak all kinds of little animal ingredients into their products. But don’t fret! You’ll start to recognize certain ingredients and different names they can be called.

Once you know what ingredients you’re dealing with, then it’s up to you to determine what you feel comfortable eating based on what we talk about in this article.

Veganism is about what you believe in and feel strongly about, so there isn’t one right way to be vegan. Even though the community can be divided by certain debates.

Questionable Ingredients in Powerade for Vegans

As I mentioned above, most vegans are fine with drinking Powerade. That said, if you want to be strict about not allowing any animal byproducts in your diet, let’s take a closer look.

Some possibly questionable ingredients to look out for in Powerade drinks are:

These are the “gray areas” that keep Powerade from being 100% vegan to the most strict vegans.

If a manufacturer doesn’t explicitly label their product, it’s difficult to know if some of these ingredients are animal-derived.

Whether or not you identify these ingredients as non-vegan is up to you. Many vegans are fine so long as they know that no major animal products are directly listed, while others are uncomfortable with any possible connection back to putting animals in harm’s way, so they avoid it.

Does the Flavor of the Powerade Matter?

There are different flavors of Powerade available, so we can discuss which may have more or less of the above “gray area” ingredients in them.

Again, there may not be actual animal products or byproducts within any of the drinks, but they could have been made with them. The vegan community is still divided on whether or not that makes these drinks vegan or not. Personally, I think they are vegan enough.

The main difference between Powerade and Powerade Zero for vegans is that Powerade Zero contains more artificial sweeteners like sucralose. As mentioned above, these ingredients were heavily tested on animals in development.

That said, most people still consider Powerade Zero to be vegan.

You also have to consider the health impact of drinking these drinks, too. While they can give you some vitamins, the sweeteners (including artificial sweeteners) are questionable from a health perspective. I covered the health risks of sucralose in my post all about sucralose.

So, although Powerade Zero may be vegan, it’s not necessarily that healthy.

Some people would argue that you are better off drinking regular Powerade rather than Powerade Zero, in terms of healthiness. Even if normal Powerade has more calories, you’ll have less artificial ingredients in your body.

Many people turn to a vegan diet for its health benefits. So health is likely at the front of your mind when making choices, as well. Well, it’s one thing to be a practicing vegan and another to do it in a healthy way.

Artificial ingredients are processed with chemicals, which our bodies aren’t made to digest naturally. While these ingredients are hard to avoid, it’s good to eat or drink them in moderation.

It’s always advisable to fill your diet with more whole foods that our bodies were made to eat while also adhering to the vegan lifestyle.

This probably doesn’t need to be said, but Powerade is not a whole food.

If you’re trying to adopt a healthy plant-based diet, you should sign up for Nutriciously’s free e-mail course. You get 6 emails over the course of 10 days, and you get up-to-speed fast.

You’ll learn why to go vegan and how to do it, with a meal plan, shopping list, tips for traveling, and more. I love Nutriciously’s guides—get this free e-mail course at the least!

Making a Homemade Alternative to Powerade

An alternative to Powerade is to make your own sports drink, so you can control the ingredients that you put into them.

This can be done by blending or juicing various fruits and vegetables. The juices from them give a natural flavoring that Powerade drinks create artificially.

Here is one example of a healthy vegan homemade Powerade alternative. Notice that it’s sweetened with fruit like watermelon and strawberry.

If you want to add some extra sweetener to your homemade sports drink, I recommend trying erythritol. It’s the one artificial sweetener which appears to actually be health-promoting, with an antioxidant effect. It’s naturally found in pears and grapes. You can buy packages of it here (Amazon).

Only you have the power to decide whether Powerade belongs in your diet. We’ve discussed how the vegan community is divided about whether minor ingredients like “natural flavors” are considered vegan.

Many people in the vegan community (including me) are not concerned by these ingredients since they aren’t directly listed as animal products and they are not present in great volume.

Debates like this will rage on in the vegan community—so just decide what’s right for you.

There is also the healthfulness of the drink to consider.

Powerade, especially Powerade Zero, has a lot of artificial sweeteners. So, even if you do consider Powerade, you might consider drinking them in moderation for your health.

Drinking Powerade, Gatorade, and Other Sports Drinks as a Vegan

All in all, trust your gut. If you normally try to avoid “natural flavors,” sucralose, or other “gray area” ingredients due to the possibility of animal products or health risks, then you can keep doing so with these drinks.

If you aren’t bothered by that since we don’t specifically know they were made with animal products, then enjoy them!

If you want to learn the skill of checking if products are vegan at the grocery store, read my full guide on how to check if a food is vegan or not.