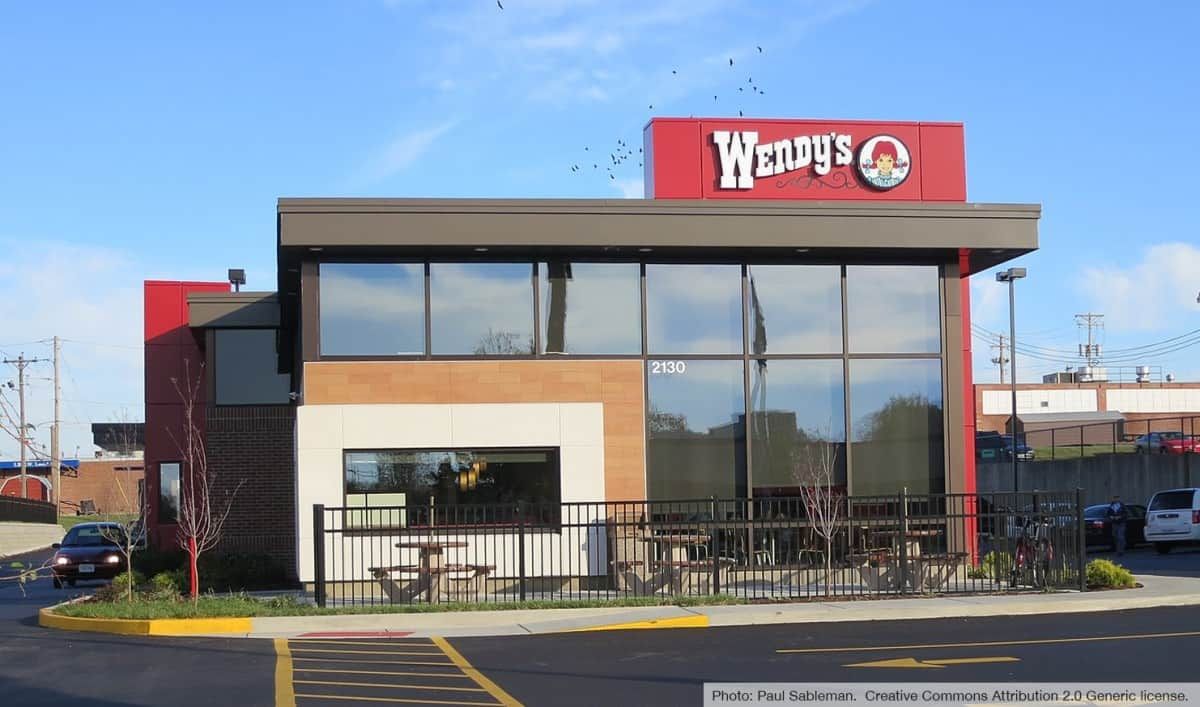 Fast-food burger joints are not my favorite place to eat as a vegan. Usually, the only obvious vegan option is french fries… But Wendy’s is a little better than average. Let’s see what they’ve got.

Below, I’ll share how to custom order each of these menu items to be vegan! I’ll also share some surprisingly NOT vegan items—and I’ll answer common questions about the vegan dipping sauces, the chili, and the Wendy’s black bean burger.

And I’ll end the post with a whole-food plant-based (WFPB) menu—for the vegans who also want to avoid processed oils and sugar!

The following vegan menu was assembled mainly by reading the ingredients lists and allergen warnings on Wendy’s official menu on their website.

I also cited other news stories and blog posts with ideas for how to eat vegan at Wendy’s—all to create the ultimate vegan guide to Wendy’s.

Keep in mind that menu items frequently change and may vary by location. Always ask the staff at your location if you want to be sure about some ingredients.

Wendy’s fries are cooked in vegetable oil—unlike some restaurants that use animal fat—so they are vegan friendly.

Just to be clear, the Pub Fries, Baconator Fries, and Chili Cheese Fries are not vegan—if that wasn’t obvious!

Note: The French Fries are cooked in the same fryers as menu items containing meat and fish. Some vegans may want to avoid it for those reasons—but others of us are fine with that.

When you order “Plain Baked Potato,” it actually only comes standard with only one ingredient: Potato. Which is great for excluding unhealthy oils and animal products. But it can be a little bland.

You may want to ask for one or more of these to season your baked potato:

Note: Just to be sure, I would emphasize in your order that you want the baked potato without butter, cheese, or sour cream—no dairy!

3. The Plantiful Burger (Canada Only)

Wendy’s is currently testing a vegan burger made of pea protein in their Canada locations. Although the Plantiful Burger comes standard with mayo and a slice of cheese, you can order it vegan. (source)

Unfortunately, most Wendy’s locations outside of Canada do not offer a vegan burger yet. But see below for some creative options to put together a hodge-podge vegan sandwich at Wendy’s.

These are pretty dang delicious—seasoned, fried potato wedges. You may see them listed as Breakfast Seasoned Potatoes or Homestyle Potatoes. But it’s all the same thing.

Note: These are cooked in the same fryers as the meat and fish. Some vegans may want to avoid it for those reasons—but others of us are fine with it.

Wendy’s offers multiple salads, and the options keep changing. None of them come standard as 100% vegan—but you can custom order them since they’re not pre-made.

Here are 3 of the salads currently offered by Wendy’s, and how to order them vegan:

And here are 2 more salads that Wendy’s has offered at least at some locations—so you may see them:

And here are the options you’re likely to see for vegan salad dressings:

This is just apple slices. It’s an option on the kids menu, but anyone can order them

Isn’t it funny how fast-food restaurants will offer some fruit in the kids meals, but not in the adult meals? Come on—adults need fruit, too!

You can custom order a custom vegan sandwich containing any of the following:

You may need to explain this because it’s not an everyday order: You just want the buns with a bunch of these vegan toppings and stuff inside.

You can also potentially order these sides and add them to the sandwich:

Might sound strange, but I saw several bloggers have posted about making a “Fry Sandwich” at Wendy’s. So there must be something to it!

This is not on the actual menu, but at most Wendy’s locations, you can get them to give it to you. That’s because they have chips and salsa on hand from their Taco Salad.

Aside from a couple beverages that include dairy, almost all the drinks at Wendy’s are vegan:

Note: The Frosty-ccino Iced Coffees are not vegan, as they contain milk.

Here are some menu items at Wendy’s that you might hope would be vegan—but they’re not:

Frosties are not vegan, as they contain real dairy milk. Hopefully, Wendy’s will release a plant-based Frosty with almond milk, soy milk, or other milk alternative in the future.

Wendy’s Sweet and Sour Sauce is considered vegan. The ingredients list does not include any dairy, egg, honey, or other animal ingredients.

Here are the ingredients for Wendy’s Sweet and Sour Nugget Sauce:

Wendy’s BBQ sauce is considered vegan. It contains no honey, anchovies, or other animal products.

As I explained in my full post on whether BBQ sauce is vegan, honey and anchovies are really the two biggest villains to look out for.

Is Wendy’s Chili Vegetarian or Vegan?

Wendy’s chili is not vegetarian or vegan. It contains ground beef and milk ingredients.

Here are the ingredients listed for Wendy’s Chili on their website:

Does Wendy’s Have a Vegan Burger?

Wendy’s has a vegan burger patty only in Canada. Wendy’s Canada locations are testing a product called The Plantiful Burger, which comes standard with mayo and cheese, but can be custom ordered to be vegan.

Wendy’s has also tested a black bean burger in the U.S. in the past—but it seems to have not been successful and was discontinued. (source)

Most Wendy’s locations around the world do not offer a vegan burger patty of any kind.

Wendy’s Fries are generally considered vegan. They are cooked in vegetable oil, not animal fat or lard. They are also not seasoned with any milk ingredients.

The only controversial issue is that they are often cooked in a shared fryer with animal products. But most vegans are okay with that.

Here is the full ingredients list for Wendy’s fries:

What if you’re not just vegan, but you’re also avoiding processed foods like oil, sugar, and processed grains?

Can you have a whole-food plant-based (WFPB) meal at Wendy’s? Is it even possible?

Granted, this is not a huge list of options—but it’s actually much better than the average fast-food restaurant when it comes to WFPB options.

Really, the baked potato makes all the difference, because you can actually fill up on it. The fact that you can custom add some avocado to it makes it even more filling.

So, as a health-conscious vegan, I would honestly rather go to Wendy’s than most fast-food burger chains!