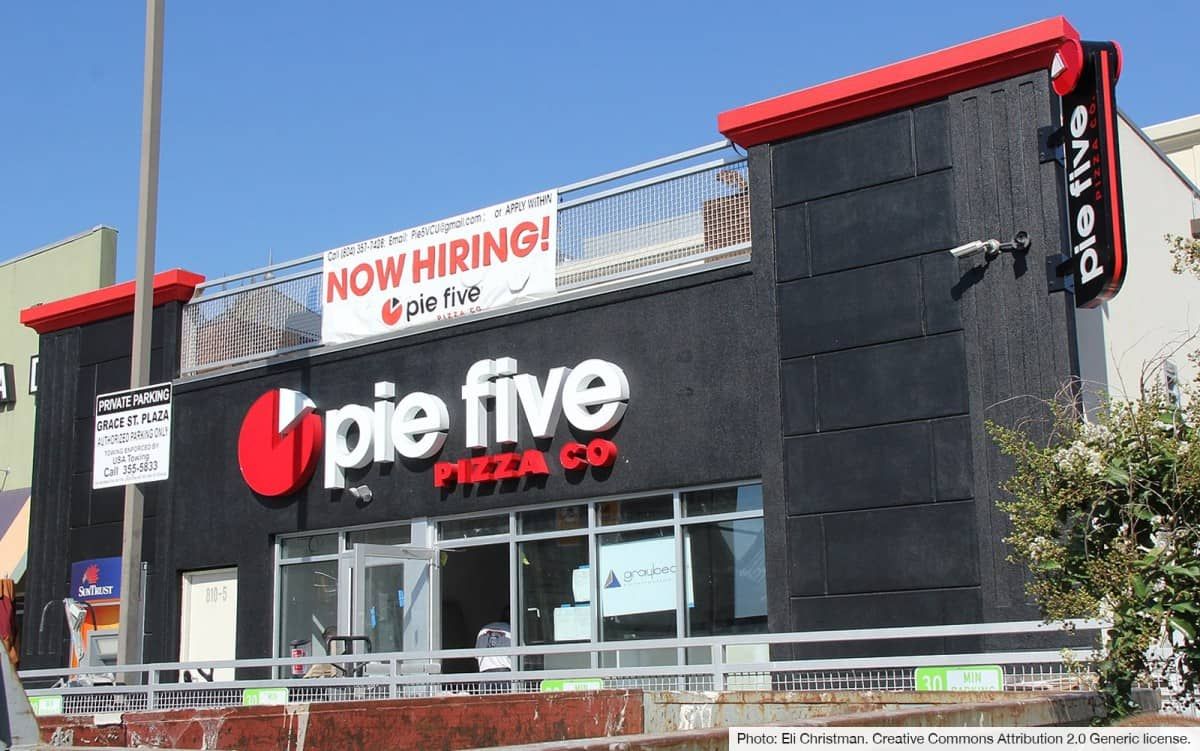 Pie Five is one of the better pizza chains for vegans today. Although they don’t have any vegan meat toppings, they do have vegan cheese! And they have a couple good salad options you can make vegan, too.

Below, I’ll share more about how to order your vegan pizza (and/or salad). I’ll also share a list of menu items that are surprisingly NOT vegan. I’ll end with a look at the whole-food plant-based options, and what’s the healthiest vegan pizza you can order at Pie Five?

The following vegan menu was compiled with the help of the menu, nutrition and allergen info, and FAQ on the Pie Five Pizza Co website.

There are two pre-designed pizzas that are easy to order vegan. You just need to ask for vegan crust and cheese.

2. Build Your Own Pizza

You can also design your own vegan pizza at Pie Five. There are no vegan meats, but besides that, they’ve really got all you could want from a vegan-friendly pizzeria!

Pick one (or more) sauces:

There are no salads that come vegan at Pie Five—but you can veganize a few of them pretty easily. These are the two that are closest to vegan to start with, and how to order them vegan:

Here are the full ingredients for the gluten-free crust, which is vegan:

And here are the ingredients for the cauliflower crust, which is not vegan:

What if you’re not just vegan but also trying to avoid processed foods? Can you get a whole-food plant-based (WFPB) meal at Pie Five? That means no processed sugar, oil, or flour.

Well, you’d be limited to salad. The pizza crusts are not really “whole grain.” They contain oil and flour. (The gluten-free crust merely contains different kinds of flour and oil, rather than wheat.) So you can’t really get a fully WFPB pizza here.

That said, if you’re not trying to be strictly WFPB, then you could still get a pretty healthy pizza by just loading up with veggie toppings and choosing “no cheese.”

Depending on your nutrition goals, the healthiest sauce might be the Tuscan Marinara Sauce (lowest in calories) or the Olive Oil (sodium-free, no processed carbs). But it goes without saying that the Olive Oil is clearly not WFPB!

If you’re looking for which pizza place has the best vegan options, you may want to look at MOD Pizza, Blaze Pizza, and Mellow Mushroom. They all have vegan cheese.

However, I’ve found there to also be decent options at Papa John’s (breadsticks!) and Marco’s Pizza (cinnamon dessert and smoothies).

I’ve also made vegan guides for: