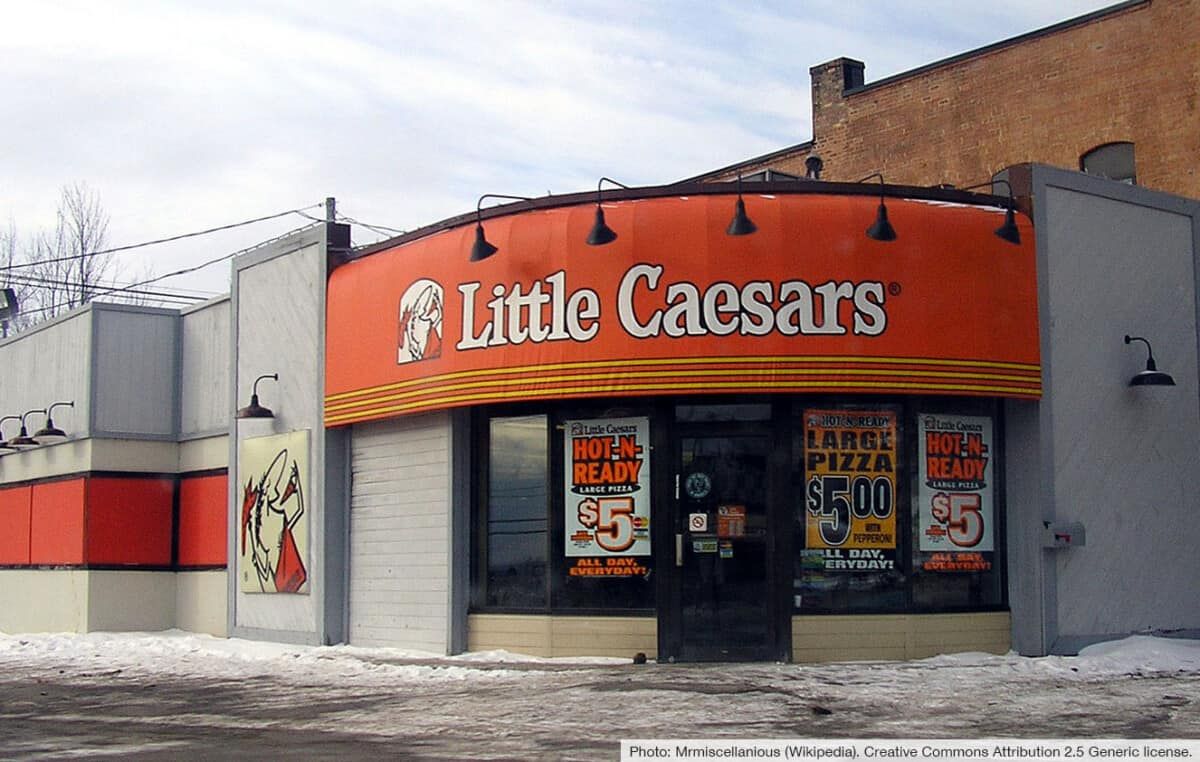 Little Caesars was my favorite pizza place as a kid. Sometimes when I smell garlic today, I still think of Crazy Bread. But I haven’t actually eaten there in over 14 years (ever since I went vegan)! Recently, I decided to actually check if they have anything I can eat.

The big remaining question, of course, is whether Little Caesars Crazy Bread can be ordered vegan. See the full section below on that… it’s complicated. (I called 3 different locations to try to find an answer!)

To make this vegan menu, I consulted the allergen menu and nutritional information on the Little Caesars website, I emailed them multiple times to try to confirm details, and then I actually called 3 locations to ask about the Crazy Bread.

It was much harder to find information on Little Caesars vegan options compared to other restaurants. I recommend checking with your specific store location before assuming the following tips apply to your location specifically.

“Little Caesars’ pizza crust is made with a quality, high-protein flour and contains no animal products or by-products. The sauce is made from crushed tomatoes and is seasoned with a special blend of herbs and spices—it also is made without animal by-products. This means that customers who are strict vegetarians [vegans] can order a Little Caesars vegetable pizza, without cheese, and still fulfill their needs.”

So let’s look at exactly what your vegan options are when ordering that pizza.

You can also get the “Crazy Sauce” (extra marinara) to dip your pizza slices and crust in—it’s vegan.

Little Caesars has no vegan cheese options. However, you can always add your own vegan cheese at home if your pizza feels incomplete without it!

You can typically get a 20-ounce or 2-liter bottle of these sodas, and possibly others depending on your location:

Crazy Bread is not typically vegan, as it contains dairy. However, I received conflicting answers when asking Little Caesars employees from multiple locations whether the Crazy Bread can be ordered dairy-free.

Yes, after getting frustrated with the lack of information on the Little Caesars website and their lack of email responses, I actually called 3 different Little Caesars locations to ask about the Crazy Bread.

Here were the responses:

Location 1: You can get it without butter and parmesan cheese, but we don’t know if the bread itself has dairy or not. (We don’t know if it can be made vegan.)

Location 3: There’s no dairy in the actual bread. (Yes, it can be made vegan.)

So, as you can see… I received directly conflicting information. And really, none of the employees sounded confident, either.

Here’s another piece of evidence against Crazy Bread being vegan: There are “Little Caesars Pizza Kits” that kids often sell as fundraisers. Well, those include Crazy Bread, and the ingredients lists online for those say that even the bread itself contains milk. (source)

So after all the research I did, I still don’t know for sure which of these is true:

Little Caesars does use slightly different ingredients around the world, so it may be worth checking at your location to see if it’s possible to get Crazy Bread dairy-free…

But honestly, don’t expect the employees to know too much about it.

If you want confirmed vegan breadsticks, you may be better off going to Pizza Hut, as their breadsticks can be ordered vegan. And that is also the case at Papa John’s and probably quite a few other places, too.

The garlic dip at some restaurants is vegan, even when it has “Butter” in the name. Often, it’s just soybean oil, not real butter. So I also asked 2 of the Little Caesars employees I called on the phone about this.

I still don’t have a conclusive answer, though.

One of them hesitantly said he didn’t see any butter in the ingredients list… but he also said, essentially, “Don’t take my word for it.”

At the other location, they just flat out said, “We don’t know.”

So, it’s possible that the Butter Garlic Flavor Caesar Dip is vegan, but you may want to double check that with your own Little Caesars location.

I usually try to include a list of whole-food plant-based (WFPB) options for all the restaurant guides I write. WFPB means you’re excluding processed foods, too—not just animal products.

Often, the WFPB menu only includes one or two little side dishes… but Little Caesars is especially void of WFPB options! Pretty much every single menu item at Little Caesars includes either animal products, processed oil, sugar, or flour.

To get a strictly WFPB meal, you’d have to ask them for just some veggie toppings separately… Which would probably be awkward, and not likely to fill you up.

So basically, if you want to eat strictly WFPB, don’t expect to find anything at Little Caesars!

If you’re willing to be flexible, then you can get a pizza without cheese, load it up with veggies, and it’ll still be decently healthy. But it’ll definitely include processed flour and processed oil.