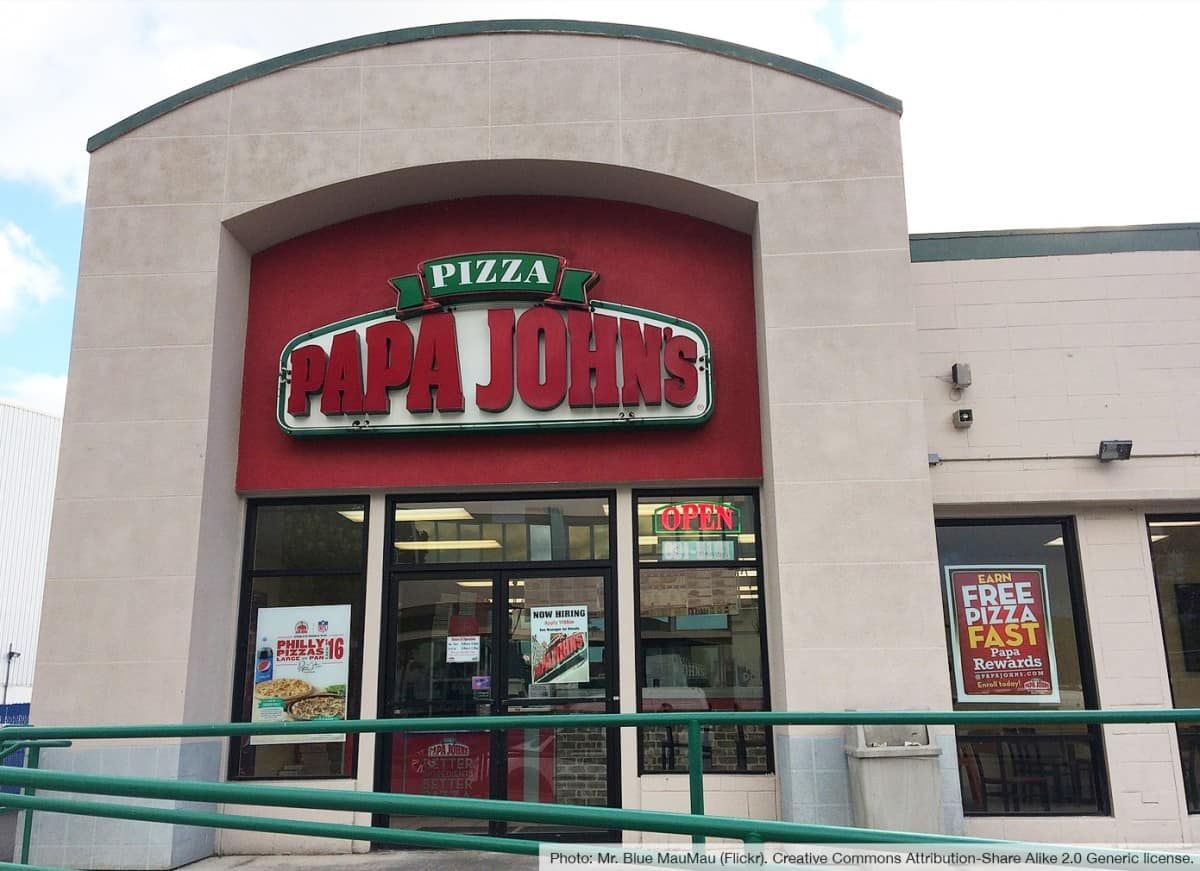 In my 14 years as a vegan, I’ve actually gotten breadsticks and cheeseless pizzas several times from Papa John’s. While they’re not super “vegan-friendly,” they are better than some of the competition.

Below, I’ll share exactly how to order these items vegan. I’ll also answer some common questions about Garlic Knots, vegan cheese, and more. I’ll end by looking at whether you can get a whole-food plant-based (WFPB) meal at Papa John’s!

The menu below was created with the help of the allergen guide and ingredients lists on Papa John’s website. I also sent a follow-up email to clarify some details.

Basically, you’ll probably want to order a cheeseless pizza so it’s vegan. Then you can also get the Original Breadsticks and vegan dipping sauces. That’s what most vegans will order at Papa John’s—in some variation.

But let’s dig into the details:

Pizza dough is usually vegan—but not always. Papa John’s actually has a mix of vegan dough and non-vegan dough. So you gotta choose the right one.

Papa John’s currently doesn’t have any vegan cheese or mock meats as toppings. So you’re mostly looking at vegetables here:

These are the star player of the menu, in my opinion.

I’ve ordered these quite a few times over the years. They’re simple dry breadsticks, but they get the job done. Especially with the Garlic Dipping Sauce (see below).

So you don’t even have to customize your order of these bad boys!

There are a bunch of vegan sauces to dip your breadsticks and pizza crust in. I’ve always like the Garlic Dipping Sauce personally.

Here’s the short list of beverages to choose from:

Let’s answer some of the most common questions about eating vegan at Papa John’s.

Papa John’s Garlic Knots are not vegan, as they contain Parmesan cheese, which is a dairy product. However, that is the only non-vegan ingredient.

Does Papa John’s Have Vegan Cheese?

Papa John’s does not have vegan cheese. However, you can order pizzas without cheese, as their Original Crust is vegan. Then if you wish, you can add vegan cheese at home.

If you’re looking for a pizza chain that has vegan cheese, I recommend checking out MOD Pizza—it’s like the Chipotle of pizza. Other chains with vegan cheese include Blaze Pizza, Pie Five Pizza, and Mellow Mushroom.

Papa John’s Garlic Sauce is confirmed vegan. The main ingredient is soybean oil, and it doesn’t contain butter or any other animal ingredients.

Here are the ingredients to Papa John’s Garlic Dipping Sauce. As you can see, it’s not the healthiest food, but it is 100% vegan:

Papa John’s Pan Pizza can be ordered vegan if you get the Original Hand-Tossed Crust and no cheese. The Pizza Sauce and BBQ Pizza Sauce are both vegan, and there are many options for vegetable toppings.

Does Papa John’s Have Any More Vegan Sides?

Papa John’s only real vegan side is the Original Breadsticks. Here are why the other sides aren’t vegan:

What if you’re not just vegan, but also trying to avoid processed foods? If you’re on a strict whole-food plant-based (WFPB) diet, can you still get a meal at Papa John’s?

Are there any options with no oil, no sugar, and no processed white flour?

Not really. They don’t have any salads. They don’t have fruit sides. There’s no “whole wheat” crust option. This is the full ingredients for the Original Crust (the only vegan crust they have):

So you’re getting processed wheat flour, sugar, and soybean oil (which is a high omega-6 oil—not very healthy). So this is not even close to a WFPB crust.

To eat strictly WFPB at Papa John’s, you’d just have to ask for a bunch of the veggie toppings on a plate. And aside from being a weird order, that wouldn’t be very filling.

If you’re more flexible with your diet, I think you can make a decently healthy vegan pizza here. Just load it up with lots of veggies. As many as possible.

Both of the vegan pizza sauces contain added sugar… but I’m guessing the normal Pizza Sauce has less than the BBQ Pizza Sauce. So I’d go with that one.

Restaurant menus frequently change and vary by location. So I recommend double-checking the information on this page with staff at your Papa John’s location.