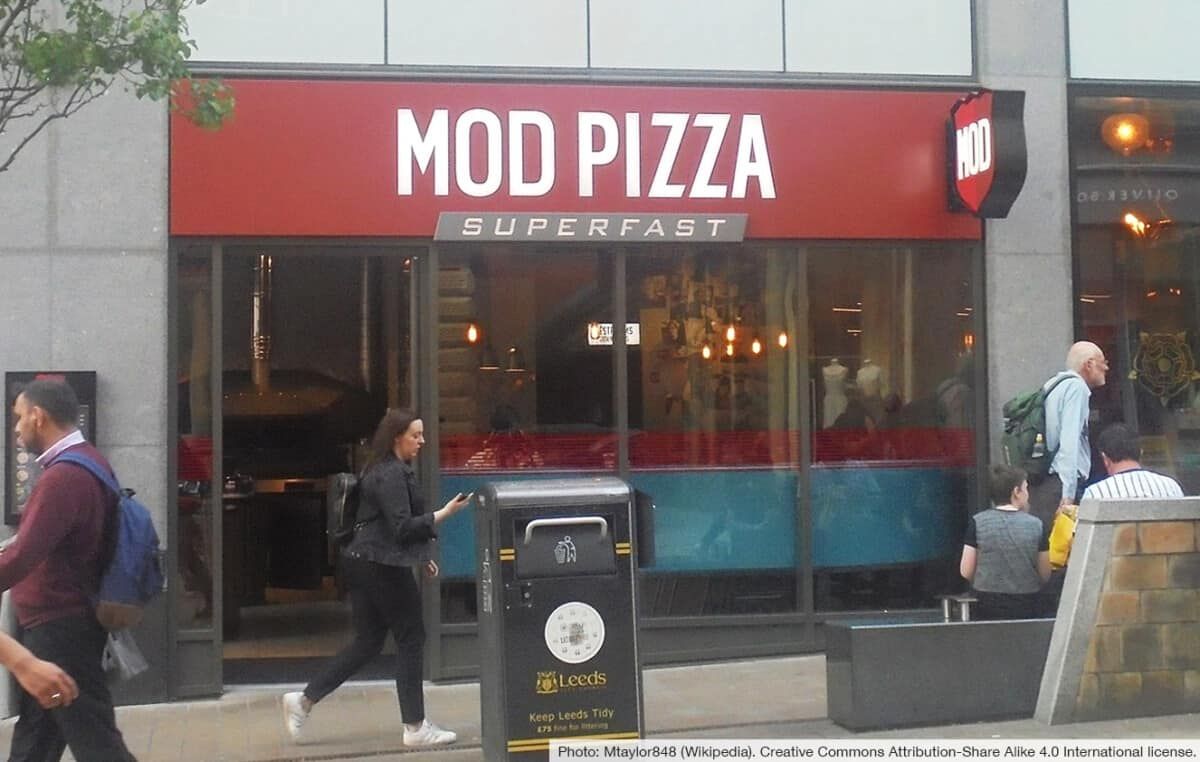 MOD Pizza stands for “Made on Demand” Pizza. It’s like the Subway of pizza places. You get to choose your pizza toppings from a buffet like that, and the pizzas are done fast... But how does MOD Pizza hold up for vegans like us?

More details on all these below. I’ll also answer common questions about MOD Pizza’s Garlic Strips, cauliflower crust, pesto sauce, and buffalo sauce! Overall, vegan options at MOD Pizza are quite good, even without any mock meats or vegan protein sources.

I’ll end the post with a whole-food plant-based guide to MOD Pizza, too, in case you’re trying to avoid processed food, as well.

To make this vegan menu, I consulted the allergen menu and other information on the MOD Pizza website. With 13 years of experience with vegan label reading, I feel confident with what I’ve mapped out here. That said, it never hurts to ask for details with staff at your location.

MOD Pizza has several “Classic” pizza styles. Some of these are vegetarian and can be easily made vegan by just requesting dairy-free cheese instead of cow’s cheese. Just remember to ask for the vegan version specifically.

Here are the options:

You may also be able to vegan-ize other “Classics” on the MOD Pizza menu… But these are the easy ones. Their other pizzas contain pesto, meat, or other details that would be harder to replace with what MOD has on hand.

2. Build Your Own Pizza

You can also build your whole custom vegan pizza. This is what I would recommend. It’s fun getting to dictate exactly what you want on it.

Note: The Cauliflower Crust is not vegan, as it contains cheese and egg whites.

These sauces can be added as a topping on top of the vegan cheese and veggies:

Note: The Sri-Rancha Sauce is not vegan, as it contains eggs and milk.

MOD Pizza has awesome salad options. They allow you to build your own salad completely from scratch, or you can modify their Simple Salad to be vegan.

Note: The Italian dressing is not vegan—it contains cheese.

This is a novel option! A vegan dessert—it’s about time! The Cinnamon Strips themselves are vegan, and the Cinnamon Topping is vegan.

Plenty of choices for vegan drinks:

Alcoholic Drinks: Most MOD Pizza locations also offer draft beer and wine. Depending on the selection at your location, I recommend Barnivore as a resource to check whether the alcoholic drinks are vegan.

Here are some answer to common questions about vegan options at MOD Pizza.

MOD Pizza Garlic Strips are not typically vegan, as they come with parmesan cheese. However, you can ask about special-ordering them vegan. I recently reached out to MOD Pizza to confirm that this modification is possible, and I’m waiting to hear back. If I get an answer, I’ll update this post.

Aside from the parmesan cheese, the only other suspect ingredient is “natural butter flavor.” The butter flavor does not come from real butter, but it’s created with a “garlic butter substitute” which is made of the following ingredients:

MOD Pizza Red Sauce is vegan. It contains no cheese, dairy, meat, or any other animal products. Here are the full ingredients of MOD Pizza red sauce:

What Kind of Dairy-Free Cheese Does MOD Pizza Use?

MOD Pizza Cauliflower Crust is not vegan, as it contains cheese and egg whites. Here is the full list of ingredients for their cauliflower crust:

What if you’re not just trying to eat vegan at MOD Pizza but also whole-food plant-based (WFPB)? Can you fill up as a vegan while avoiding processed foods here?

Unfortunately, the vegan pizza crust options at MOD are not really WFPB. They both contain processed flour and oil. So if you’re being strictly WFPB, you’d have to just go for a big salad.

Since they don’t typically have avocado or other high-calorie WFPB toppings at MOD Pizza, it might be hard to get full eating WFPB here. But you can at least grab a quality salad that you can build up from scratch.

Note: The roasted corn and roasted broccoli toppings do typically include extra virgin olive oil. So avoid those if you’re trying to stick to 100% WFPB.