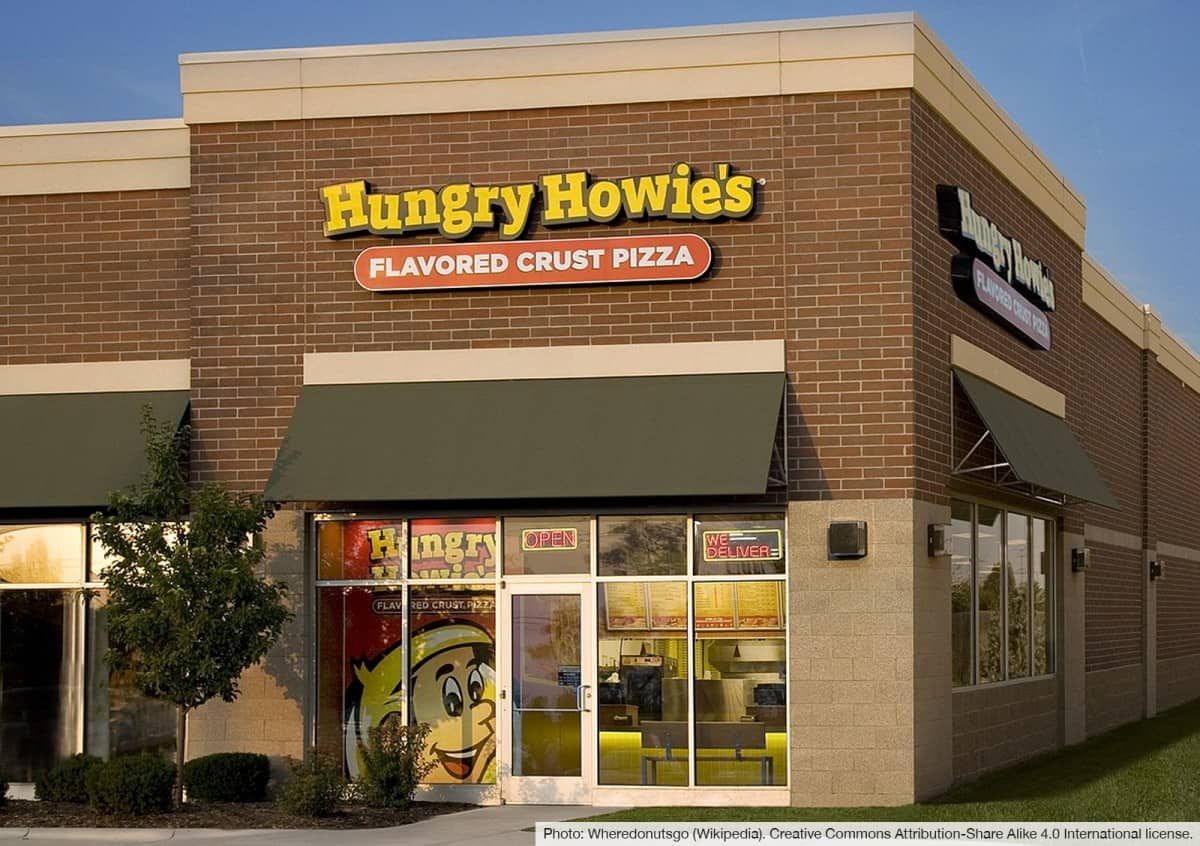 Hungry Howie’s doesn’t have vegan cheese… yet. And they don’t have any “vegan meat” toppings, either. But hey, it could be worse. There are still some options to build a vegan pizza and get a vegan salad.

Below, I’ll share more about how to order these items vegan, and some other menu items that are surprisingly not vegan. I’ll answer questions about the Howie Bread and the Veggie Sub. And I’ll end with a look at the whole-food plant-based options at Hungry Howie’s!

The following vegan menu was compiled with the help of the menu, ingredients lists, and nutrition information on the Hungry Howie’s website.

Restaurant menus change and often vary by location. I recommend double checking any important information with staff at your local Hungry Howie’s!

1. Build Your Own Vegan Pizza

Yes, you can get a vegan pizza at Hungry Howie’s! That said, it won’t have any cheese, and your crust options are limited. Still… it’s better than nothing.

Note: The “Original Round” and “Deep Dish” crusts both appear to contain sodium caseinate, which is a milk derivative.

And there you go—you’ve ordered a vegan pizza at Hungry Howie’s!

After removing the croutons, you get: Tomatoes, cucumbers, red onions, black olives, green peppers, and a “fresh romaine mix.”

Choose any of these vegan salad dressings:

Yes, the “Creamy” Italian Dressing is dairy-free. The top ingredient is soybean oil, just like some creamy garlic sauces I’ve seen before. (Don’t be tricked by how creamy soybean oil can be!)

They should also have the following optional vegan salad toppings, too:

There are quite a few vegan sauces available if you want to get creative with your pizzas or dipping sauce requests:

Note: The Marinara Dipping Sauce is not vegan, as it contains parmesan cheese. And the Chocolate Sauce contains dairy, as well.

There’s a pretty typical selection of Pepsi products and tea:

Does Hungry Howie’s Have Vegan Cheese?

Hungry Howie’s does not have vegan cheese. You can order a vegan pizza without cheese, however. And if you’re really committed, you can add your own vegan cheese at home.

If you’d prefer a pizza place with vegan cheese, then check out MOD Pizza, Blaze Pizza, or a specific vegan-friendly pizzeria in your area.

Hungry Howie’s Bread is not vegan. It comes buttered and topped with parmesan cheese. It’s not clear whether you can custom order Howie’s breadsticks vegan.

At many pizza places, you can order “dry breadsticks” and they will be vegan. This is the case with Pizza Hut breadsticks, for example.

So it may be worth asking about this at your local Hungry Howie’s. That said, I was not able to find the recipe for Howie Bread. So it’s possible there is dairy in the bread itself.

Can You Get Hungry Howie’s Veggie Sub Vegan?

The “subs” at Hungry Howie’s are actually more like calzones if you look at them. They do have a Veggie option, though. It comes with cheese, but can it be made vegan?

Hungry Howie’s Veggie Sub is not vegan due to the cheese and the crust. Since the crust itself appears to contains dairy (sodium caseinate), it does not seem possible to get the Veggie Sub made vegan.

Hungry Howie’s Original Round crust and Deep Dish crust are not vegan. They contain sodium caseinate, which is a milk derivative. However, the Ultra Thin Crust and the Gluten-Free Crust are vegan.

In addition, two of the Flavored Crust options are vegan: Cajun and Sugar & Cinnamon Blend.

What if you’re not just vegan but also trying to avoid processed foods? Can you get a whole-food plant-based (WFPB) meal at Hungry Howie’s?

The only WFPB option at Hungry Howie’s would be the Garden Salad (without croutons). However, all the salad dressings contain soybean oil or high fructose corn syrup. So you’d also have to get the salad without dressing.

You could also theoretically order some veggie pizza toppings… without a pizza to put them on. But that would be pretty weird. So yeah, it’s just a salad for the WFPB folks.