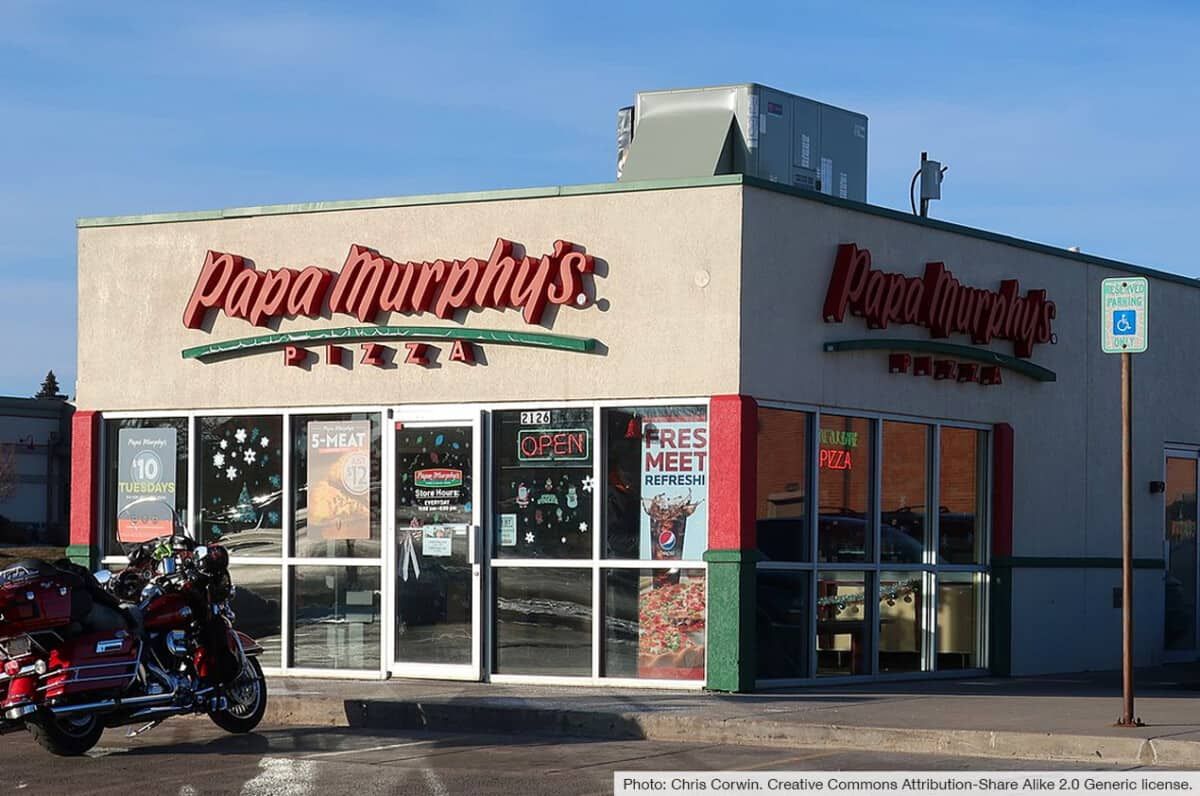 For vegans, choosing a pizza place often depends on the question of whether they have vegan cheese. But although Papa Murphy’s does not pass that test, they still remain an interesting option for many vegans. You’ll see why below.

More details on all these below. I’ll also answer common questions about Papa Murphy’s Cinnamon Wheels, garlic sauce, and all the details on which crusts are vegan and which are not (I was personally surprised).

I’ll also end with a section on eating whole-food plant-based at Papa Murphy’s, in case you’re trying to avoid processed foods, too!

To make this vegan menu, I used the allergy checker and nutrition pages on Papa Murphy’s website. I also followed up with a Papa Murphy’s rep over email to ask some clarifying questions.

Although I feel this is a solidly vetted vegan menu, sometimes different locations will have slightly different offerings. If you’re concerned about a detail, it never hurts to ask the staff at your location and make your vegan voice heard!

Papa Murphy’s has a Garden Veggie pizza which is vegan except for the cheese. So if you don’t want to spend any brain-power on picking your toppings and sauce, just go with that!

After you remove the cheese, the Garden Veggie comes with these standard toppings: Black olives, green pepper, mushrooms, onions, and tomatoes.

2. Create Your Own Vegan Pizza

There are four vegan crust options at Papa Murphy’s:

Note: The Gluten-Free crust is not vegan—it contains egg whites.

Next, here are the vegan sauce options:

You can also get a cup of extra marinara sauce to dip your pizza in.

Lastly, here are the vegan toppings. You can get these in the normal amount or “Extra”:

In addition to pizza, you can get a salad at Papa Murphy’s.

If you ask to get the Garden Salad without cheese, you’ll get: Romaine lettuce, green peppers, Roma tomatoes, and black olives. (You may also want to specify that you don’t want croutons.)

Unfortunately, Papa Murphy’s doesn’t typically have any vegan salad dressings. Their 1,000 Island dressing contains eggs, and all the others contain milk—even their balsamic vinaigrette.

But if you’re taking your meal home to eat anyway, this is actually fine. Just use whatever vegan salad dressing you have at home (assuming you have one)!

The Papa Murphy’s near me only offers 2-liters of select Pepsi products:

Does Papa Murphy’s Have Vegan Cheese?

Papa Murphy’s does not have vegan cheese. That said, you can just order the pizza without cheese and add your own vegan cheese before putting it in the oven.

Papa Murphy’s Cinnamon Wheel is not vegan, as it contains multiple milk ingredients

Papa Murphy’s “Gourmet White Sauce” is not vegan, but their “Olive Oil and Garlic Sauce’ is vegan.

Papa Murphy’s dough is generally vegan. The only crust option you need to avoid is the Gluten-Free option, which contains egg whites.

Papa Murphy’s Pan Crust appears to be vegan. Although it is described as “buttery,” it does not contain butter—rather, it uses Liquid Butter Alternative, which is made primarily of soybean oil. You can view the full ingredients by selecting it as an option on Papa Murphy’s nutrition page.

I like to compile a list of whole-food plant-based (WFPB) options at the chain restaurants I write vegan guides for, too. If you’re trying to be a healthy vegan and avoid processed foods, this is the section for you!

Unfortunately, there are very few WFPB options at Papa Murphy’s. Of course, all the pizza crusts contain processed flour and oil. So you can’t get a strictly WFPB pizza.

If you’re flexible about the crust, then you could load up a pizza with vegetables to try to make it healthy on balance. But if you want to be strictly WFPB, the only option is the salad (without cheese, croutons, or dressing).

You may be able to get them to add extra ingredients from your salad that are taken from the list of veggie toppings for pizzas. That’s an idea to bulk up your salad, but this may depend on the staff and whether they’re willing to do it for you. It wouldn’t be standard practice!