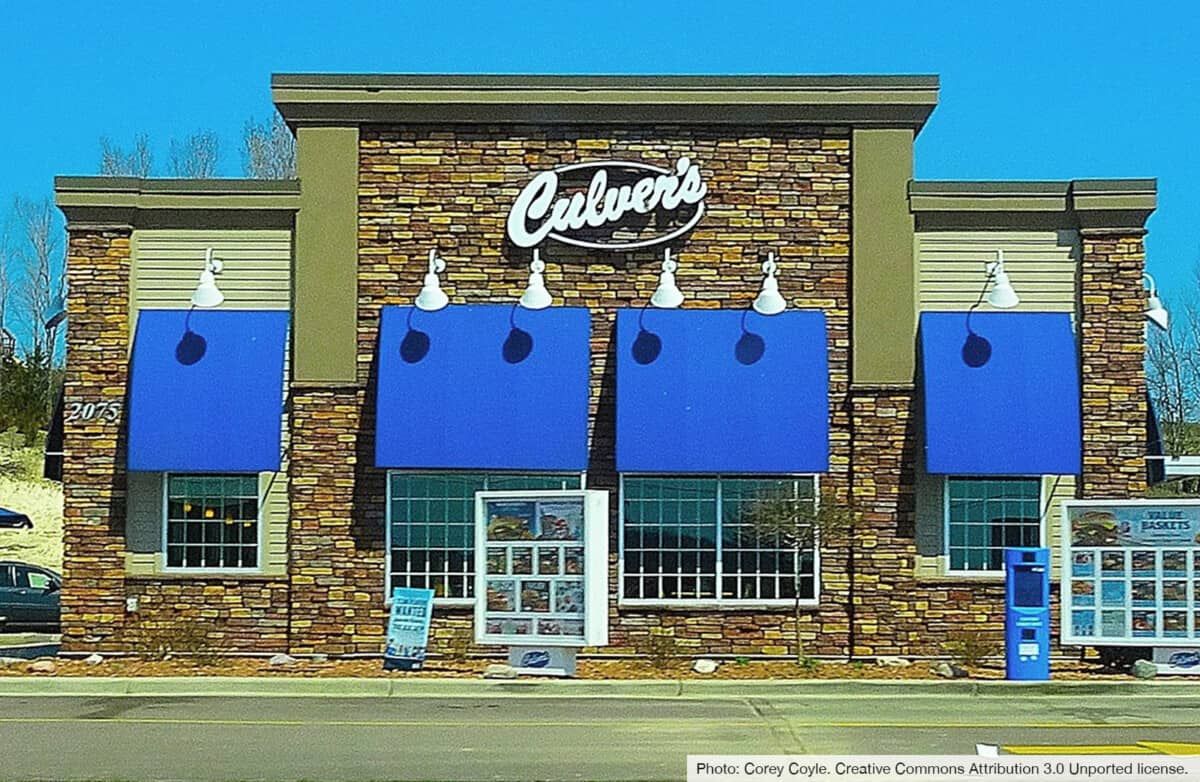 Culver’s is mainly known for “Butterburgers” and frozen custard, neither of which are exactly vegan-friendly. That said, if you know what to look for, there are options. As a vegan with 14 years of dining experience, I’m happy to be your guide.

Below I’ll share how to order these items vegan, a couple more vegan items you might see, and answers to common questions, like whether the Culver’s onion rings are vegan, and whether they have a vegan burger!

I’ll end with a whole-food plant-based guide to Culver’s, for those who are trying to avoid processed foods, too!

I spoke with a Culver’s representative about the vegan options at their restaurants in June 2020. He made the following clear:

“Culver’s is a cook-to-order restaurant, which means we do not begin making your meal until you finish ordering. We encourage you to customize your meal—for example, you can ask for ‘no cheese’ on a salad and our restaurants will be happy to accommodate. Some options to consider are Steamed Broccoli, Salads without cheese, meat and croutons, and Lemon Ice.“

The Culver’s website also has a pretty helpful allergen menu, along with full ingredients lists. The only problem is that some menu items aren’t on the website (like the veggie patty and the Lemon Ice). This made it harder to double-check some items.

Fries are often the saving grace of vegan’s at chain restaurants. At Culver’s we actually get multiple kinds of fries, including these crinkle-cut ones!

Some restaurants, like Buffalo Wild Wings, are known for cooking their fries in animal fat. Is this an issue at Culver’s? No. Culver’s fries are not fried in animal fat.

“Culver’s Crinkle Cut fries are cooked in common fryer oil. Cross-contact with other allergens may occur during cooking.” (source)

Most Culver’s locations also offer Sweet Potato Fries! In case you happen to like those more than fries made from white potatoes.

The dinner rolls at Culver’s at vegan. This vegan roll is a great addition that many similar restaurants don’t have. (At Texas Roadhouse, the rolls are not vegan due to butter.)

You can also do creative things with this roll if you choose, like make a sandwich from the rolls and some of the veggie sides, or with the peanut butter and jelly spreads, etc.

Note: The Udi Gluten-Free Hamburger Bun is often available at Culver’s, but this gluten-free bun is not vegan. It contains eggs.

4. Salads (No Cheese or Croutons)

Culver’s offers two different salads that can be made vegan:

It may not really matter which one you choose, as the ingredients are the exact same once you remove the non-vegan ingredients: Mixed greens, sliced cucumbers, and grape tomatoes.

You could probably get them to add in some other stuff, too. They offer a Chicken Cashew salad, so you could ask to get some cashews thrown in your vegan salad, for example.

5. Steamed Broccoli (or Other Veggies)

I’ve also seen pictures of green beans at Culver’s—but they’re not on the menu as of the time I’m checking. If you see green beans or other vegetables on the menu, just be sure to check that they aren’t cooked with butter, lard, or animal broth.

Different Culver’s locations may offer apple slices or applesauce. These may be on the kids menu, so check there. (But they’re not restricted to only kids. You can get them as an adult!)

Although none of the frozen custard at Culver’s is vegan, you can check for Lemon Ice, which is typically dairy- and egg-free. It’s not showing on their website menu right now, but the custom service rep I spoke to mentioned it as a vegan option.

You can add any of the vegan toppings below to your Lemon Ice, including fruit, nuts, or cookie crumbs.

I’ve also seen something called Lemon Ice Coolers at Culver’s, which is apparently a kind of slushie made with lemonade. Ask about these at your location if they sound good!

The following extras should all be available at a typical Culver’s location. These could allow you to come up with creative options, maybe integrating the dinner roll, the fries, or the apple slices from above.

Lots of vegan drinks to choose from:

And again, you should be able to get something called a Lemon Ice Cooler, which is a kind of vegan slushie made with lemonade.

Does Culver’s Have a Vegan Burger?

Culver’s does not have a vegan burger. They offer a vegetarian patty, but it contains dairy.

Culver’s Onion Rings are not vegan, as they contain whey, which is a dairy product.

You might wonder if any of the following are vegan at Culver’s, but the answer is no:

What if you’re not only trying to eat vegan but also unprocessed, whole foods? Can you do it at Culver’s?

If I was eating strictly whole-food plant-based (WFPB) at Culver’s, this is how I’d do it:

And then I’d maybe ask for some of these toppings (usually used to top the frozen custard). Maybe they could give you a bowl full of some of these:

Note: The nuts may have been roasted with oil.

It would not be a very big, full meal. Probably it makes sense to just bring your own snacks or eat before coming if you’re sticking to a strict WFPB diet.