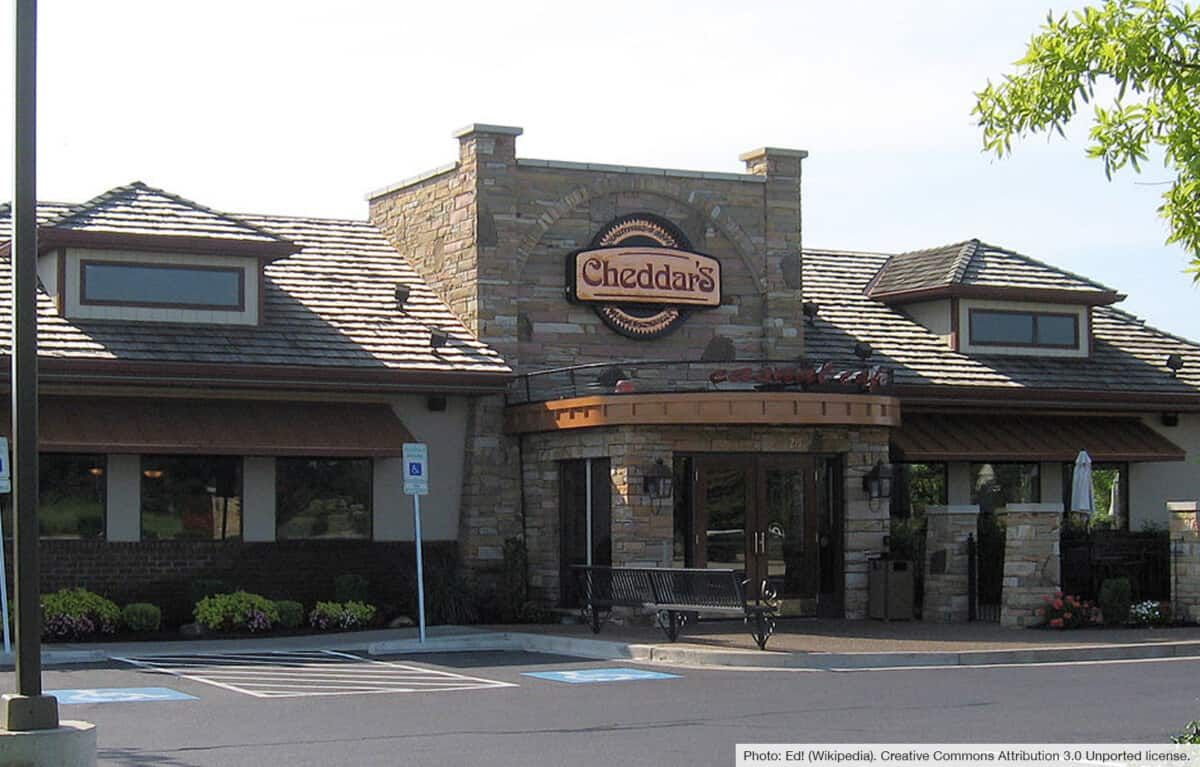 Cheddar’s Scratch Kitchen is not a vegan paradise… There’s no veggie burger, seitan chicken, or anything like that. But there are some decent side options. As a vegan with 13 years of dining experience, I’m glad to be your guide.

Below I also share some creative ideas for how to extend this vegan menu, too, like using the tomato tortilla to make a vegan wrap, special-ordering a salad entree, or bringing a specific type of seasoning to help flavor the meal!

I’ll also end with a whole-food plant-based guide to Cheddar’s, for anyone who is trying to avoid processed and fried foods, too.

I spoke with a Cheddar’s representative in June 2020, and I actually received their official vegan menu. This was super helpful in putting together the following list, and makes me even more confident in making these suggestions!

I then followed up to ask some clarifying questions, so you know you can trust these suggestions.

Tortilla chips with a fully-vegan salsa! Nice option to have to get things started.

Note: The chips may be fried in the same fryer as chicken and other non-vegan options. If this is a deal-breaker for you, then ask at your specific location.

The exact ingredients in the side salad is probably going to vary depending on what they have on hand, but expect greens, tomato, cucumber, and carrot shreds—something like that—once you ask them to hold the egg, cheese, and croutons.

You can also get a larger vegan salad as an entree, if you get more extensive with your ordering instructions. I got this tip from the Cheddar’s rep I spoke to:

“You are able to order our salads without croutons, cheese, glazed pecans, and chicken to make them vegan if you were wanting an entire entree.”

I’m not exactly sure why the glazed pecans aren’t vegan. Maybe they’re glazed with honey or a glaze that contains dairy or egg.

Broccoli is one of the vegetables you’ll see prepared vegan more often at restaurants because it’s usually steamed rather than cooked in broth or butter.

However, you need to order Cheddar’s fresh broccoli “without the butter blend.” Then it’s fully vegan.

French fries are the classic option for vegans stuck at a chain restaurant with family members (ha ha). Only occasionally do restaurants fry them in animal fat, making them non-vegan (like at Buffalo Wild Wings).

Cheddar’s doesn’t disappoint here, with vegan fries on the menu!

Note: The french fries may be made in the same fryer as chicken and other non-vegan options, however. If this is a deal-breaker for you, then ask at your specific location.

The official Cheddar’s vegan menu I received included a tomato tortilla. This means if you want to get creative, you could put together some kind of wrap or soft-shell taco.

Granted, they don’t have a ton of great things to put in it. But there are a few options.

Here are some thing they’d likely have available to put in your tortilla:

There are a few other options on the menu that look like they could be vegan, but they’re not vegan:

I asked the representative from Cheddar’s if any of these could be made vegan, and this was their response:

“I don’t believe these items can be modified just due to our preparation tactic, which is making large batches of each side to keep up with the demand. However, it certainly does not hurt to inquire with the manager on duty, as we are a scratch kitchen and can definitely see what we can do for you!”

So if you want to ask about getting some vegan carrots, green beans, corn, or rice, go ahead and ask!

What if you’re trying to avoid animal products and processed and fried foods? What can you get that’s actually whole-food plant-based (WFPB) at Cheddar’s?

Here’s what I’d do for a WFPB meal at Cheddar’s:

It’s never a bad idea to bring nutritional yeast to a restaurant, but especially if you’re trying to eat WFPB, nooch is a great way to add flavor without adding oil, sugar, or anything else processed.

If you’re willing to stretch a little on your WFPB diet, you could include the tomato tortilla (but it’s going to contain some oil and white flour). Then you could get some more calories and wrap up more veggies at once.

But really, Cheddar’s is not the best place to eat a full vegan meal, especially not a WFPB one.