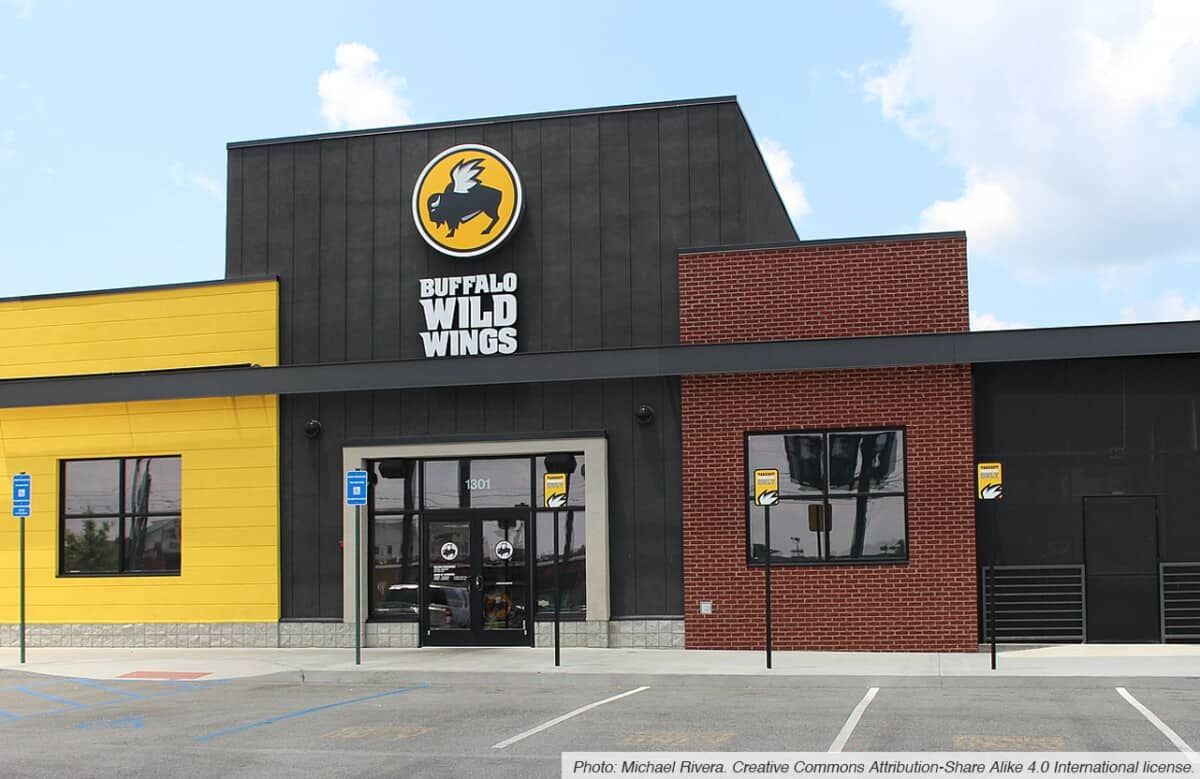 So you’re taking a trip to Buffalo Wild Wings, the most vegan-friendly restaurant on the planet, huh? Just kidding. We all know BWW is not the best place for vegans. But if you know what to look for, there are still some options.

Notably, the french fries, chips, and other fried foods at BWW are not vegan, as they are fried in beef shortening. The black bean burger is also not vegan, as it contains eggs in the patty.

More details on all these options are below, along with other common vegan questions about Buffalo Wild Wings, recipes to make vegan wings at home, and an interesting vegetarian lawsuit against BWW!

On the BWW allergen and prep guide, they specify that no BWW food can be certified as vegan, vegetarian, or gluten-free due to the many suppliers they use. But we can still build a menu of foods we have every reason to believe are vegan.

Let’s start by noting a few menu items you may expect to be vegan but are sadly not.

[The allergen menu says the tater tots are not fried in beef shortening, but this is likely an error. I’ll update this post if I can get confirmation.]

These are tragic losses for us vegans—not even the fries are vegan? But enough moping. Let’s dive into the vegan options they do have!

Thank God—at least the soft pretzel is vegan. Many of the other vegan items below are veggies and quite low in calories, so it’s good to have a starchy option like this pretzel.

You’ll need to swap out the queso dipping sauce. Luckily, they have plenty of other vegan sauces you could use as a dip, including a few versions of BBQ sauce and teriyaki sauce. See the full list of vegan sauces below.

What about the Pretzel Knots? BWW has recently added “pretzel knots” to their menu. They come standard with dipping cheese and honey mustard, so it’s not vegan the standard way you order them. They also contain eggs according to the BWW allergen menu. You may be able to order these vegan, but I wouldn’t assume that. Ask your server.

2. Side Salad (No Cheese or Croutons)

You can order a vegan side salad at BWW by just specifying that you don’t want any cheese or croutons. It’s not a very big or robust salad, but it’s something—and it’s a healthy option!

Beware that the Caesar dressing is not vegan, either—it contains anchovy. I’m not sure what selection of dressings they’ll have on hand, but it’s likely they’ll have vinaigrettes or balsamic vinegars that are vegan, at the least.

You can also have them put some avocado on your salad, and then you’ll be getting healthy fat from that—even without dressing.

B-dubs also has a more involved option called the Santa Fe Salad, which comes with corn, pico de gallo, and avocado. But it also comes with more animal products—chicken, cheese, and ranch dressing. You can try to order a vegan version of that, and see what they can do for you.

Here’s a simple, healthy vegan side for you. I think you can order carrot sticks, celery sticks, or a combination of both. Order it without the ranch dressing, as it contains milk.

See below for a list of other vegan sauces you could order to dip with instead, or just bring your own vegan dipping sauce if you know what you like. (Peanut butter would actually be good.)

The kids menu features a mandarin orange, which is basically a clementine or a mini-orange. They’re small and easy to peel.

One time I ate over 10 mandarin oranges when I was at an event and it was the only vegan food they had. Honestly, it wasn’t a bad way to spend my time. I love that a restaurant like BWW has these on hand.

Another little vegan side: Coleslaw! According to the allergen menu, it looks like this comes vegan—but you may want to check with your server to make sure.

Some BWW locations offer a side of plain white rice. This could be spiced up a bit with some of the vegan sauces listed below.

The allergen menu says “Hawaii only” for the rice, so it may be unlikely to find it elsewhere. But having another source of starch would be a significant win, so I wanted to include this!

The hamburger buns at BWW are vegan according to their allergen menu. The wraps or flour tortillas also appear to be vegan, but that may vary based on suppliers used at each location.

Some other vegan BWW guides online have suggested putting together a custom vegan wrap, soft-shell taco, or similar. This is a pretty neat idea, but don’t expect it to be robust or very filling.

You can start with the hamburger bun or flour tortilla, then add some of these:

You also might want to incorporate some of the sauces or seasonings from the next section below.

According to the allergen menu, the sauteed white onions are not cooked in beef shortening.

The majority of sauces and seasonings at Buffalo Wild Wings are vegan. You could use these to season your rice, dip your soft pretzel in them, or maybe even dip your carrots or celery in them (if that is appealing).

Not vegan (even though they sound like they could be): Medium, Mild, Original Buffalo Sauce, Spicy Garlic, Thai Curry.

Most vegans might not want to plan to eat much at BWW. Instead, just have some drinks and watch the game.

There are plenty of vegan drink options at BWW—alcoholic and non-alcoholic.

Alcoholic drinks: They have a wide variety of cocktails, wine, and beer. The majority of these are vegan, but some (especially some wines) may not be due to non-vegan fining agents like isinglass (from fish).

The best resource for vegan alcohol is Barnivore. Consult that site if you have further questions on the alcoholic drinks.

Whenever I make these vegan guides to chain restaurants, I like to also list the whole-food plant-based (WFPB) options, too. This is interesting since many of the vegan options are often fried and unhealthy.

This is actually better than some restaurants. But obviously, it’s not great. If you wanted to expand your options to include processed grains, you could add the white rice or soft pretzel.

I would focus on getting my server to bring extra avocado. Load up that salad with avo!

I’d also see if I could get several mandarin oranges from the kids menu instead of just one.

Here are some more common questions about vegan and vegetarian options at BWW:

The Black Bean Burger at Buffalo Wild Wings is not vegan. It cannot even be ordered vegan because it contains eggs in the patty.

It’d be so much easier to eat vegan at B-Dubs if they had a vegan black bean burger or garden burger. I almost want to say, “Let’s all email BWW asking them to switch to a vegan one!” But honestly, they didn’t respond to what I sent. So I’m not sure if they even read them!

Are the Fried Pickles at Buffalo Wild Wings Vegan?

Pretty brutal, huh? You thought, “Hey, maybe these harmless pickles might be vegan…” But they’re actually far, far from being vegan!

Buffalo Wild Wings does not have cauliflower wings, seitan wings, or any other vegan mock meats. They do have a black bean burger, but it contains egg in the patty, so it’s only vegetarian, not vegan.

What Does Buffalo Wild Wings Fry In—Oil or Beef Fat?

At most restaurants, vegans can eat the fries, tater tots, and the like. But not at BWW! So sad.

BWW also notes that they do not have separate fryers for different menu items. So the fries are fried in the same fryers as the chicken, for example.

Make Your Own Vegan Buffalo Wings at Home

If you actually want vegan wings—not just some meager vegan sides—then you may want to make them at home! There are tons of great vegan wings recipes. Usually, they’re made from seitan (high in protein) or cauliflower (low in calories).

Just an interesting side note to end with. A few years ago, a vegetarian customer actually attempted to sue BWW for frying its food in beef fat and not making that clear to customers!

In the end, the case was dismissed. But this lawsuit makes it clear why BWW has taken such effort to make it transparent in their allergy menu that its items are fried in beef shortening!