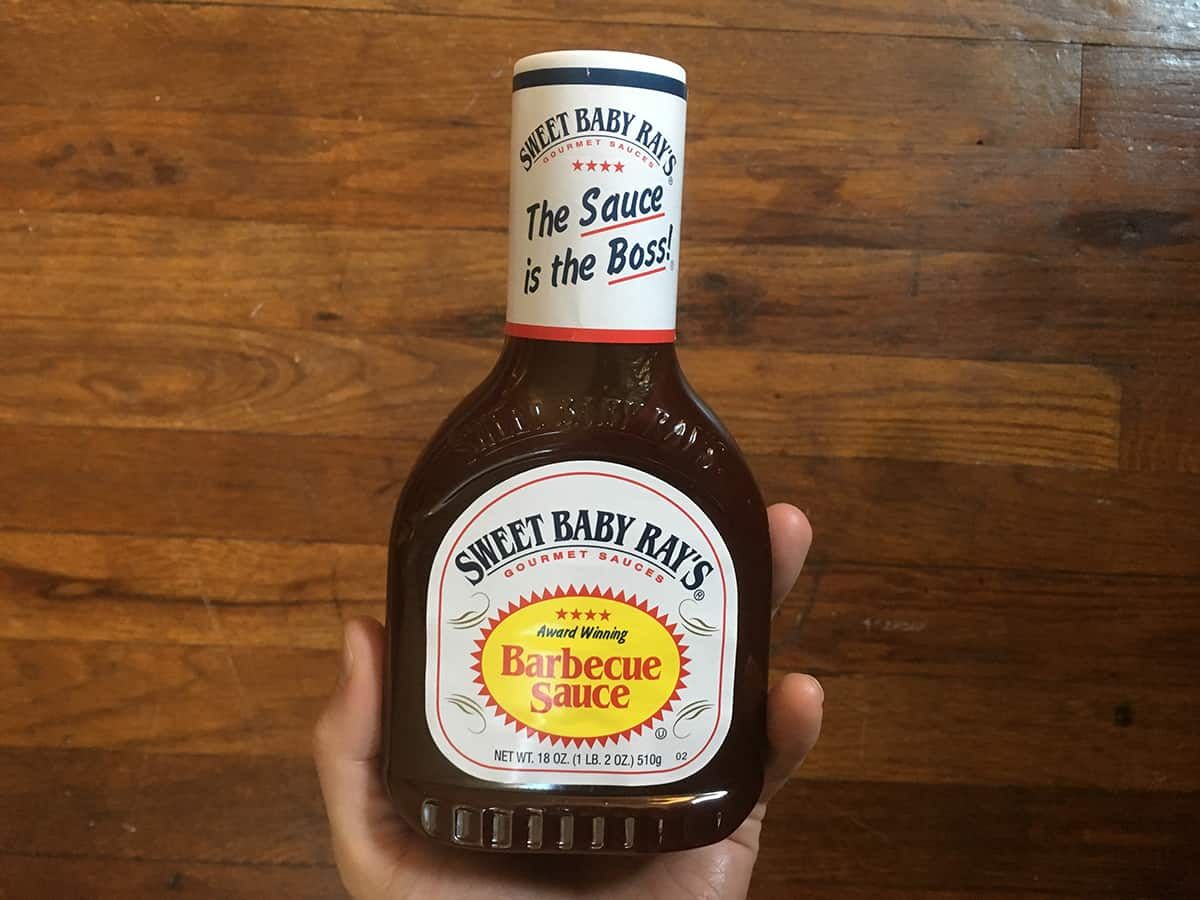 Whether you’re enjoying a vegan seitan steak or you want to spice up your beans and rice, there’s one thing that can take the flavor to the next level: BBQ sauce. But what ingredients are even in BBQ sauce?

Is BBQ sauce vegan? BBQ sauce is usually vegan. The most common animal ingredient to check for is honey. The Original flavor of Heinz, Kraft, Stubb’s, Bull’s-Eye, and Sweet Baby Ray’s barbecue sauce are all vegan. Find a full breakdown of flavors from each brand below.

Below I’ll discuss in further detail what ingredients to look out for and why some vegans disagree. I’ll also list which specific BBQ sauce flavors are vegan from each brand.

There are four potential ingredients in BBQ sauce that vegans can find problematic: honey, anchovies, processed sugar, and natural flavors. One of these is pretty obvious (anchovies), but the other three are more debated.

Of the main BBQ brands you’ll find in the store, anchovies are mainly only found in a few flavors by Heinz (listed below). But you’ll want to avoid those.

Anchovies are small fish, and even if you identify as an ostrovegan (a vegan who consumes oysters), all vegans agree that killing and eating fish is not vegan. I wrote more about why in my post “Do Vegans Eat Fish?“

Honey: The Most Controversial Vegan Ingredient

Whether honey is vegan is a debated topic in the vegan world.

Many vegans believe that honey shouldn’t be consumed. First, it’s an animal product (bees are animals). Second, bees work hard to make their honey, and so it’s a form of theft to take it. And third, many bees do get killed in the process. (Source)

However, other vegans believe it is okay to eat honey because bees may not feel pain anyway, and avoiding honey can make vegans look like crazy people.

The popular vegan physician Michael Greger, MD, once wrote an article about this in Satya. He argued that vegans should go ahead and eat honey so the movement is taken more seriously.

When it comes to honey, it’s a personal preference for each vegan to decide about. I personally still avoid it, but I respect vegans who eat it.

If you’re a vegan who doesn’t consume honey, your choices for BBQ sauces are a bit more limited. But there are still vegan BBQ sauces available either way.

Another controversial ingredient in BBQ sauce for some vegans is sugar. But personally, I wouldn’t worry about this.

The main reason why plain white sugar would ever classify as not being vegan is if it’s produced using bone char from cattle. Bone char is sometimes used to filter sugar to make it whiter.

As a vegan, the challenge with avoiding sugar that was filtered with bone char is that it’s not labeled as such on the product. When you just see “sugar” listed in the ingredients, you don’t know how it was produced

So vegans disagree about how to handle this (and other questions of “strictness,” too).

Some vegans are diligent about looking up every minor ingredient and avoiding anything that could possibly have animal origin (including sugar). Other vegans just avoid the main animal foods like meat, dairy, and eggs.

So, if you want to be a strict-er vegan, how can you know if the sugar in your BBQ sauce was made with bone char?

If you want to make sure your BBQ sauce doesn’t have bone char-filtered sugar, maybe just buy an organic BBQ sauce.

But again, I personally don’t recommend stressing about where and how the sugar in your BBQ sauce was made. Veganism isn’t about being “perfect.” It is about making a positive change.

In my opinion, vegans don’t need to worry about sugar in BBQ sauce, other than from a health perspective. (Of course, if you’re consuming too much processed sugar, that’s just not going to be healthy.)

Some vegans choose to avoid “natural flavors” because it’s not specified whether those flavors come from plants or animals. They can technically come from either.

But again, this is an issue that vegans disagree about. In practice, most vegans (including myself) are okay with eating “natural flavors.”

In fact, you can buy liquid smoke seasoning from the store. It’s vegan—try it in some of your dishes!

Next, let’s get into the different brands of barbecue sauce.

Heinz Original Barbecue Sauce and most other flavors by Heinz are vegan. However, the Kansas City Style, Memphis Style, and Texas Style BBQ sauces from Heinz are not vegan-friendly due to the inclusion of anchovies (fish).

Heinz is one of the more popular brands of BBQ sauce. It’s relatively cheap and comes jam-packed with flavor.

Here is the full list of Heinz BBQ Sauce flavors and whether they are vegan, as of December 2019:

Most flavors of Bull’s-Eye BBQ Sauce are vegan, including the Original flavor. The only non-vegan Bull’s-Eye flavors are Smokey Bacon BBQ Sauce, which includes bacon, and Tennessee Style Sweet Whiskey Glaze, which contains honey.

Bullseye is an incredibly popular option when it comes to BBQ sauces, and it’s created by Heinz. Here is the full list of Bull’s-Eye BBQ sauces and whether they are vegan, as of December 2019:

Kraft Barbecue Sauces are all considered to be vegan except for the Honey, Sweet Honey, Spicy Honey, and Mesquite Smoke options. Those options do include honey—the other flavors do not. There are no other animal products in Kraft BBQ sauces.

Here is the full list of Kraft barbecue sauce flavors and whether they are vegan, as of December 2019:

Most flavors of Stubb’s BBQ sauce are considered vegan. However, the Smokey Mesquite and Sweet Honey & Spice flavors include honey, which many vegans choose to avoid.

Here are the vegan and non-vegan flavors of Stubb’s barbecue sauce, as of December 2019:

Stubb’s is actually my personal favorite when it comes to barbeque sauce. Love the flavor!

Sweet Baby Ray’s Original Barbecue sauce is vegan. Most of the other flavors are also vegan except for the following: Maple Barbecue Sauce, the flavors with “Honey” in the name, and a few other varieties listed below.

As of December 2019, I went through the full list of flavors available on the Sweet Baby Ray’s website to confirm which options are vegan. Here’s the breakdown:

I personally buy Sweet Baby Ray’s Original quite often because I have some family members who prefer it over Stubbs (which is my personal favorite).

How to Choose the Right Vegan BBQ Sauce

When you decide to head out to the grocery in search of the perfect barbecue sauce, here are a few quick tips and tricks to ensure you buy the one that’s right for you:

If none of these store-bought options satisfy you, you can also make your own homemade vegan barbecue sauce.

Here’s a good recipe from Dinner at the Zoo. I like this one because it uses wholesome, natural ingredients and isn’t overly sweet:

It’s a lot easier to make your own BBQ sauce than you might think, and this way, you can be one hundred percent sure that your product is made with strictly vegan (and healthier) ingredients.