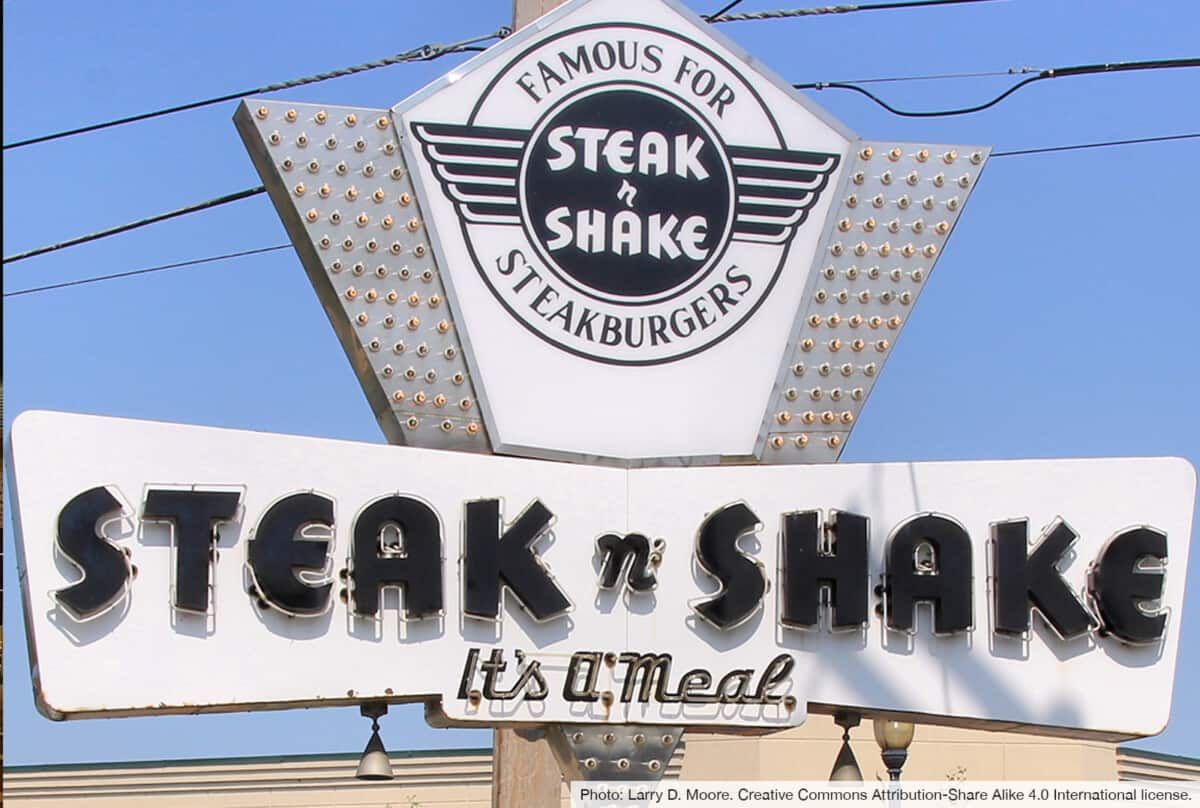 Steak ‘N Shake’s menu doesn’t cater much to vegans—it’s full of meat and milkshakes. But there are actually more vegan sides than at many other chain restaurants, if you know what you’re looking for.

Keep reading for more detail on exactly how to order these items vegan. I also share some creative ideas for how you can even put together a vegan dessert at Steak ‘N Shake. And lastly, I share my tips on how to eat whole-food plant-based (WFPB) at this restaurant.

The Steak ‘N Shake website contains full ingredients lists, so I was able to put together a pretty comprehensive guide below. However, keep in mind that each location may differ, and all menu options are not always available.

1. Salad (No Cheese or Croutons)

This is a pretty cool option, but it takes some special-ordering. In fact, you may not see “Veggie Melt” on all versions of the Steak ‘N Shake menu.

Essentially, what you’re getting is a portobello burger or sandwich. If you’ve never tried a portobello mushroom to replace meat, it’s actually pretty good. Make sure you’re not getting any meat or cheese in your melt.

The rye bread and sourdough bread are both vegan, so either of those could be used.

You can get two different kinds of vegan french fries at Steak ‘N Shake:

They should be able to get you hash brown patties or shredded hash browns if you ask. They offer breakfast meals that include hash browns as a component. Their allergen menu confirms that these hash browns are vegan on their own.

The Steak ‘n Shake breakfast menu contains a bagel sandwich. Usually they put meat, egg, cheese in it. But the bagel itself should be vegan, so you can ask to get just the bagel with some jam and peanut butter or other spreads/dips (see below).

You might want to double-check this one, but the baked beans should be vegan. The Steak ‘N Shake website says it contains no allergens. My only concern is the “Worcestershire Sauce Concentrate” as the last ingredient, which sometimes contains anchovies as an ingredient.

Steak ‘N Shake will usually have oyster crackers, saltine crackers, or both. Both are vegan. This is a pretty unique aspect of their menu, kind of cool.

Sometimes you will see apple slices as a side option at Steak ‘N Shake. You should be able to get some peanut butter to go with it, too, if you want.

Steak ‘N Shake typically has applesauce on the kids menu. According to their website, the applesauce contains added corn syrup—so it’s not as healthy as the unsweetened varieties.

The kids menu at Steak ‘n Shake usually includes a banana. If you want to eat like a fruitarian, you can just ask for like 10 bananas!

Here are some fo the veggie toppings you can get added to various meals:

Note: The Garlic Spread, Frisco Sauce, and Chipotle Sauce are not vegan—they all contain egg.

It would take some creativity to put together a true vegan dessert at Steak ‘n Shake. But it could be done if your server is willing to entertain your requests. If you brought your own vegan ice cream, you could really go hog wild.

Here are some vegan dessert components they should have lying around:

Maybe you could even incorporate a bagel into this somehow. Dipping a bagel in peanut butter and chopped up Oreos? Sounds good to me, but maybe I’m a strange fellow.

There may be alcoholic drinks served, too, depending on your location. If you want to check whether drinks are vegan, I always recommend searching on Barnivore.

Steak n Shake Onion Rings are not vegan. The contain milk in the form of whey.

Is the Flour Tortilla at Steak ‘N Shake Vegan?

The flour tortilla at Steak ‘N Shake is not vegan or vegetarian. It contains whey and beef fat.

What Bread and Buns Are Vegan at Steak n Shake?

These are your vegan options for bread and buns:

Note: The Wheat Bread is not vegan due to honey and a small amount of butter in the recipe.

What if you’re a vegan for health reasons, and you don’t want to eat any fried or processed foods? Are there whole-food plant-based (WFPB) options at Steak ‘N Shake? Any at all?

Here are the WFPB options at Steak ‘N Shake:

As usual for chain restaurants, there are not many truly unprocessed options. I would probably just ask for multiple bananas and call it good.

There’s one other idea I had for a WFPB option, if you want to get creative…

The “Genuine Chili” at Steak ‘n Shake is not vegan—it contains beef. However, the allergen menu on their website also lists the ingredients for the “Chili Beans” separately, and those are vegan. (It’s mostly just kidney beans, salt garlic, and paprika.)

So, if this potential side of beans interests you, you might ask if they’re able to give you just the chili beans, not anything else from the chili.

(Again, I’m not sure if you can even get the chili beans separate, or if they only sell them as part of the pre-made chili that contains meat. But you could ask.)