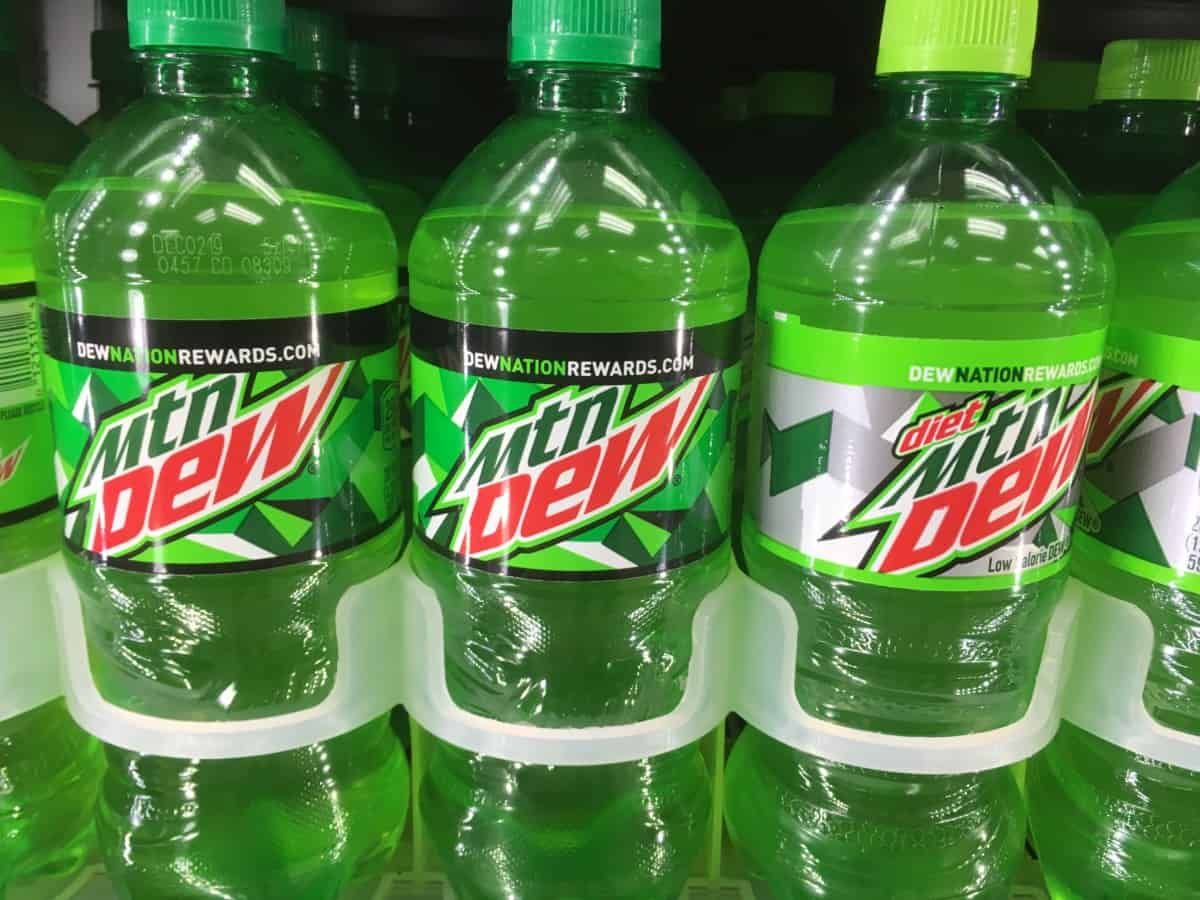 I loved Mountain Dew as a teenager. So when I went vegan 14 years ago, I was sure to check right away if I could still drink it.

So, is Mountain Dew vegan? Mountain Dew is generally considered vegan. There are no major animal ingredients in any flavor. Mountain Dew may contain sugar that was processed with bone char from animals, but most vegans don’t worry about that since it’s very difficult to track or confirm.

There are a few other issues that I’ll cover below, too, regarding animal testing and a few other possible animal byproducts found in sodas, including Mountain Dew products.

Which Ingredients in Mountain Dew Are Potentially Not Vegan?

For the most part, any Mountain Dew flavor will be vegan. It just depends on your precise definition of “vegan.” Only the strictest vegans will have a problem with some Mountain Dew ingredients.

As a vegan who is experienced at reading labels, those are the only potential problems I see. To me, they are not real problems. Don’t worry about it.

Drink Mountain Dew if you want to. It’s not healthy, but it’s vegan in my book. And most vegans would agree with me.

Diet Mountain Dew is generally considered vegan. It contains no animal ingredients. The yellow coloring was likely tested on animals at some point in its development. But most vegans do not boycott the soft drink over this. Vegans can drink Diet Mountain Dew.

Mountain Dew Kickstart is generally considered vegan. Some flavors include minor ingredients that may be sourced from animals, such as glycerol ester of wood rosin and sugar (may be refined with bone char). Most vegans do not boycott the drink for this. Vegans can drink Mountain Dew Kickstart.

For more on these “gray area” ingredients, see the longer description above. Some of the more strict vegans may not want to consume them. Most practical vegans are okay with them.

Two More Non-Vegan Ingredients You May See in Sodas

To my knowledge, neither of these ingredients show up in Mountain Dew products, but just be aware that they can show up in sodas, so it always makes sense to scan the ingredients.

Vitamin D3 – Most manufacturers develop their vitamin D3 from sheep’s wool (also known as lanolin). While rare, you do find this in some sports and energy drinks. (But again, this is a minor ingredient that many vegans would shrug off anyway.)

Honey – While rare, some specialty sodas have honey as their main flavoring ingredient. (Some vegans are okay with consuming honey, but many are not.)

Why I Don’t Obsess Over Minor Ingredients

You can find very long lists of animal byproduct ingredients online. I remember I downloaded a 21-page list when I first went vegan 12 years ago.

Over the years, I came to the opinion that it really isn’t necessary for me to strictly avoid every single ingredient that may possibly be sourced from an animal.

The fact is that the first 90 to 99% of your vegan effort—excluding the main animal foods like meat, dairy, and eggs—that matters so, so much more than your final 1% of effort excluding all these tiny animal byproducts.

Instead of obsessing over the last 1% and trying to have personal purity, just go talk to one of your friends about veganism. See if you can convince one other person on earth to eat vegan, too, or at least try some vegan foods with you.

If you convince even one person to go vegetarian or start eating less meat, then you’ve already had way more impact by recruiting another person to give their first 90% rather than obsessing over getting your full complete 100% vegan purity.

Don’t obsess over vegan purity. Just be a vegan in the most simple way and then talk to other people about it sometimes to see if you can help spread the word. That matters a lot more than obsessing over little ingredients.

How Do I Know If Any Specific Mountain Dew Flavor is Vegan?

The quickest way to check if a specific Mountain Dew flavor is vegan is to scan the ingredients list. This may seem like an intimidating task at first, but you will get much faster if you try doing it.

Check out this article I wrote all about how to check if any food product is vegan. It’s a skill-set you should learn if you want to be vegan for the long-term! You don’t want to have to rely on what other people say is vegan.

Strive to learn to check for yourself whether things are vegan. Then you can decide for yourself how strict you want to be about the various byproduct ingredients I’ve been mentioning in this article.

Here is the authoritative site to check online for Mountain Dew ingredients. You can read the nutrition facts for all the different varieties and flavors.

If you want a more authoritative answer, you can always call or email the soda company and ask where they source their specific ingredients from. But sometimes they will not even give you conclusive answers, and you’ll still have to decide for yourself what you’re comfortable with.

Which juices are vegan?

Most fruit and vegetable juices are vegan. However, there are a few surprising ones that include animal ingredients. Tropicana’s Heart Healthy Omega-3 Orange Juice has fish oil and gelatin. Minute Maid’s Ruby Red Grapefruit Juice uses a cochineal-based dye for its red color.

Many beers, wines, and liquors are vegan—but not all. Barefoot Wine, for example, uses gelatin and animal proteins in the fermentation process. Some wineries use milk and eggs in the wine-making process, as well. Use Barnivore to check which alcoholic drinks are vegan.

Most root beer is vegan. Their principle ingredients are all vegan, including the many roots and herbs that give the beverage its name. As with any other soda, there are still possible problematic ingredients in sugar filtered with bone char, some food colorings, and honey as a sweetener.