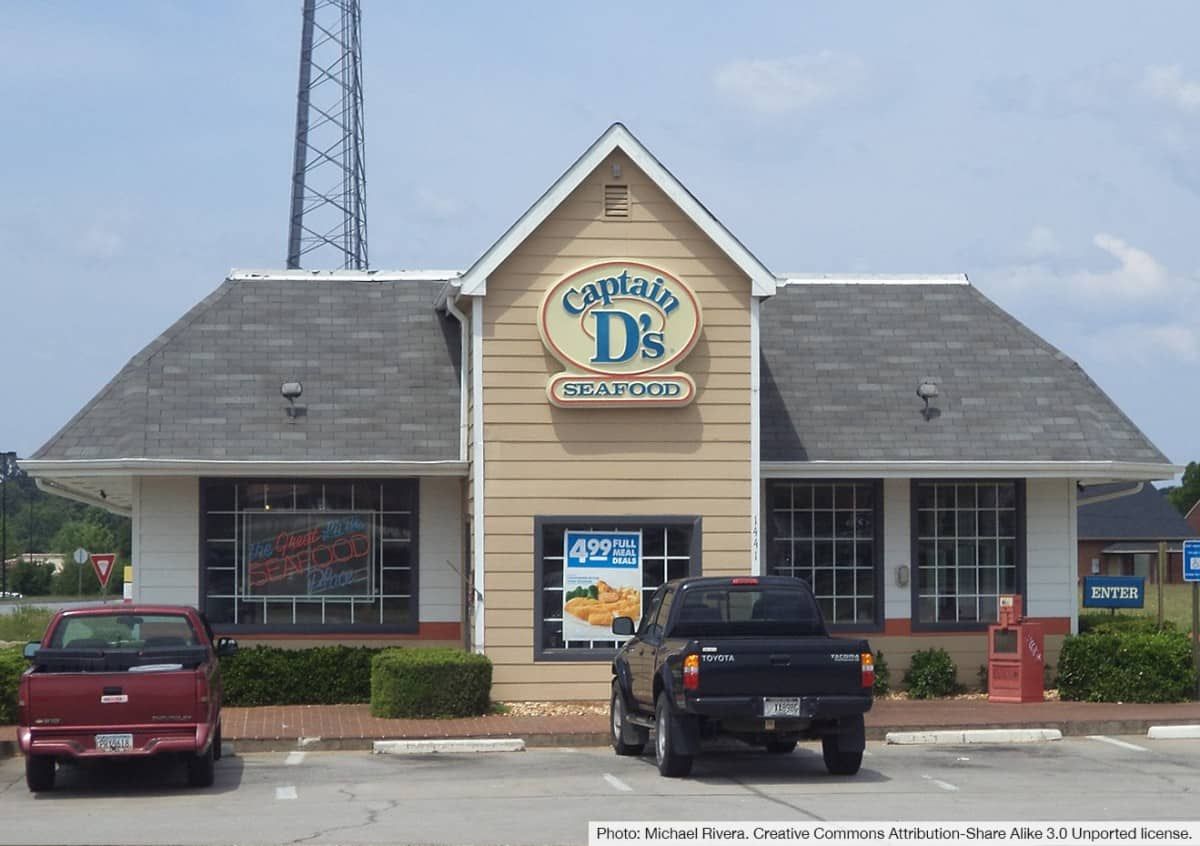 Captain D’s is not the best for vegans…. In fact, when it comes to seafood restaurants, Red Lobster is quite a bit better for us. That said, you can still find some vegan sides at Captain D’s.

Below, I’ll share more about how to order these vegan. I’ll also some menu items that are surprisingly NOT vegan. And I’ll answer common questions about Captain D’s cooking oil, fries, breadsticks, okra, hush puppies, and more!

The following vegan menu was compiled with the help of the menu and nutrition and allergen information on the Captain D’s website. I also consulted Business Insider when it comes to the cooking oil issue.

I love restaurants that offer a plain baked potato. Sure, it’s a little bland. But it’s actually a healthy, whole food. You can ask for some ketchup, barbecue sauce, or see what else they have to spice it up.

You need to ask for “no butter” and “no sour cream.” Even the normal “Baked Potato” comes standard with these toppings, so be sure to exclude them.

This is just steamed broccoli florets. They appear to come dairy-free in their standard preparation. But I’d still specify “No Butter” to make sure they don’t add any at your location.

This is just steamed corn on the cob. It’s just a side, so not a huge serving or anything. Be sure to specify that you don’t want any butter.

According to the allergen menu, the Side Salad doesn’t include any dairy. But just to be safe, you may want to specify “No Cheese” and “No Croutons.” (Croutons usually contain dairy.)

It looks like there’s only one vegan salad dressing:

According to Captain D’s allergen menu, their smoothies do not contain dairy. You still may want to double-check this at your specific location. As I’ll share below with the cooking oil, Captain D’s seems to be a bit inconsistent from location to location.

Here are the 3 smoothie flavors you’re likely to see offered:

You’ve also got the standard selection of Pepsi products and teas:

You may assume that some of the following items would be vegan, too—but unfortunately they’re not:

What Cooking Oil Does Captain D’s Use?

What does this mean for vegans? Well, you have two options:

I struggled to find good information on Captain D’s breadsticks.

Captain D’s allergen menu says their breadsticks do not contain dairy, egg, or any other animal-based allergen. However, the nutritional information lists their cholesterol content as 2 mg. Dietary cholesterol is only found in animal fat. So vegan products should always have 0 mg.

This makes me believe that the breadsticks actually do contain dairy or some other animal product. The vegan status of Captain D’s Breadsticks may vary by location.

If you’re interested in Captain D’s breadsticks, I would ask if they’re vegan at your location.

Captain D’s Hush Puppies are not vegan, as they contain milk and egg. They are likely also fried in beef tallow (at some locations, at least). As mentioned above, at least some Captain D locations have been found to use beef tallow in their fryers.

Captain D’s Okra is not vegan, as it contains milk and egg. It is likely also fried in beef tallow (at some locations, at least). As mentioned above, at least some Captain D locations have been found to use beef tallow in their fryers.

What if you’re not just vegan but also trying to avoid processed foods? Can you get a whole-food plant-based (WFPB) meal at Captain D’s? Actually, yes!

As you can see, most of the vegan options at Captain D’s are also WFPB options.

Restaurants with baked potatoes make it a lot easier to actually fill up as a health-minded vegan. And the multiple vegetable sides at Captain D’s also helps us fill out the meal a bit, too.

If you want your salad to be strictly WFPB, then you’ll probably want to skip the dressing, as I’m guessing the dressing contains a bit of sugar.

I’ve created vegan guides to nearly 100 chain restaurants. Here are a few more you may want to check out: