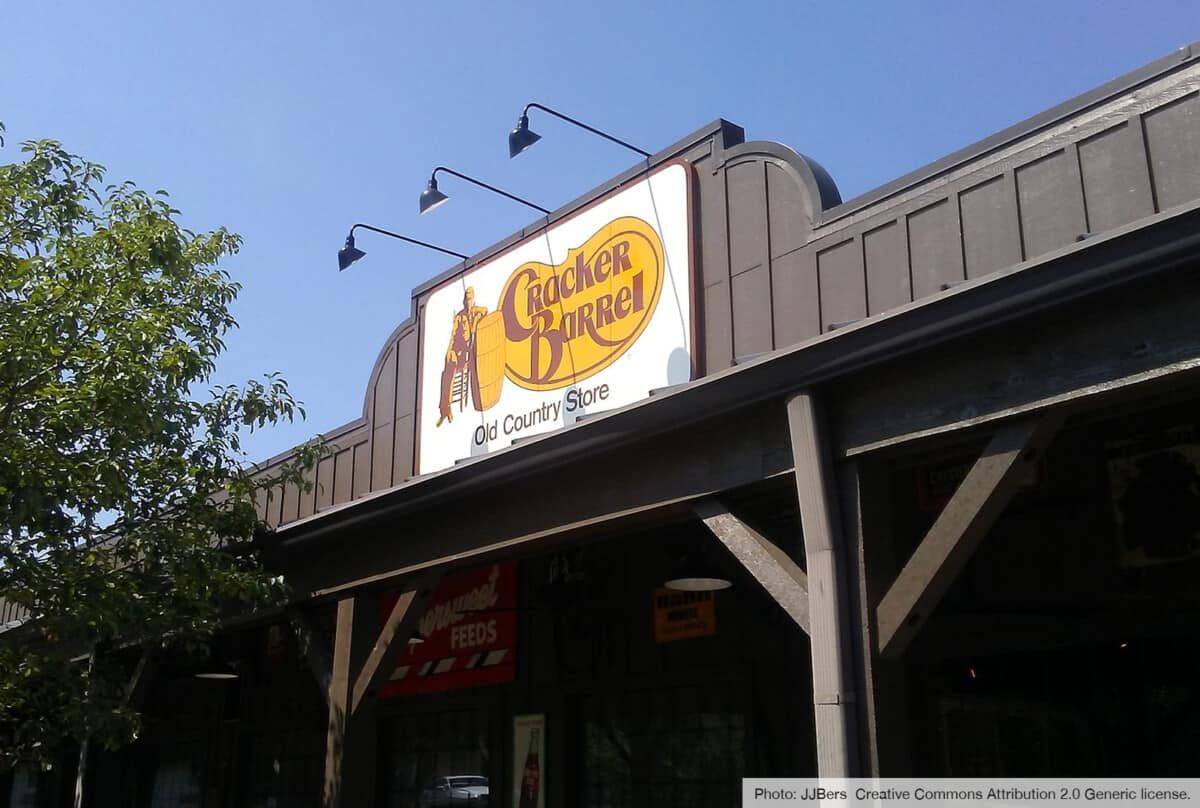 Ah yes, Cracker Barrel, the #1 restaurant I love attending as a vegan… Kidding. Cracker Barrel is pretty slim as far as a vegan menu. What’s worse, it can be hard to even figure out what’s vegan when you visit. Well, here’s my best attempt to help you with that.

Below, I’ll also share a bunch more options that might be vegan, too. And I’ll address some common questions, like “Are the hash browns at Cracker Barrel vegan?”

This was not an easy vegan menu to put together. Cracker Barrel didn’t respond to my email asking about their vegan options. So I mainly used the allergen information and nutrition facts on their website to make this list. But they don’t share full ingredients lists.

I included a list of options I feel most confident about declaring “vegan,” along with an additional list that “Might Be Vegan.” My hope is that some of those latter options can at least be special-ordered vegan, too. I hope to update this post with more detailed info later.

Let’s start with the list of solidly vegan options!

Cracker Barrel actually has quite a few vegetable sides—but this is the only one I feel confident saying is vegan. And even with this one, I’d ask to make sure they don’t add butter or lard.

All the vegetable sides are marked as dairy-free on Cracker Barrel’s site. But many of the vegetable sides—the green beans, carrots, corn, and beans—show a small amount of cholesterol in the nutrition facts. This makes me think they do contain some lard.

The fresh steamed broccoli shows 0mg of dietary cholesterol, however. And the fact that it’s steamed also suggests animal fat would not be needed during cooking. So I’m thinking you should definitely be able to order this one vegan.

Cracker Barrel offers baked potatoes and sweet potatoes, which can be ordered plain. This is a healthy and filling option. (Potatoes are the most satiating food in the world.)

So again, ask for it without butter, sour cream, or lard to make sure it’s fully vegan.

You should be able to get some jam or peanut butter to spread on the toast or English muffin. You could always bring your own vegan butter if you’re planning ahead for it.

And there’s another fruit side, too, which looks good as far as I can tell:

Like most restaurants, Cracker Barrel offers some a “Mixed Greens Side Salad,” which should be easy to get vegan. Their website doesn’t include a lot of info on this salad, but the website lists it as dairy-free and with 0mg cholesterol. So it looks vegan.

Typically, side salads need to be special-ordered without cheese or croutons to make sure they are vegan. So keep your wits about you.

6. Grits and Oatmeal (If Made With Water)

The allergen menu says that Cracker Barrel’s grits are dairy-free. You may still want to ask about lard, but I’m guessing the grits are vegan.

The allergen menu says the oatmeal contains milk. That said, multiple other guides to eating vegan at Cracker Barrel recommend the oatmeal. So you may be able to request the oatmeal to be made with water, or it may vary by location how they make it. Just check.

The following syrups, dressings, and sauces may help you adapt some of the meals to be vegan. They may have additional options for some of these, too.

You may also be able to order these “sweet toppings” vegan: Country Peach, Sweet Blackberry, and Cinnamon Spiced Apple. But they usually come with a whipped topping that contains dairy. So be sure to ask for only the fruit, no whipped topping.

Here are some of the vegan beverages you’ll typically find at Cracker Barrel:

As I said, it was difficult to find reliable sources on the ingredients in Cracker Barrel dishes.

These are some more options that I thought were vegan for a while, but now I’m not sure. I’d ask about these in person if you want to know more.

The steam broccoli above seemed like the safest vegetable side. But you may be able to get the following veggie sides mades vegan, too. It’s worth asking.

If you can be made vegan, then you’ll likely want to get the Country Vegetable Plate. This will allow you to order several of these vegetable sides together:

The allergen menu says these are all dairy-free. But the nutritional information lists a bit of cholesterol in each of them. So ask about any added animal fat or cooking in beef broth, chicken broth, anything like that.

Fries are typically one of the go-to vegan options at chain restaurants. (Most fries are vegan.) And Cracker Barrel offers some nice, thick steak fries. The allergen menu specifies that these are fried in soybean oil. So I wouldn’t think lard would be an issue.

That said, I was surprised to see that the steak fries contain a small amount of cholesterol according to the nutrition facts. This makes me think maybe they do contain some animal fat after all. I would ask in person.

Another fried vegetable—this option is a little more novel than just steak fries!

The allergen menu says these are dairy-free and egg-free—so I’d think the batter should be fine. It also specifies that they’re fried in soybean oil. So lard shouldn’t be an issue, either, right?

But as with the steak fries, I was surprised to see that these contain a small amount of cholesterol according to the nutrition facts. This makes me think maybe they do contain some animal fat or meat broth after all. I would ask in person.

A bowl of beans! I’ve never seen a bowl of beans on a chain restaurant’s menu before. That’s pretty cool. Beans are great for fiber, protein, and many other nutrients. But are they fully vegan?

The allergen menu says they’re dairy-free. But they do contain a small amount of cholesterol according to the nutrition facts. This makes me think they may contain animal fat or meat broth. I would ask in person.

“Side of the Day” Options?

Cracker Barrel has some sides that are only available on specific days. Judging from the allergen menu, these two looked to be vegan or close to it:

But again, these both contain a small amount of cholesterol according to the nutrition facts. So they may contain some animal fat or meat broth in some form. I would ask.

These are some menu items you might assume would be vegan, too, but the allergy menu shows that they’re not vegan:

The Hashbrown Casserole at Cracker Barrel is not vegan. The allergen menu specifies that it contains milk, likely in the form of butter.

I don’t see any other hash brown option on the menu, but if they exist, they may contain butter, too. So be sure to ask about any dairy.

When making my vegan guides to chain restaurants, I like to include a section on the whole-food plant-based options. In case you want to avoid processed food while eating out, too!

These should be solidly WFPB options at Cracker Barrel:

And then, if the following options are in fact fully vegan, they could be added, too—but again, I’m not sure, so ask:

Some more relaxed WFPB dieters may also feel comfortable going for the multigrain toast. It’s not fully whole-grain, but partially.