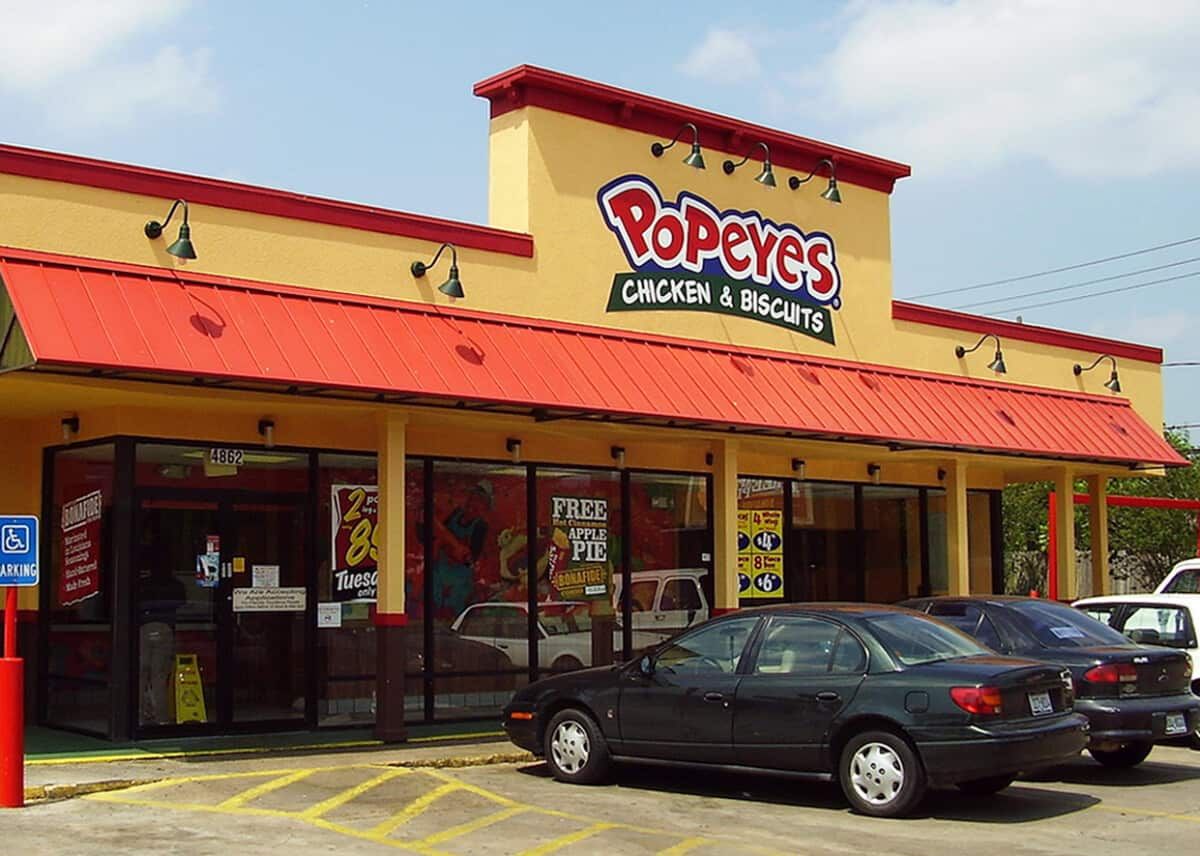 Popeyes makes some real comfy food… but unfortunately, most of it is made of dead animals. It’s not a very vegan-friendly place! That said, there are still some enjoyable options if you find yourself going there.

Below, I’ll answer some common questions about other Popeyes menu items, too, like the biscuits, fries, hashbrowns, and mashed potatoes. Then, I’ll end with a whole-food plant-based menu for Popeyes—in case you’re trying to avoid processed food, too!

The following Popeyes vegan menu was assembled mainly using the Nutritional Information and Allergen Information on the Popeyes website. I also emailed the company to confirm some details, although I did not hear back.

Ya gotta love a good baguette. Simple, but filling and delicious. It’s good we at least have this, since the biscuits aren’t vegan (they contain milk).

2. Corn on the Cob (Without Butter)

Corn-on-the-cob is a classic comfort food and one of the more fun meals you can eat. Just make sure to ask for it without butter.

The grits is typically made vegan (with water), but I would check about these, as well. Make sure they aren’t made with butter, milk, or animal fat at your Popeyes location.

Another simple, comfy side that is vegan-friendly.

These are literally just jalapeño peppers in a little cup on the side. No animal products whatsoever.

The following foods at Popeyes are not vegan, even though you might think they would be:

But that’s not all…

For the following foods, I believe there is animal fat in the preparation, too… as Popeyes Nutrition Information says they contain cholesterol (which only comes from animal fat), but no animal-based allergens are marked:

Now let’s answer some questions, just to make sure everything is clear.

Popeyes’ fries are not vegan. On the Popeyes website, it says they contain cholesterol, which only comes from animal fat. Elsewhere online, it is reported that the Cajun Fries are fried in pig lard.

Popeyes’ Biscuits are not vegan, as they contain milk ingredients.

Does Popeyes Fry in Lard?

Based on the information I could find, Popeyes seems to cook with various kinds of animal fats, likely including lard. This is not unlike other Southern-style restaurants—Texas Roadhouse and Cracker Barrel also add animal fat to many of their otherwise vegan dishes.

Specifically, the Cajun Fries, Cajun Rice, and Red Beans and Rice appear to have some kind of animal fat mixed in, as explained above.

What if you also want to avoid processed foods at Popeyes, not just avoiding the animal products? What are the whole-food plant based (WFPB) options available to you?

Unfortunately, Popeyes doesn’t list all its ingredients online, and they didn’t respond to my email, so I don’t have 100% confirmed information on this.

As long as you can get the Corn on the Cob without butter, it should be WFPB, as there won’t be any other processed ingredients or animal ingredients added. And of course, you can get your cup of jalapeño peppers on the side!

As far as the Grits, they may be WFPB, but you would want to ask to confirm there isn’t any butter, milk, or oil being used at your location.

The Applesauce may also be WFPB (if it’s unsweetened), or it may contain added sugar. But again, you’d have to ask.