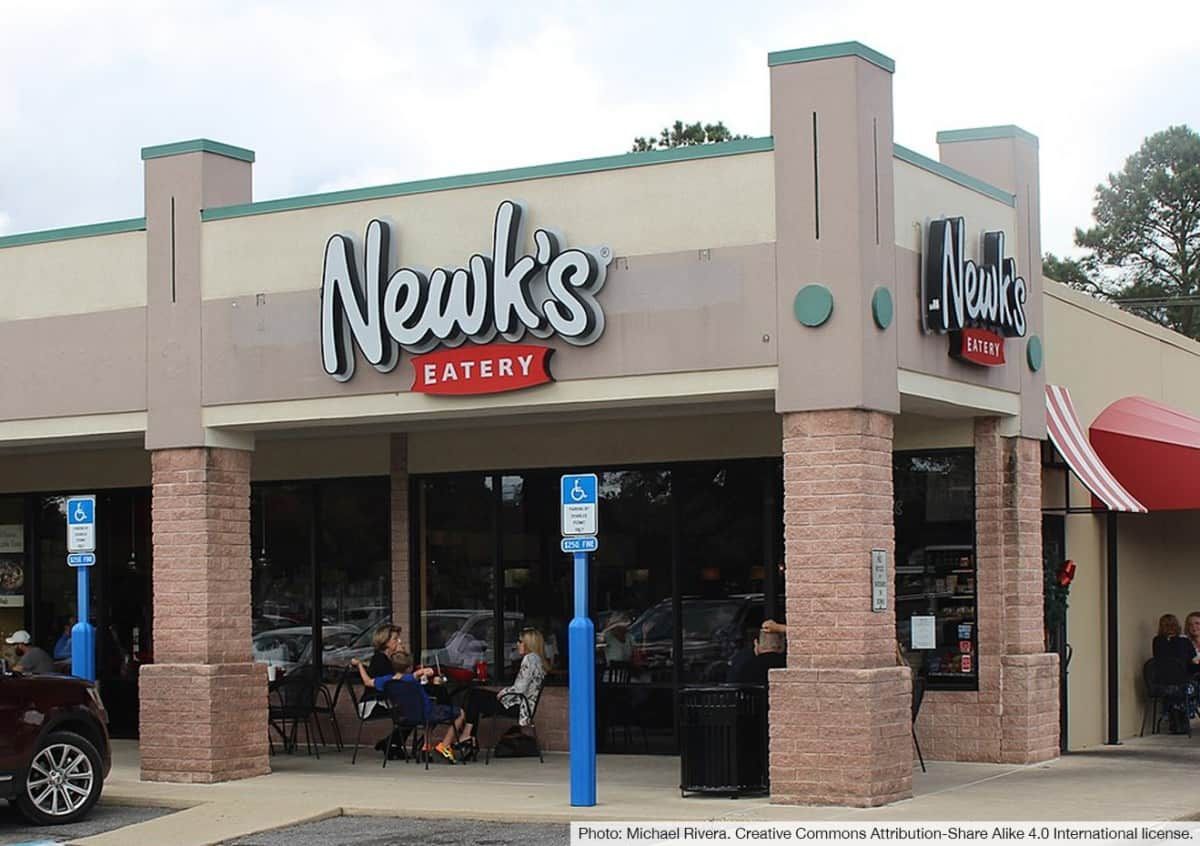 Newk’s doesn’t have a lot of fully vegan options that come standard on their menu. But with custom ordering, you can actually get quite a lot here. And as a vegan with 14 years of dining experience, I’m happy to be your guide.

Below, I’ll share more about how to order these items vegan, along with some menu items that are surprisingly NOT vegan. I’ll answer some common questions, and I’ll end with a look at whole-food plant-based options, too!

The following vegan menu was compiled with the help of the menu, allergen information, and online ordering features on the Newk’s website.

1. Veggie Club (No Cheese or Pesto)

You can get a veggie club sandwich at Newk’s, but it takes a bit of customization. You want to ask for “No Goat Cheese” and “No Pesto.” That should make it dairy-free and vegan.

If you want other customizations, they should have artichokes, red onions, olives, tomatoes, and Pepperoncini on hand, too (for the pizzas). So you could probably get those added.

2. Create Your Own Vegan Pizza

Newk’s doesn’t have a pre-made vegan pizza. But you can choose the “Create Your Own Pizza” option, and then ask for a pizza without cheese.

The “garlic oil,” tomato sauce, and crust are all dairy-free based on what I’ve heard, although you can always double-check with staff at your location to make sure.

Choose up to 3 veggie toppings:

You could also customize the “Veggie Pizza” to make it vegan. However, you’d need to remove three ingredients: Goat cheese, mozzarella cheese, and basil pesto. (I’m assuming that the pesto is not vegan, as only ~1/3 of pesto recipes are vegan.)

As with pizza above, there is no pre-made vegan salad at Newk’s. But again, you can customize. This opens up several salad options, with a surprising array of vegan dressings (below).

Here are four salads that are easy to vegan-ize:

Note: The Lemon Basil Vinaigrette is not vegan, as it contains egg.

The kids menu is called the “Little Newk’s” menu. It’s not very vegan-friendly overall, but they do have apple sauce and fruit for the kiddies.

Looking at the Newk’s menu, you may see multiple fruit sides. The “fresh fruit” option is listed as 45 calories, and the fruit bowl is 140 calories—so I guess you get more with the Bowl. But either one will likely vary based on the location and season.

The exact selection of chips will vary, but you’ll typically see:

Does Newk’s Have Any Vegan Desserts?

Newk’s bread appears to be vegan. According to the allergen menu on the Newk’s website, both their French Parisian Bread and their 11-Grain Parisian Bread are free of eggs and dairy.

I’ve reviewed a lot of bread ingredients in my 13 years as a vegan, and I can tell you that the only other ingredients you might see in bread beyond dairy would be honey. But that’s only common in whole-wheat bread—not white Parisian bread.

So I would consider Newk’s bread safely vegan.

Does Newk’s Have Vegan Cheese?

Currently, Newk’s does not have vegan cheese for their pizzas or sandwiches. However, you can order pretty much any menu item without cheese.

Newk’s Tomato Basil Soup is vegetarian but not vegan. It contains dairy in the form of a goat cheese garnish, croutons, and possibly in the soup itself.

What if you’re not just vegan, but you’re also trying to avoid processed foods? Can you get a whole-food plant-based (WFPB) meal at Newk’s Eatery? That means no refined sugar, flour, or oil. Let’s take a look.

Why nothing else? The pizza crust and sandwich bread are not WFPB due to flour and refined oil. Chips are obviously not WFPB, due to the oil. And most (if not all) of the salad dressings will contain sugar or oil.

So if you’re strictly WFPB, it’s just those basic salad and fruit options. That said, it’s better than some other chain restaurants where literally the only vegan options are fried potatoes, so there’s nothing WFPB!