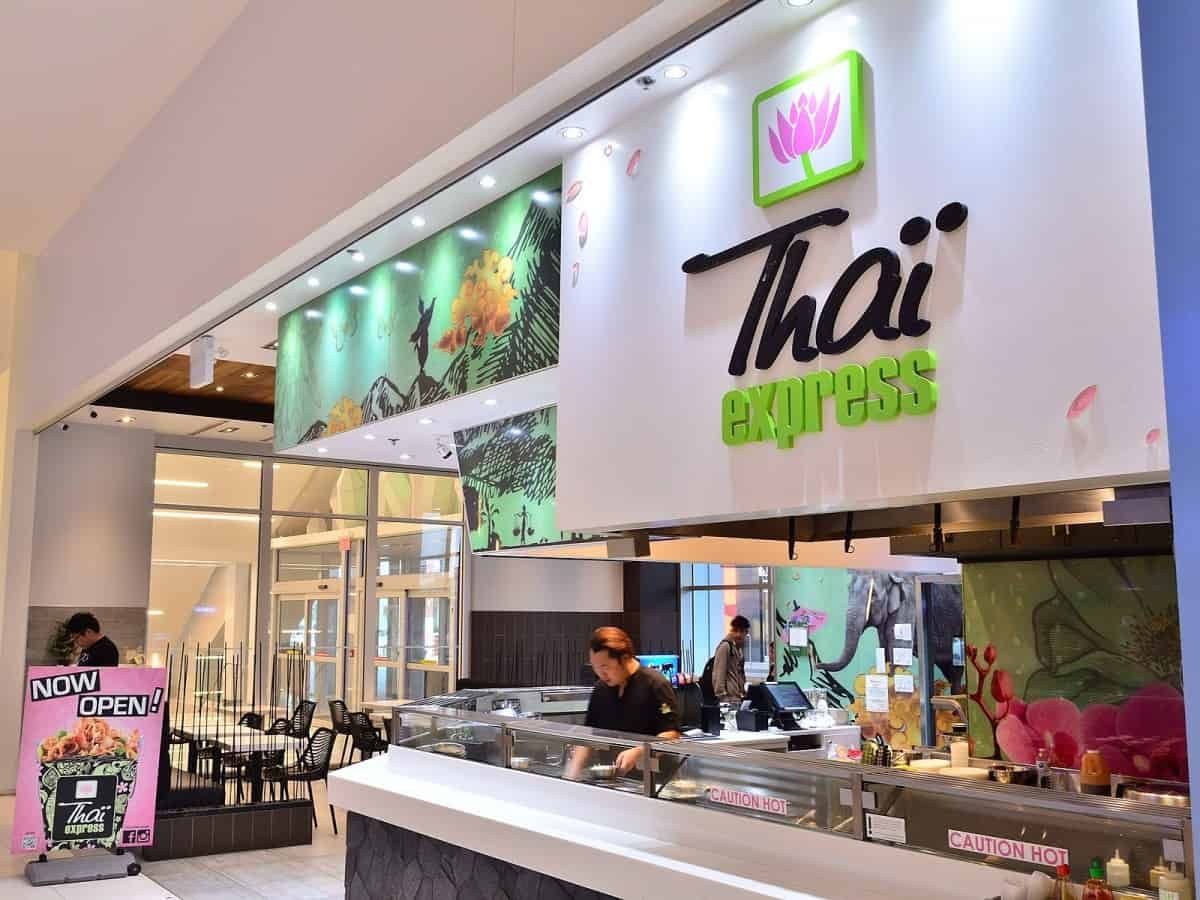 Thai Express is more vegan-friendly than your average chain restaurant. In fact, they have a sort of “vegan menu” on their website. But honestly, it’s a bit confusing. So today, I’m using my 13 years of vegan dining experience to help you figure it out!

The items with an asterisk (*) are not officially confirmed vegan. I’ll explain more about that below. I’ll also share more tips on how to order these items vegan, and some other menu items that are surprisingly not vegan. I’ll answer some common questions about the tofu and peanut sauce, too!

The following vegan menu was compiled with the help of the menu, nutrition information, and vegan and gluten-free guides on the Thai Express website.

Restaurant menus change and often vary by location. I recommend double checking any important information with staff at your Thai Express location!

You can choose between:

This is, like, a stir-fried salad? Honestly it confuses me a bit—but it sounds (and looks) amazing. The veggies include carrots, bell pepper, onions, and lettuce, topped with coriander (cilantro) and mint.

You’ve got a number of vegan flavors to choose from:

Note that the “Peanut” and “Chilli Paste” options are NOT vegan.

Also: The eggplant is cooked in the same oil as the meat. So if that cross-contact bothers you, then don’t choose the eggplant option!

If you want to make it healthier, you can also ask for less noodles and more bean sprouts.

If you want to make it healthier, you can also ask for “less oil.”

5 More Items That May Be Vegan

Based on my 13 years of vegan dining experience and everything I can find on the Thai Express website, I would guess the following items are also vegan. There are no animal products listed for any of them:

However, I can’t confirm these items yet. I just sent Thai Express an email to hopefully confirm the vegan status of more of their appetizers. If I hear back, I’ll update this post.

In the mean time, you may want to just ask your server at Thai Express. Pay extra attention to the sauces and dressings. It’s possible that the peanut dipping sauce for the spring rolls is not vegan, for example.

There is apparently no way to order the following dishes vegan at Thai Express:

In addition, Thai Express has made clear that just selecting “Vegetables” or “Tofu” for the protein option does not make a dish vegan! There are non-vegan sauces they use in several dishes.

So be sure to check with them about whether your order will actually be vegan. Overall, they are one of the more vegan-friendly restaurants out there. They should be able to help you confirm that your order is vegan.

Thai Express Tofu is generally considered vegan. It is not officially listed as vegan because it is cooked in a shared fryer with meat. But in practice, most vegans are okay with eating tofu prepared in this manner.

However, you should also be aware that choosing the “Tofu” option for a dish does not ensure that it will be vegan.

On the Thai Express website, they make it clear that just ordering “Vegetables” or “Tofu” for the protein option for a dish does not make it vegan. Choose the “Vegan Option” instead. If there is no vegan option, that likely means the sauce, broth, or other component isn’t vegan.

Thai Express Curry is not vegan, and it cannot be ordered vegan. This is stated clearly on the Thai Express website.

Thai Express Pad Thai can be ordered vegan—just ask for the Vegan Option. If you don’t specify that you want the vegan option, then it would potentially contain egg and a non-vegan sauce.

Thai Express Pad Thai is gluten-free as long as you don’t include tofu, as it has rice noodles. However, the tofu at Thai Express has been in contact with gluten. Personally, I would just specify to your server that you want it gluten-free to make sure they understand what you want.

Thai Express Peanut Sauce does not appear to be vegan. I was not able to get the full ingredients list. But I noticed that the Peanut flavor of the Pad Salad (which contains peanut sauce) is not vegan, while most other flavors are. So it’s likely the peanut sauce that is not vegan.

Thai Express Spring Rolls appear to be vegan. However, I would ask about the dipping sauce. There is reason to believe that the peanut sauce and other sauces at Thai Express are not vegan.

I just sent Thai Express an email to see if I can confirm the vegan status of more of their appetizers. If I hear back, I’ll update this post. In the end, I would be surprised if you couldn’t get the Spring Rolls vegan.

Does Thai Express Use Fish Sauce?

Unfortunately, you cannot order their curry vegan. I suspect this is because they use fish sauce in their curry recipe, although I wasn’t able to get the specific ingredients to confirm that.

What if you’re not just vegan but also trying to avoid processed foods? Can you get a whole-food plant-based (WFPB) meal at Thai Express?

Well, most people wouldn’t count rice noodles as WFPB—and most of the sauces at Thai Express probably contain sugar or oil. So most of the dishes would be disqualified for one or both of those reasons.

That said, you could probably get a WFPB salad at Thai Express. Just be careful with the dressing. I’m not sure which of their dressings contain sugar or oil since they don’t have the full ingredients listed anywhere.

Check out some of my other guides to the vegan options at Asian chain restaurants: