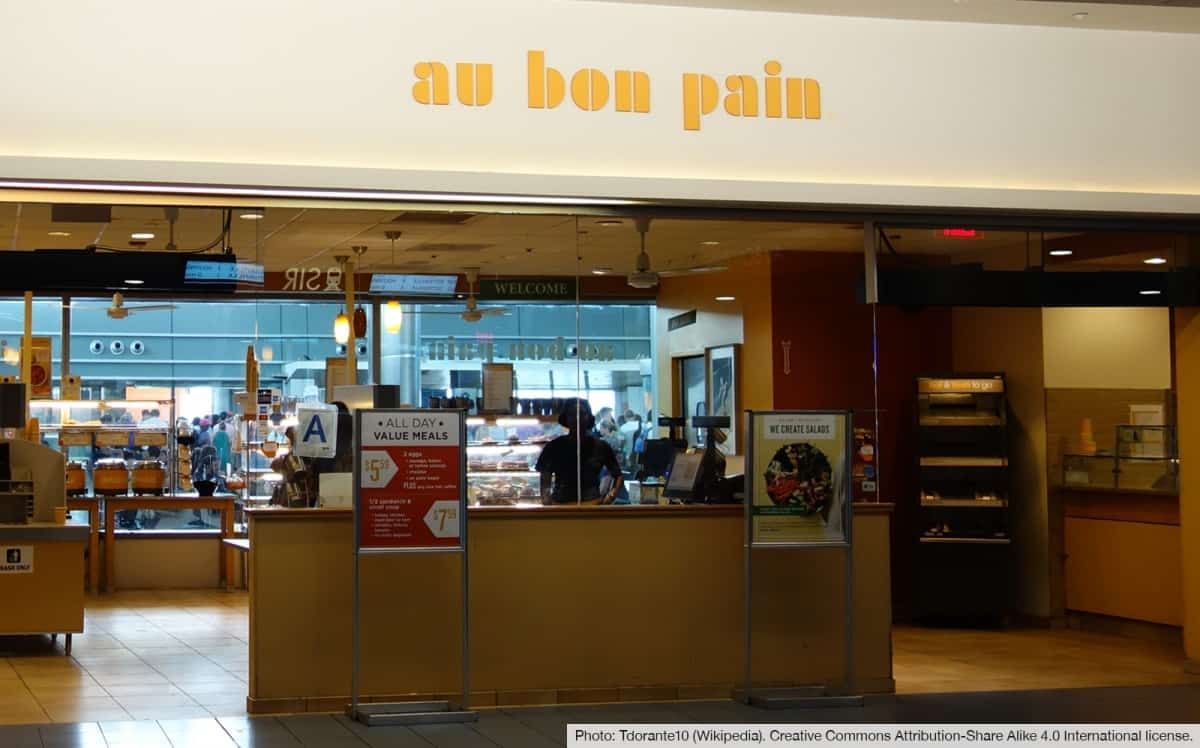 For a cafe often located in places like malls and airports, Au Bon Pain is shockingly vegan-friendly. The list of options is pretty long, and it contains soups, salads, bagels, bread, oatmeal, chips, fruit, and more!

Below, I’ll share more about how to order these items vegan, and some other menu items that are surprisingly not vegan. I’ll answer some common questions, and I’ll end with a look at the whole-food plant-based options, too!

The following vegan menu was compiled with the help of the menu and nutrition information on the Au Bon Pain website.

Ask for jelly, peanut butter, or hummus as a spread. They don’t have any vegan cream cheese, unfortunately.

Mainly, it’s the Asiago Breadstick that is NOT vegan.

Au Bon Pain shines when it comes to vegan soups. They actually have three different vegan soups in their normal rotation:

There are other soup that look like they might be vegan at first glance—Wild Mushroom Bisque, Tomato Basil Bique, and Roasted Eggplant Soup—but don’t be fooled. They are not vegan. The only fully vegan soups are the ones I listed above.

There seem to be multiple ways to get vegan salads at Au Bon Pain, but here are the two easiest options:

The “Classic Oatmeal” or “Hot Oatmeal” seems to come vegan by default. But beware—the “Overnight Oats” do NOT appear to be vegan. You can ask to confirm for your location, but that’s what I’ve seen as the general rule.

This is Au Bon Pain’s only vegetarian wrap. It usually comes with feta cheese, but if you order it “No Cheese,” then it’s vegan.

Exact chip selection will vary by location, but these are the ones they actually list on their website:

The exact fruit available will vary by location and season, but here are some of the options you’re likely to see:

You might see these listed as “Mixed Nuts” or “Assorted Nuts.” Really an interesting side. I’ve written vegan guides to around 100 restaurant chains now, and I can’t think of any others that have mixed nuts. The closest you see is free house peanuts at some steakhouses and stuff.

Here are the sauces and spreads you can use to amp up your breads, bagels, and more:

You might think the following items would be vegan, too—but unfortunately they’re not:

What if you’re not just vegan but also trying to avoid all processed foods? Can you get a whole-food plant-based (WFPB) meal at Au Bon Pain? That means no processed sugar, oil, or flour.

To keep things strictly WFPB, you’d want to focus on the salad, the fruit sides, and the oatmeal. It’s possible that one of the soups are WFPB, but I don’t have access to the full ingredients to confirm it. The mixed nuts probably contain oil.

It’s possible that the Whole Wheat Skinny Bagel or the Whole Wheat Tortilla Wrap might count as WFPB. But sometimes, products named “whole grain” are not actually 100% whole grain—they just contain some whole grains in a blend with refined grains. So without a full ingredients list, we can’t know for sure.

I’ve made vegan guides to nearly 100 restaurant chains. Check out the vegan options at some of these other chains: