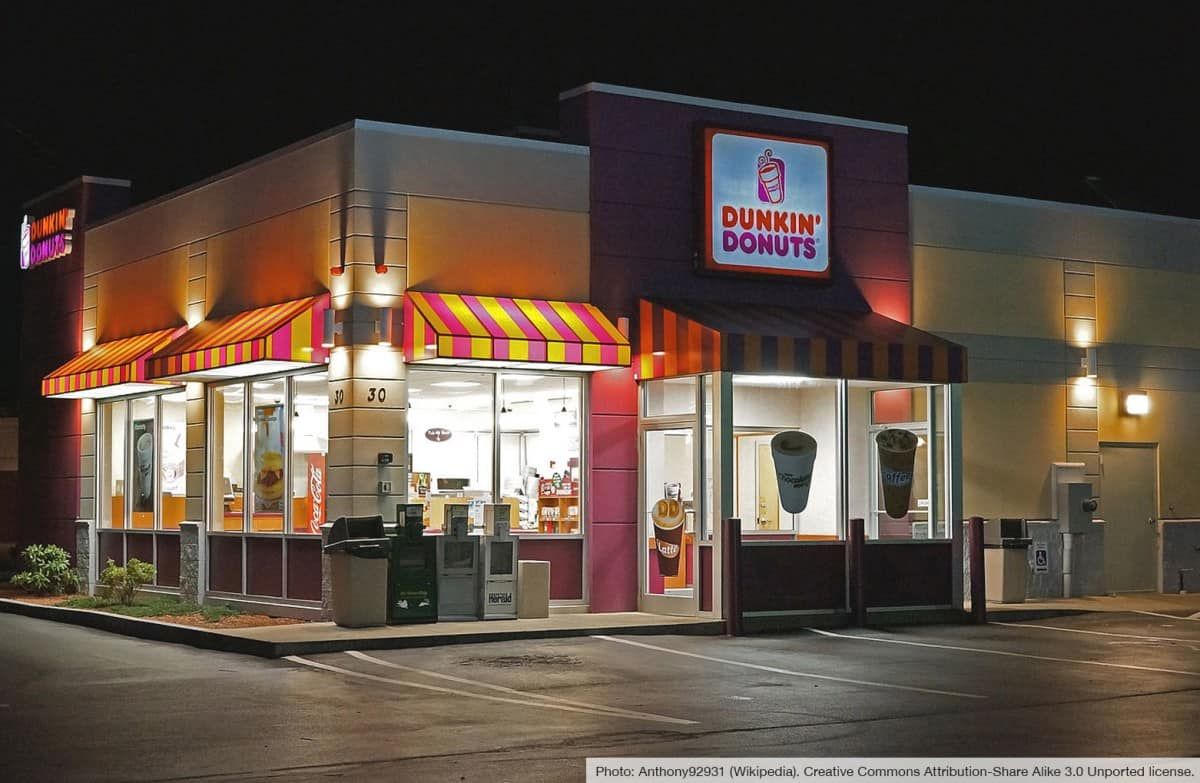 Let’s just get this out of the way immediately: Dunkin’ Donuts does not have vegan donuts. I know, I know… it’s so sad. But they do have quite a few other things we can eat. Including vegan sausage!

Below, I’ll share more on how to order these items vegan. I’ll also share the surprisingly NOT vegan items. I’ll answer common questions, then take a look at the whole-food plant-based (WFPB) options—for those trying to avoid processed food, too!

This vegan menu was compiled from the allergen info and ingredients lists on the Dunkin’ Donuts website. I also emailed Dunkin’ Donuts about a follow-up question.

Restaurant menus often change and vary by location. I recommend confirming any important information with staff at your Dunkin’ Donuts location.

I remember the last time I went to Dunkin’ Donuts, I got a half-dozen bagels. I just ordered them all Plain because I didn’t know which other ones were fully vegan.

Well, it turns out all these DD bagels are vegan:

Note: The Multigrain Bagel contains honey, but is otherwise vegan.

2. Beyond Sausage Sandwich (No Eggs or Cheese)

Dunkin’ Donuts has vegan Beyond Sausage patties! These allow you to actually get a good serving of protein with your meal. And they’re delicious, too.

Warning: The “Beyond Sausage Sandwich” menu item does contain cheese and eggs in its standard preparation. Same goes for the Beyond Sausage Wake Up Wrap.

So make sure to order these items without cheese and eggs. Basically, what’s left is an English muffin with a Beyond Sausage patty in it. So, nothing too fancy—but tasty anyway.

Note: You may also see “Veggie Bacon” or “Veggie Sausage” in certain menu items. These non-Beyond mock meats seem to contain eggs and milk, based on the ingredients lists on the Dunkin’ Donuts website.

3. Beyond Sausage Wake-Up Wrap (No Eggs or Cheese)

This is basically the same thing as the Beyond Sausage Sandwich—except it’s in a flour tortilla, not an English muffin. Again, you need to ask to get it without the eggs or cheese.

Hash browns are usually always vegan, unless they’re cooked with lard or animal fat. And in the case of Dunkin’ Donuts, they’re fried in vegetable oil, so yes—these beautiful round hash browns are vegan!

Note: These may be fried in shared fryers with animal products.

You may still want to check at your own location—to make sure they didn’t use milk to make it. But the official ingredients lists say it’s made with water, so it should be.

You’ll probably see it on the menu as:

This is just a simple English muffin—it’s vegan like they usually are. It comes as the bun for the Beyond Sausage Sandwich, but you can also get it alone.

Note: The “Multigrain Thin” is another type of “bun” at Dunkin’ Donuts, but it’s not strictly vegan, as it contains honey. (Some vegans are okay with honey, but many are not.)

Dunkin’ Donuts has a ton of coffee options. Below are all the vegan ones. Keep in mind that you can add sugar, oat milk, or almond milk to most of these:

They also have these packaged coffees and K-Cups you can buy:

Here are some of the vegan teas available at Dunkin’ Donuts, and then th

All those same teas are also vegan in their packaged versions that you can buy to make at home.

There are 3 different flavors of the Coolatta frozen drinks you can get vegan:

And these other fruity drinks also have vegan recipes:

Restaurants will commonly discontinue menu items, but then bring them back again. Or they may be only available at certain locations.

There are at least two interesting vegan Dunkin’ Donuts items from the past that you may want to keep an eye out for.

If your DD location has either of these, they’re likely to be vegan:

Here are some menu items that you might hope would be vegan—but they’re not:

Does Dunkin’ Donuts Have Vegan Donuts?

Dunkin’ Donuts does not have vegan donuts, dairy-free donuts, or eggless donuts. Their donut dough contains both nonfat dry milk and egg yolk.

Here is the ingredients list for their typical donut (without toppings):

Does Dunkin’ Donuts Have Vegan Coffee?

Dunkin’ Donuts has many vegan coffee options. Hot coffee, iced coffee, lattes, macchiatos, and Americanos can all be ordered vegan. They typically have oat milk or almond milk available to add, too.

Here are the non-vegan bagels at Dunkin’ Donuts:

Dunkin’ Hash Browns are confirmed vegan. They are fried in vegetable oil, not animal fat or lard. They contain no milk, egg, or other animal ingredients.

What if you’re not just vegan, but you’re trying to eat a whole-food plant-based (WFPB) diet? Can you exclude all animal products and processed foods, and still get a full meal at Dunkin’ Donuts?

You might be able to order the oatmeal without added sugar and brown sugar. I just sent Dunkin’ Donuts an email to ask about this. I’ll update this post if I hear back.

If you can’t get the oatmeal without sugar, then it’s probably just going to be coffee or tea for you. Unless you see another option at your location like bananas or another fruit side.

Most of the other vegan items contain highly processed ingredients:

Like most fast-food places, Dunkin’ Donuts is not great for WFPB. I’d maybe recommend checking out Wendy’s instead for the baked potato (see my full Wendy’s vegan menu).