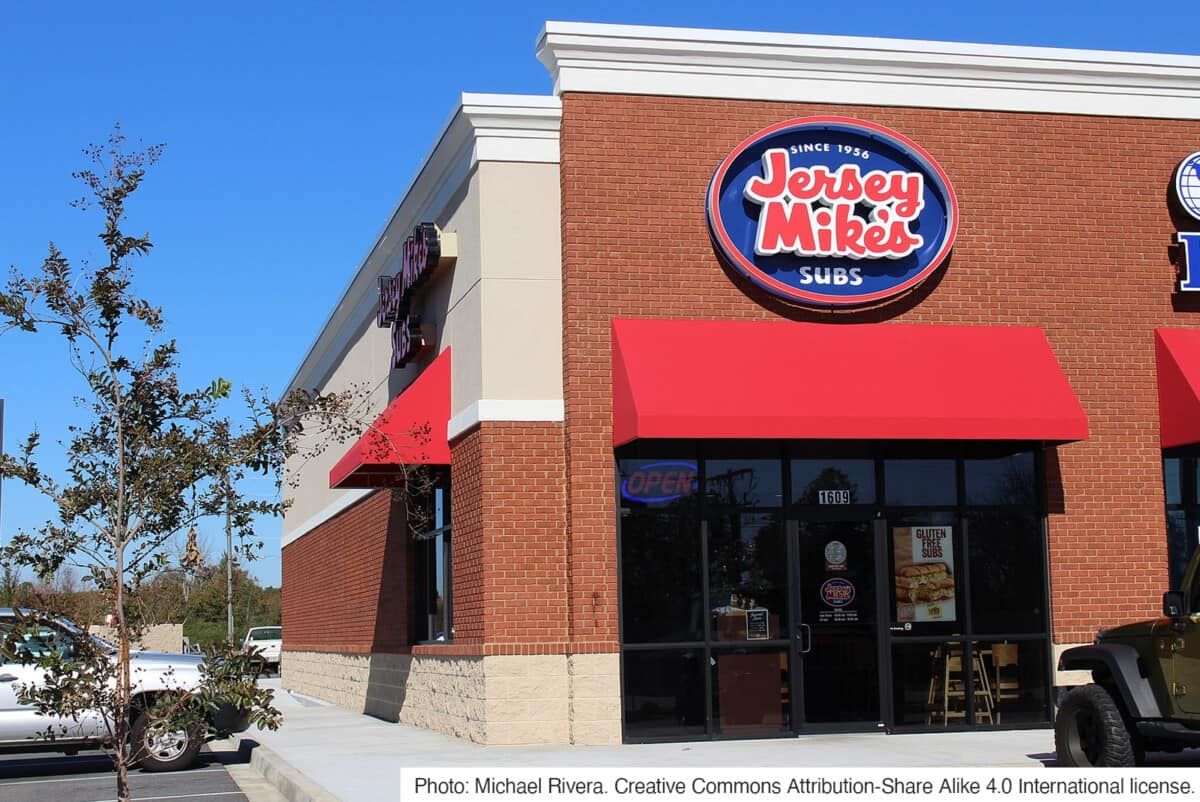 Jersey Mike’s is a popular sub shop with over 1,500 locations in the U.S. As with other sub shops, it’s easy enough to order a vegan sub and vegan sides if you know what you’re doing. So here’s what to look for.

One of the major vegan tips for Jersey Mike’s is that you can add avocado to your subs for free! Another note for strict vegans is that the wheat bread does contain a tiny amount of honey (it’s the last ingredient).

Keep reading for more on how to build your vegan order (like more detail on these breads). I’ll also share how I’d order at Jersey Mike’s on a whole-food plant-based (WFPB) diet, which is more strict about avoiding processed foods!

Without further ado, let’s get into the Jersey Mike’s vegan menu!

Jersey Mike’s offers a vegetarian cold sub called the Veggie Sub. To make it vegan, you just have to ask them to make it without cheese.

Here are the ingredients of the Veggie Sub, with the cheeses crossed out at the top to make it vegan:

You can also ask them to replace the cheese with avocado. In my experience, they’ll happily do so free of charge. This is pretty legit because avocado costs extra at a lot of places.

2. Build Your Own Sub

If the Veggie Sub isn’t very close to what you want, you can also just build your own vegan sub from the ground up with the following options.

Other vegan wrap options they may have in place of bread:

Veggies, condiments, and sauces to add to your vegan sub:

Some locations may have additional vegan sauces and condiments like Teriyaki sauce, Buffalo sauce, and sauerkraut.

Note that the main sources of actual calories here would be the bread, avocado, and olive oil. So if you’re trying to fill up for a while, I would maybe ask for extra avocado.

Like most sub shops, Jersey Mike’s has a few different kinds of chips available. Usually, these will be Lays chips, Baked Lays, Sun Chips, Fritos, and other popular brands.

Most of these are vegan. I wrote a post about Baked Lays specifically—the original flavor is vegan, but the BBQ is not. (That said, the Classic BBQ Lay’s are vegan. Again, more info in that other post.)

Most Jersey Mike’s locations offer a tossed salad that is vegan. The standard ingredients are lettuce, tomato, cucumber, and green bell pepper.

This is more of a side salad, not super filling, but it’s good to have some healthy options for getting your veggies in.

That said, I also get a sense that different locations offer different salads, so just be mindful of the ingredients and ask what’s in them.

Some locations may have more Southwestern salads that include some rice or corn. Those might be a bit more filling if they’re available.

Here’s a typical selection of drinks at Jersey Mike’s, all of which are vegan to my knowledge:

I do have separate posts on vegan energy drinks, vegan sports drinks, and a few vegan sodas if you want more reassurance on that front.

I found references some places online to Jersey Mike’s Vegetarian Vegetable Soup. It appears to be vegan. However, I don’t see it listed on their website anymore, so it may not be available.

Check at your local Jersey Mike’s to see if they still have this option!

Some locations of Jersey Mike’s supposedly have french fries—but it doesn’t seem common. That said, they’re listed in the nutrition facts on the company’s website, so I wanted to include them here.

If the Jersey Mike’s location you’re going to does have fries on the menu, then those are another vegan option for you.

If you’re trying to eat a healthy whole-food plant-based diet—not just vegan—then what options do you have at Jersey Mike’s?

You’d probably want to build your own sub. Start with the wheat bread (may not be 100% whole-food, but it’s closer than the white bread). Load it up with avocado and veggies. Avoid the olive oil blend and any sauces that probably have sugar (like the teriyaki sauce and mustard).

Get a tossed salad on the side—no chips. And for the drink, you’d probably want to just go for water (or Lifewtr, or club soda from the fountain machine).

If you need to look up more allergen info and nutritional facts for Jersey Mike’s check out this section of their website. It’s where I sourced most of the information for this post.