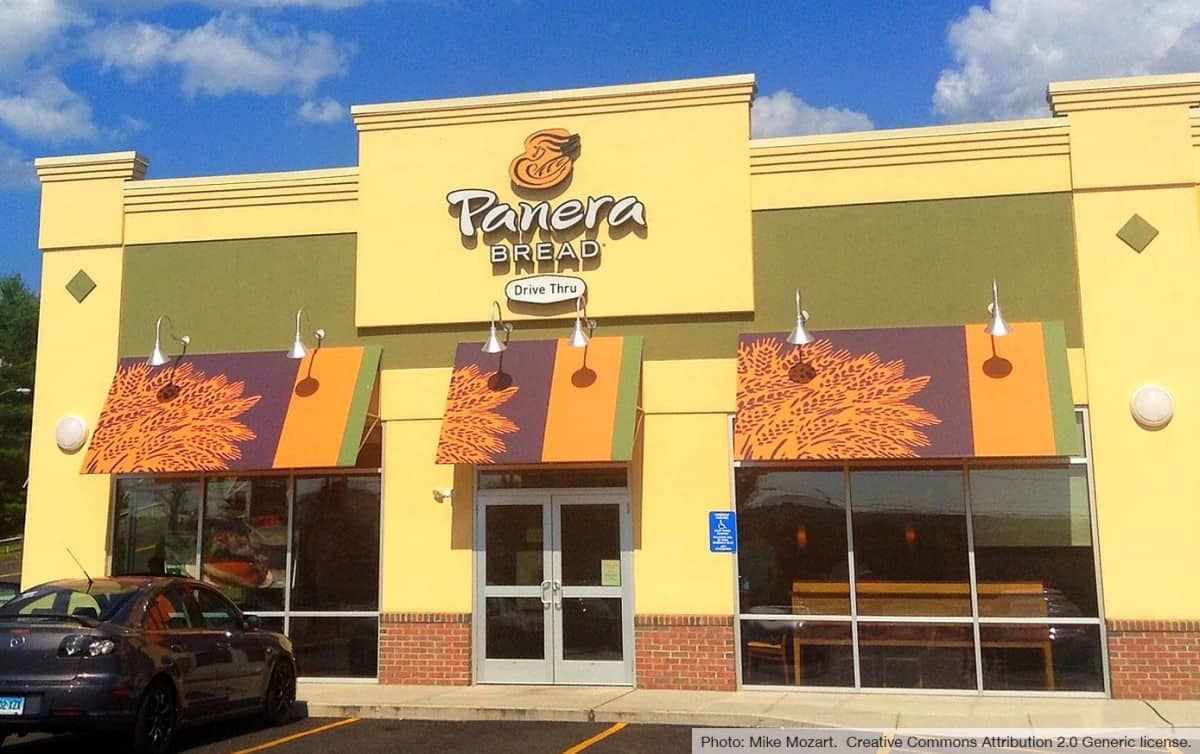 Panera is one of my regular “haunts,” as a vegan. It’s a comfy place to go use the wifi, and there are plenty of vegan menu items, too. And in this post, I’m going to outline all of them for you!

Below, I’ll share how to order these items vegan. I’ll also share which items are surprisingly NOT vegan. I’ll end the post with a guide to the healthiest vegan options at Panera (whole-food plant-based ones)!

The following menu was made using the ingredients lists on the Panera website. Panera actually has a decent page on their site about vegan options… but it left me still wanting more detail. So I set out to create my own guide.

Remember that menu items often change and vary by location. So double-check any important points with staff at your local Panera.

This is a totally vegan soup—no customization needed!

Really one of the gems of the Panera vegan menu.

Here are all the vegan breads at Panera:

And here’s why the other bread options are not vegan:

And here’s why the other bagels are not vegan:

In most of those, the milk apparently comes from a type of “confectionery drop” they use for the flavoring.

I always appreciate when restaurants have oatmeal as a vegan option—even if it’s much cheaper to eat it at home. It can help me eat healthy while traveling.

Steel-cut oatmeal is a bit healthier than normal oatmeal or quick oats, too. The grain is less processed, and your body digests it slower—so it tends to be a calmer insulin response.

That said, if you want a really healthy oatmeal, you may need to ask for the cinnamon sugar topping to be left off.

They may offer some other toppings for the oatmeal, too. But this is the one they’re really pushing and have full information for on the website. So it’s the one I can definitely confirm is vegan and still available at most locations.

There are no Panera sandwiches that come fully vegan on the normal menu. But this Mediterranean Veggie sandwich is meatless and can be made vegan.

I’m not sure if all Panera locations still have this—but it’s been a vegan staple for years, so I’m going to include it.

You can’t go wrong with this bowl!

These potato chips are actually made by the Panera brand itself. And they’re pretty good. The full name is “Panera Kettle-Cooked Potato Chips.”

None of the salad entrees at Panera come totally vegan. But you can put together a vegan salad with a custom order. Below are some suggestions from the Panera website itself.

Those all come with vegan salad dressings already. But if you want the full list of dressings, here are the vegan ones:

Note: The Green Goddess Dressing is not vegan, as it contains milk ingredients.

Typically you have a few fresh fruit options. These are common:

There’s also a Pickle Spear available. (I didn’t want to make a separate menu item just for that—so here, I’ll put it with the fruit!)

These two smoothies are fully vegan—even without needing to customize the order:

The other smoothies at Panera come with Greek yogurt or other animal ingredients. But you may be able to custom order those as vegan, too, if you prefer. Just ask staff at your location.

Whether you want coffee, juice, or soft drinks, there are plenty of options at Panera:

Here are some of the menu items that you’d hope might be vegan, based on their names—but they’re not:

Now let’s answer some common questions about how to eat vegan at Panera.

Is Panera Mac and Cheese Vegan?

Panera Mac and Cheese is not vegan. It is made with dairy cheese from cow’s milk, not vegan cheese.

Do Panera Bagels Have Dairy?

Is the Sourdough Bread at Panera Vegan?

Panera Tomato Basil Bread is generally not considered vegan. This is because it contains honey, which is an animal product. However, it’s unclear what level of consciousness or sentience bees have, so many vegans are okay with eating honey.

Therefore, whether Panera’s Tomato Basil Bread is vegan is part of a much larger debate about whether honey is vegan!

What if you’re trying to eat a vegan diet without any processed food? Can you get a whole-food plant-based (WFPB) meal at Panera Bread? Let’s see which options are free of animal products, refined oil, refined sugar, and refined flour.

Well, for starters, the fresh fruit is clearly WFPB:

Next, let’s talk about the smoothies. I’d personally count the following two smoothies as being WFPB. The only concern I see is that they both contain fruit “purees” and “juice concentrates,” and those may act pretty similarly to processed sugar in the body:

The standard preparation for the “Steel Cut Oatmeal with Strawberries & Pecans” is not 100% WFPB, as it contains a “cinnamon sugar topping” and the pecans are oil-roasted. But you should be able to custom order a WFPB version without those ingredients if you like.

The Ten Vegetable Soup is not 100% WFPB, but it’s pretty close. It just contains some corn oil in the vegetable stock, and a small amount of sugar in the soy sauce that’s included.

The Mediterranean Veggie Sandwich (customized as shown above) is not 100% WFPB—the hummus has canola oil, the “Peppadew” peppers have some added sugar, and all the breads have processed flour. But it’s still a pretty healthy option.

You can also put together a very healthy salad, obviously! The only difficulty is that all the salad dressings contain oil and/or sugar. So there’s no fully WFPB salad dressing.

Overall, Panera Bread is low on fully WFPB options… but they have more options that are “pretty close” than most restaurants do.