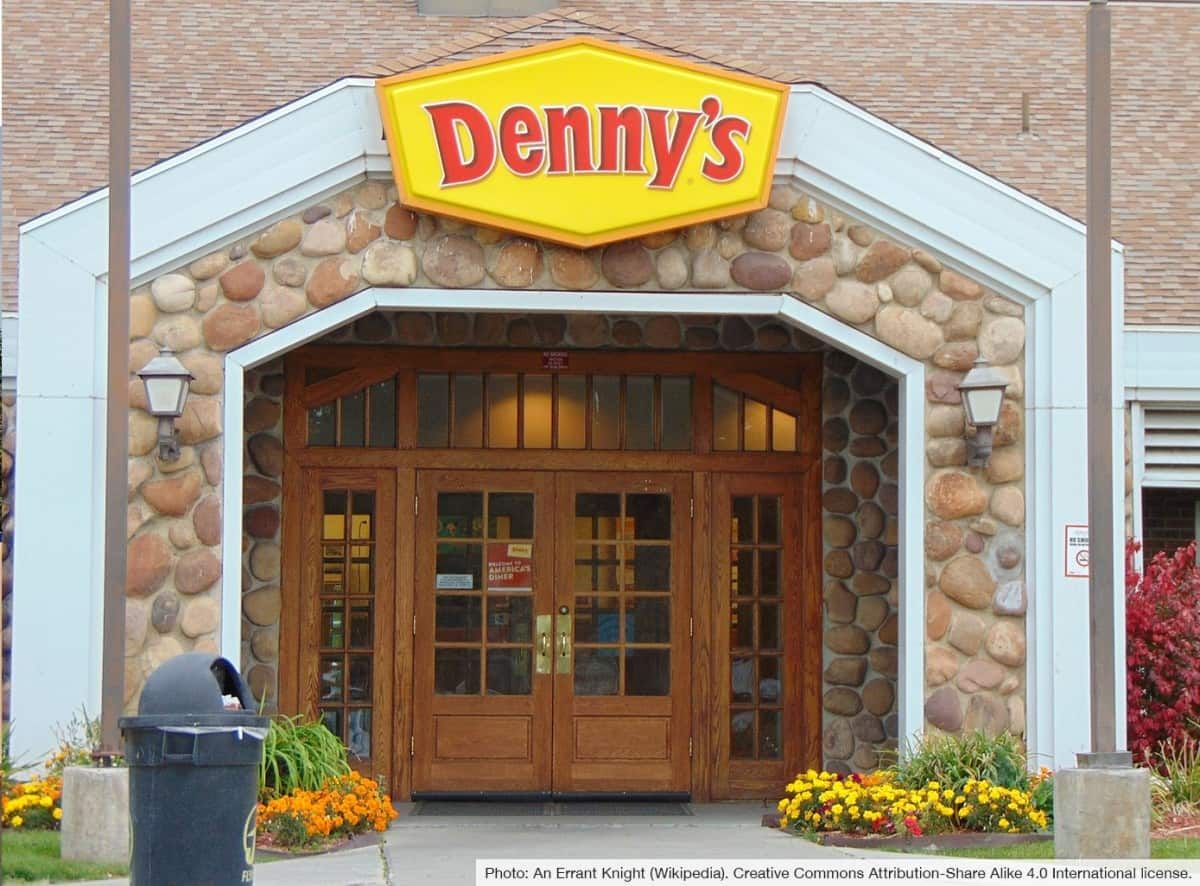 Denny’s is actually a pretty good place for vegans—but only if you know what you’re looking for. There’s so many animal products on the menu, it can be hard to find the vegan options. So here I’ve finally laid them all out in one place.

Below, I’ll share how to order all these items vegan. I’ll also share which menu items are surprisingly NOT vegan. Then I’ll answer common questions, share my best vegan dessert tips, and look at whole-food plant-based (WFPB) options—for health nuts like me!

This menu was created with the help of the allergen info on Denny’s website, along with other resources online.

Restaurant menus often change or vary by location. I recommend double-checking important information with staff at your local Denny’s.

Yes, Denny’s has the Beyond Burger! You’ll probably want to order this with the “Build Your Own Burger” option, and just choose all your own specifications.

Ask for No Cheese. It comes with lettuce, pickles, red onions, and tomato. The standard Multigrain Bun or Brioche Bun is fine. You can get ketchup, mustard, BBQ sauce, or Bourbon Sauce on it.

Avoid the “All-American Sauce”—it’s often suggested for Denny’s burgers, but it’s not vegan.

Denny’s used to also have a “Veggie Patty” that was vegan. (More like a “garden burger” type of thing.) But I think they got rid of that when introducing the Beyond Burger. So you likely won’t see it—but if you do, it’s vegan, too.

Denny’s has a bunch of vegan bread products. Get any of these with peanut butter and jelly, or use them for a Beyond Burger or other creation:

3. Oatmeal or Grits (No Dairy)

Both of these should be prepared vegan, but it’s always a good idea to double-check. Exact recipes and routines can vary from location to location with some of these chain restaurants.

I’d just ask them to make sure that no dairy is included. They should take that seriously, as many people are allergic and intolerant to dairy.

Personally, I love these dishes—even though they’re so much cheaper to just eat at home. I especially like knowing which restaurants have oatmeal, so I can get a healthy breakfast when traveling.

French fries are the classic vegan option at chain restaurants, even when there’s basically no other options. Well, Denny’s has two different vegan Fries options, and they’re both pretty fun:

These are cooked in vegetable oil, not animal fat—so no worries there. However, like at most restaurants, the fries are likely to be cooked in the same fryers as animal products. So if that’s objectionable to you, be sure to ask at your location.

I really appreciate when restaurants offer a plain baked potato. Especially for more health conscious vegans, it can get old when the main options are fried food like Hash Browns and Fries.

Some restaurants like Texas Roadhouse actually cover their baked potatoes with animal fat, so they aren’t vegan. But this is not an issue at Denny’s! Their Baked Potato is good to go.

Despite what I said above about liking the Plain Baked Potato for health reasons, it’s hard to resist the Hash Browns, too! Have them add some extra veggies or avocado to fill out this vegan dish.

I’m not actually sure how many Denny’s locations still have these. But they used to be a go-to vegan choice at Denny’s. So I’ll include them here, in case you see them.

All of these need to be customized, but basically you’ll be getting a bunch of veggies and potatoes, seasoned in a breakfast skillet:

You can also get a number of veggies added to any of your meals. Here’s what they’ll typically have:

Be sure to get this without cheese and croutons. It’s a pretty basic side salad, but it’ll give you some fresh greens at least.

Here are the vegan salad dressings to choose from:

Yes, it’s a whole grain, at a chain restaurant! This is a great choice to add some healthier calories to your meal. Obviously, you’ll want to order this without the optional “Parmesan Sauce.”

This will vary based on the location and season, but will likely include grapes, berries, melon, orange, or apple. A solid addition to a vegan meal at Denny’s!

Denny’s will typically have some spaghetti they use for a Kids meal if nothing else. Unfortunately, the “Tomato Sauce” they put on the spaghetti is not vegan. But you can potentially get just the noodles.

Denny’s “Zesty Nachos” are pretty far away from being vegan—they come with cheese, meat, and sour cream. But you can potentially just get the tortilla chips with some salsa or another topping from the extras list below.

Keep these extras in mind to add to your dishes!

There are plenty of vegan drink options, too:

Here are some menu items you might hope would be vegan—but they’re not:

Denny’s pancakes are not vegan. Both the Buttermilk Pancakes and the Hearty 9-Grain Pancakes at Denny’s contain eggs and milk.

Denny’s waffles are not vegan, as they contain milk and eggs.

Denny’s Brioche Bun, Multigrain Bun, and Split-Top Bun are all confirmed vegan. They don’t contain milk, eggs, or any other animal ingredient.

Does Denny’s Have Vegan Ice Cream?

However, if you stop by Dairy Queen afterward, you can get a new vegan ice cream bar there! (See my Dairy Queen vegan menu for the details.)

Does Denny’s Have Any Vegan Dessert?

Denny’s doesn’t really have a proper vegan dessert option. However, you can potentially pull something together if you’re creative.

Here’s what I’d do if I was personally determined to eat vegan dessert at Denny’s. I’d start by asking for one of these starchy and salty (but kinda plain) options:

Then I would combine it with some of the “sweet” sauces or toppings that are vegan:

Can you find a combination that looks good? Personally, I could see a dessert bagel being pretty good. Get some peanut butter spread on it, then add the Cinnamon Crumb, Powdered Sugar, and maybe Chocolate syrup?

Or drizzle those same toppings over a plate of Wavy Fries? Or add them to a bowl of plain Oatmeal? Sounds good to me.

Which Sauces Are Vegan at Denny’s?

Is the Veggie Patty at Denny’s Vegan?

The Veggie Patty at Denny’s is vegan—it doesn’t have milk or eggs in the ingredients. Its replacement, the Beyond Burger patty, is also fully vegan.

What if you’re trying to eat a really healthy vegan diet? Can you avoid animal products and processed foods, and still get a full meal at Denny’s?

It’s hard to know every ingredient in Denny’s items for sure because they don’t have full ingredients lists online currently.

But here are the whole-food plant-based (WFPB) options I potentially see:

With the Oatmeal, you’d have to figure out how you’re going to season/flavor it. You don’t want them adding sugar if you’re trying to keep it WFPB. Maybe just get the seasonal fruit with it, and add that in.

With the Broccoli and other veggies, make sure they are steamed, not cooked with processed oils. Broccoli is the most common vegetable to be offered steamed, but you’d have to double check with any of these on the cooking method.

The 7-Grain Bread and Multigrain Bun may be close enough that you’re fine with eating them. But I wouldn’t count on them actually being 100% whole grain. They’re likely only partly whole grain.

One of the tips I share sometimes for eating WFPB at restaurants is this: Bring your own nutritional yeast shaker. You can add it to salad, baked potatoes, or anything else that might be bland when ordering it plain.