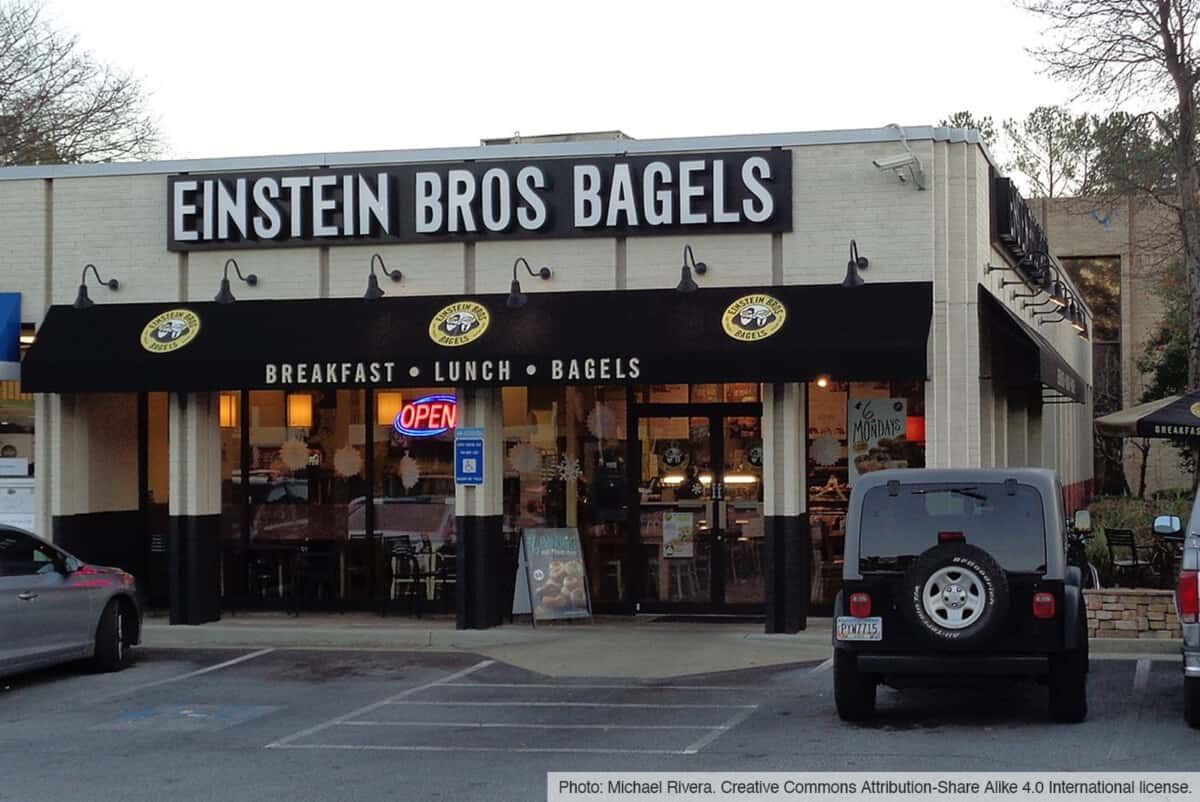 I never had bagels until adulthood. I know—it’s tragic. But in the past 14 years as a vegan, I’ve discovered the world of bagels. Within that world, Einstein Bros is one of the bagel shops I keep finding everywhere. And I’ve also found they have plenty for us vegans.

Vegan options at Einstein Bros include these bagels:

Einstein Bros also has vegan options like the Avocado Veg Out sandwich (if you swap out the schmear), the vegetarian chile, and even the Cinnamon Twist desserts.

Keep reading for the full list of vegan options, including sides, spreads, and beverages. I’ll also cover a few bagels that sound like they would be vegan, but actually aren’t!

As a vegan, I was a little frustrated by the Einstein Bros website. The menu page says that the symbol “VG” is used for vegan options…. but I could find nothing on the website labeled “VG.”

Many bagels are only labeled as “DF” for dairy-free on their website, but when you read the ingredients, they are in fact vegan.

Maybe they are hesitant to claim their bagels are vegan due to iffy ingredients like sugar.

Anyway, I went through all the ingredients lists and nutrition facts sheet to confirm which ones are actually vegan. Here are the results!

These bagels are loaded up and pretty extravagant. Here are the vegan ones from this category:

Would be vegan if it wasn’t for the honey: Power Protein

I was excited about a couple of these! Here are the vegan signature bagels:

These classic bagel options are vegan:

Would be vegan if it wasn’t for the honey: Ancient Grain and Honey Whole Wheat.

These are thinner and lower in calories compared to the classic bagels. Here are the vegan ones:

Would be vegan if it wasn’t for the honey: Ancient Grain Thin and Honey Whole Wheat Thin.

These vegan specialty breads can be used at most Einstein Bagels locations, too:

Most of the “Schmears” at Einstein Bros are made of milk and are not vegan. However, they have recently added vegan cream-cheese Schmear at most locations. (source)

There are also other options for spreads and sauces to add to your bagels:

Note: The Roasted Tomato Spread and the Basil Pesto both contain dairy.

You can add these veggies to your bagel, too:

Note: The granola and the sauteed mushrooms both contain dairy.

The Avocado Veg Out sandwich on the lunch menu is vegetarian. It does contain milk, but it can be made vegan by requesting it without the “Garden Veggie Shmear.” You can potentially ask them to replace it with hummus or the vegan cream-cheese Shmear (if available).

And there’s vegan dessert at many locations, too!

Are the Twice-Baked Hash Browns Vegan?

The Twice-Baked Hash Brown at Einstein Bros is not vegan, as it contains cheese. This is disappointing because hash browns can easily be made vegan, and it’d be another option for us vegans.

I like to include this section in all my vegan guides to restaurants. Besides just “vegan” food, I like to look at the menu and ask the question: What can you eat there that’s really healthy? What if you’re on a whole-food plant-based diet, without processed food?

In that case, I’d probably go for the Whole Wheat Thin bagel. That’s probably more of a “whole grain” than the other bagels. Then you actually have a decent number of options for what to add to it:

You could also get the fruit cup, and potentially the vegetarian chili, too. (I’m not sure if the chile contains any sugar or oil, but it’s probably not a lot.)