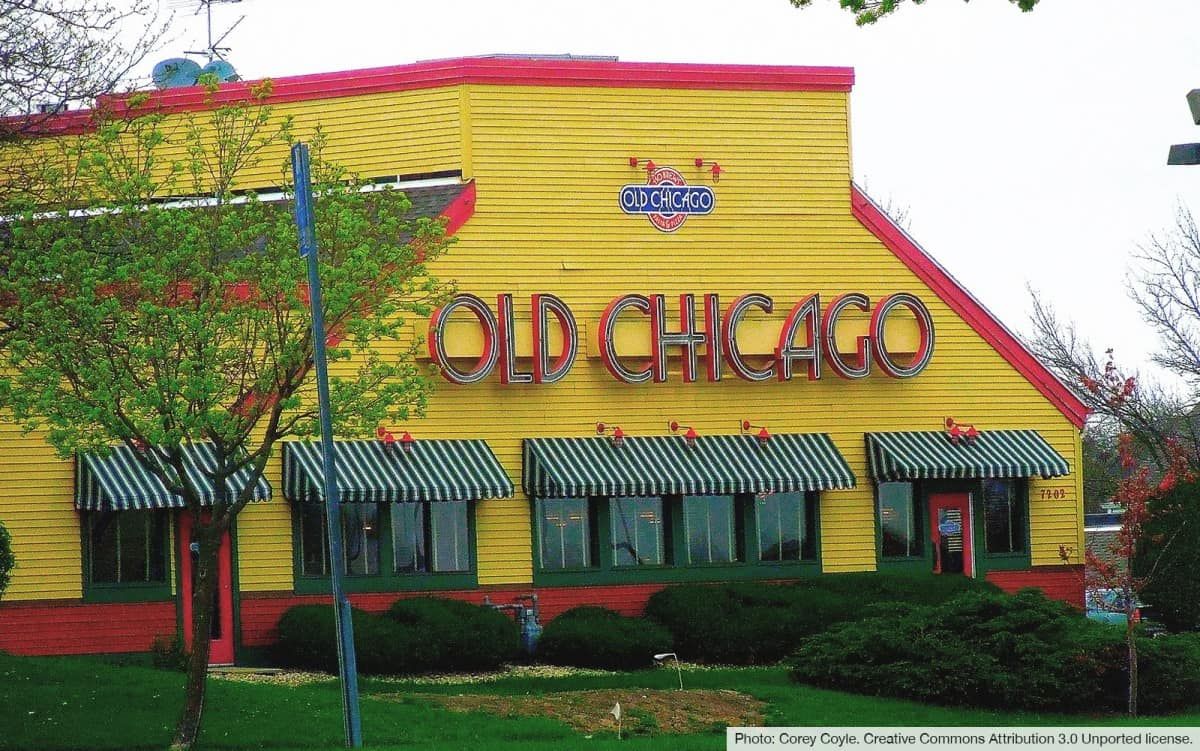 Old Chicago doesn’t have any options for vegan pizza. Even if you remove the cheese, the crust is still not vegan. Disappointing, right? But fortunately, when you look through the whole menu, there’s still quite a bit for us vegans to eat.

Below, I’ll share more tips on how to order these items vegan. I’ll also include a list of menu items that are surprisingly NOT vegan. And I’ll answer your questions about whether you can get vegan pizza at Old Chicago.

This vegan menu was compiled with the help of the nutrition calculator on the Old Chicago website. I wasn’t able to get full ingredients lists, but with the allergens and my experience as a vegan dining out for 13 years, I feel pretty confident with this list of options.

However, keep in mind that restaurant menus change and often vary by location. This is definitely the case with Old Chicago—I noticed some differences based on location. I recommend double checking any important information with staff at your local Old Chicago!

1. Salad (Without Croutons and Cheese)

There are a couple ways to order a vegan salad at Old Chicago. First, the Garden Side Salad is vegan except for the croutons. So you could just order that simple side salad without croutons.

Another option: The Mediterranean Salad is vegan if you just remove the Feta Cheese Crumbles. It comes standard with the Greek Dressing, which is vegan.

Here’s a longer list of vegan salad dressings to choose from:

Ask to get this wrap made dairy-free by removing the Artichoke Dip and the Feta Cheese Crumbles. It’s mainly just a Piadina wrap packed full of veggies!

I actually wasn’t able to confirm what the fries are cooked in. So you may want to double-check with staff to confirm that they’re not fried in lard or animal fat.

However, after checking the vegan options at 70+ restaurant chains, I can tell you that it is very uncommon for french fries not to be vegan. So without a clear sign to the contrary, I would assume the fries are cooked in vegetable oil, not lard.

That said, it is very likely that the fries are cooked in the same oil as some meat or other animal products. So if that kind of cross-contamination bothers you, you may want to ask about the fryer setup at your local Old Chicago.

Old Chicago also offers Sweet Potato Fries! But be sure to order these without ranch dressing or diced bacon, as those may come standard with the dish, depending on where you’re ordering it.

If you ask for this pasta dish without the roasted chicken and feta cheese crumbles, then it’s vegan. It’s basically a bowl of cavatappi pasta and veggies! Awesome, right? Enjoy!

Chips and salsa are a great, simple vegan side. This may not be available at every Old Chicago location, but it’s listed in their nutrition calculator, so it must be offered some places!

There are four different options for toast:

All of these are free of dairy and egg. My only concern from a vegan perspective would be that the wheat bread might contain honey.

Be sure to ask for your toast without butter. Instead, ask for some jelly and/or peanut butter.

Another option for fried potato good-ness at Old Chicago! The hash brown patty is part of the breakfast menu. The same disclaimer applies that I mentioned for the French Fries: I wasn’t able to actually confirm the cooking oil, and some cross-contamination in the fryer is likely.

Just another simple side option. I believe this is just a bowl of whole-kernel corn. Not sure actually. I couldn’t find a picture of it. Maybe it’s corn on the cob.

There are a few options for fresh fruit at Old Chicago. First, on the breakfast menu, you’ve got the Fresh Fruit Bowl. That typically comes with apple slices, blueberries, cantaloupe, grapes, orange slices, and strawberries.

You might assume that some of the following items would be vegan, too—but unfortunately, they’re not. First, let’s cover the pizza crusts.

None of the pizza crusts at Old Chicago appear to be vegan:

Devastating, right? Pizza crusts are often vegan, but even from this whole list of crust options, Old Chicago doesn’t even have one vegan crust.

Here are some more menu items you might’ve thought would be vegan, but they’re not:

Old Chicago pizza crust is not vegan. All six of the pizza crusts listed on their website contain egg, milk, or both.

This is disappointing, as pizza crusts are vegan at many other restaurants. It shouldn’t be hard for Old Chicago to provide a vegan option, but apparently (according to their own nutritional calculator) they have failed to do so.

What if you’re not just vegan but also trying to avoid all processed foods? Can you get a whole-food plant-based (WFPB) meal at Old Chicago? Let’s take a look.

Depending on the details, you might be able to include a slice or two of wheat toast, as well.

And if you’re not super picky about having a little refined flour and oil, you could go with the Grilled Fresh Veggie Italian Wrap, customized as listed above. It wouldn’t be 100% WFPB but would allow you to add more vegetables without including anything too processed.

Where to Get Vegan Pizza

If you’re disappointed by the lack of vegan pizza options at Old Chicago, then check out these other options. Do you have any of the following in your city?