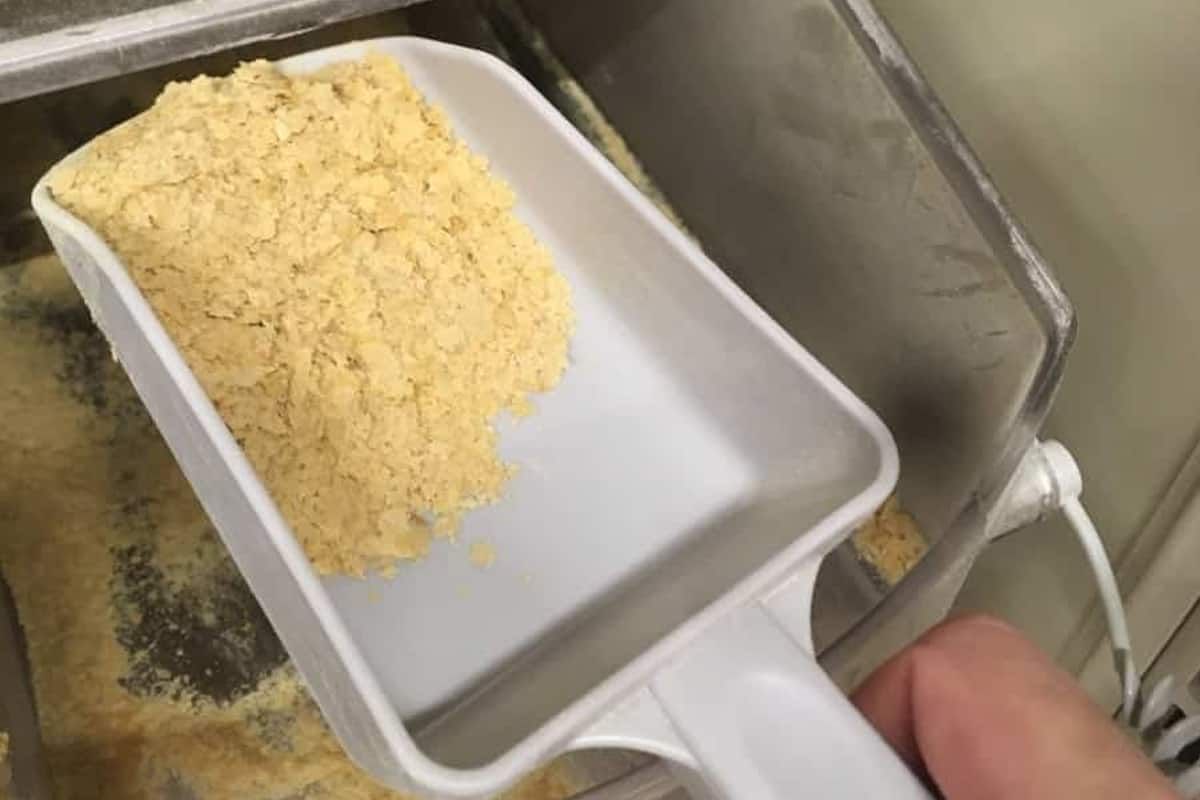 I’ll just start this post by saying: I love nutritional yeast. I put it on everything. Recently I started hearing about Brewer’s Yeast, too. At first, it seemed confusingly similar to nutritional yeast. So what are the actual differences between the two?

Below I’ll share some more interesting differences, though. One of these differences has to do with brewer’s yeast having benefits for breastfeeding women specifically.

First, let’s start with the similarities between these two yeasts:

Really, they have more similarities than differences. They’re derived from the same organism and made in similar ways, with similar benefits.

Here are the main differences between brewer’s yeast and nutritional yeast:

Taste is really the most noticeable difference for most of us. Personally, I’d recommend trying both and then sticking with the one you like the taste of more.

But I’ll cover the rest of these differences below, too.

You can find these yeasts in the store with the health foods, baking goods, or in the condiment aisle. When properly stored and maintained, they can last about 2 years.

I have a whole post on the best nutritional yeast brands. For brewer’s yeast, probably the best is Solgar. If you want tablets, try Swanson Brewer’s Yeast tablets. (Those are Amazon links.)

How These Yeasts Are Made

Nutritional yeast is made by growing S. cerevisiae in a glucose-rich medium. The glucose is commonly derived from molasses. Other sources of glucose can be whey, sugar cane, or sugar beets.

After that, it’s deactivated with heat, washed, pasteurized, and dried. The final product can be flaked or crumbled. Then it’s packaged for use.

Brewer’s yeast was originally a result of the beer-making process. The yeast cells were then pasteurized. After that, they’d be deactivated as part of the manufacturing procedure. This step makes brewer’s yeast inactive (unable to make dough rise).

From what I can tell, nowadays both are made in very similar ways. Some brewer’s yeast products will specify that they were made on molasses, just like nutritional yeast.

Nutritional Benefits of Each

Nutritional yeast and brewer’s yeast contain many of the same health benefits as each other. These are due to the beta glucans, protein, vitamins, minerals, and antioxidants.

Both these yeasts been shown to have antibacterial and antiviral properties. This is thanks to a specific type of carbohydrates—beta glucans—that boost the immune system and fight infection.

There’s research showing you can reduce your chances of getting the common cold with just 1 spoonful of these yeasts per day. (source)

But that’s not all these amazing beta glucans do for us. They also help lower cholesterol levels and control our blood-sugar levels. (source)

That’s a lot of protein!

The exact amount of vitamins in your brewer’s yeast or nutritional yeast will depend on whether it’s fortified. Some vitamins naturally come with the yeast. Others, like B6 and B12, are only added through fortification.

But generally, these yeasts are packed with B vitamins. These vitamins play a vital role in bodily functions like:

One antioxidant that’s found in abundance in nutritional yeast and brewer’s yeast is glutathione. Glutathione has a ton of amazing benefits, including reducing oxidative damage from free radicals that cause aging.

Here are some of the other minerals found in nutritional yeast and brewer’s yeast:

The chromium in brewer’s yeast specifically gets a lot of attention for helping with blood-sugar control. (source)

Heathline has a whole post about it. It’s not actually proven in clinical trials, but many women agree: “Lactation cookies” baked with brewer’s yeast increase their milk supply.

Here’s a recipe for some vegan lactation cookies if you want to try it yourself!

Does nutritional yeast have the same impact on lactation? I found conflicting opinions on that. But honestly, it hasn’t really been studied yet at this point. So it’s anybody’s guess.

The Difference in Taste

This is one of the areas where there is actually a significant difference between nutritional yeast and brewer’s yeast!

Nutritional yeast has a cheesy, nutty flavor. It’s commonly used to replace cheese and dairy ingredients. Some people even include it in smoothie recipes.

Brewer’s yeast has a more bitter taste. Some even claim it has a beer-like aftertaste.

How Are They Each Used in Recipes?

Nutritional yeast is a wonderful alternative to dairy cheese in certain recipes. This is because it doesn’t contain any animal-derived ingredients, yet it has a cheesy flavor. It’s often used as a condiment or seasoning.

A few great ideas for using nutritional yeast include:

Brewer’s yeast can also be sprinkled over pretty much any of your dishes. You can also use it in smoothies, in your cereal, or sprinkled on a pizza.

Many people also use brewer’s yeast in baked goods. They add it to cookies and stuff like that. “Lactation cookies” are a common recipe mentioned above. Bread can also be baked with brewer’s yeast.

Some people recommend not cooking or baking with brewer’s yeast. They argue that heating it results in reduced B-vitamin content. But I haven’t seen great evidence of that.

You can also take tablet supplements of either brewer’s yeast or nutritional yeast if you don’t like the taste. (It’s not for everyone!)

We’ve been talking about all the benefits and uses of these two types of yeasts. Yet neither one is necessarily for everyone.

Nutritional yeast has been approved by the FDA, but there are certain cases where it’s best to avoid it. Specifically, people with Crohn’s disease should avoid nutritional yeast and brewer’s yeast.

Similarly, brewer’s yeast isn’t recommended for anyone who suffers from Crohn’s disease. Also, if you suffer from chronic migraines, it can potentially be a trigger and set them off.

If you have frequent stomach upsets or chronic irritable bowel syndrome (IBS), you may want to reduce your intake of these inactive yeasts. There’s a chance it could relieve symptoms like gas and bloating.

Luckily, however, the amount of lead in any nutritional yeast brand was not at a level that should cause much concern. Still, you may want to limit your portion size if you’re pregnant. More details in this post.