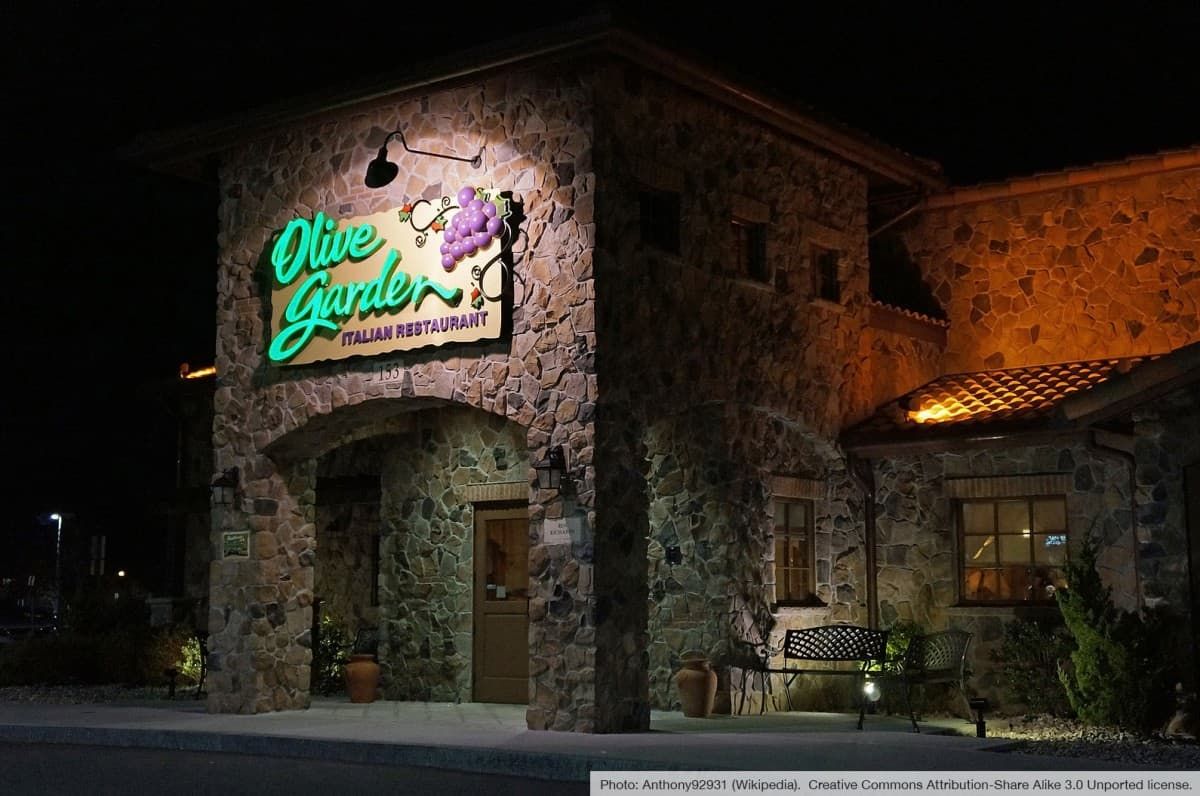 I have a secret… Want to hear it? I love breadsticks. Especially garlic ones. And for that reason, I’m always happy to come along to Olive Garden as a vegan. But breadsticks aren’t the only option we have there.

Below, I’ll share exactly how to order these items vegan. I’ll also share which menu items are surprisingly NOT vegan. I’ll end with a whole-food plant-based (WFPB) menu—for the vegans who want to avoid processed food, too!

The following vegan menu was made with the help of the Olive Garden website, which has a pretty good vegan and vegetarian page.

Keep in mind that menus may change or vary by location. Ask the staff at your Olive Garden location to double check any information in this post.

Gotta love vegan breadsticks! Even at restaurants where you have to order them dry, they’re still a treat. But at Olive Garden, even the garlic topping is dairy-free and vegan. So you can order them the normal way!

Get the warm marinara sauce to dip them in. Delicious!

Minestrone soup is sometimes vegan, sometimes not. It can be a toss up when you see it on a restaurant menu. But at Olive Garden, it’s fully vegan!

No customization needed to make it vegan. It’s just veggies, beans, and pasta, together in a tomato broth.

Unfortunately, none of the other Olive Garden soups can be ordered vegan.

The “Famouse House Salad” at Olive Garden is mostly vegan. You just need to order it without croutons and switch the dressing to “Oil and Vinegar” (it’s Extra Virgin Olive Oil & Balsamic Vinegar).

It’s just a basic house salad, not a whole entree or anything—but it’s a good option to start things off with.

If you want a ready-to-go vegan pasta option, you can grab the spaghetti and marinara. It’s a simple dish that comes vegan in its standard preparation.

See the next section if you want to substitute in other kinds of pasta noodles.

5. Create Your Own Pasta Dish

This will be the entree of choice for most vegans. Make your own pasta by choosing from six different noodles and two different sauces.

Note: The Gluten-Free Rotini is vegetarian but NOT vegan, as it contains egg.

The Raspberry Sauce used for desserts is vegan… But I’m not sure what you’d put in on. All the other desserts contain dairy products.

Here are some of the typical vegan drinks they’ll have:

The potential “trick” menu items for vegans at Olive Garden would be:

What Oil Does Olive Garden Cook With?

The after-dinner chocolate mints at Olive Garden are not vegan. They are a custom version of the Andes chocolates, which contain nonfat milk, lactose, and milk protein. (source)

And the chocolate sauce for the zeppoli is not vegan, either. It contains dairy.

Is the Zeppoli at Olive Garden Vegan?

The zeppoli at Olive Garden is not vegan, as it contains dairy. Even if you get it without sauce, the dough itself contains dairy. However, the raspberry sauce is vegan, if you want to get that separately for some reason.

None of the Olive Garden ravioli dishes are vegan. They all contain dairy and egg, even the “Creamy Mushroom Ravioli.”

Olive Garden’s Famous House Salad is vegan if you order it without croutons and switch the dressing to “Oil and Vinegar.”

You can get extra virgin olive oil and balsamic vinegar (“Oil and Vinegar”) for your salad at Olive Garden. There are not likely to be any other vegan salad dressings available, but you can ask.

Is There Vegan Soup at Olive Garden?

Olive Garden has one vegan soup—the Minestrone Soup. None of the other soups can be ordered vegan.

What if you’re not just vegan, but also avoiding processed foods? Can you get a strict whole-food plant-based (WFPB) meal at Olive Garden?

For a salad, you could get the Famous House Salad without croutons or dressing. Then ask if maybe you can get the Balsamic Vinegar separate, and just add that without any olive oil.

You can also definitely get the Steamed Broccoli. Nothing sketchy about that—although it’s not too exciting, either.

I’m guessing the Minestrone Soup is not 100% WFPB, as it probably contains white flour in the pasta, and likely some oil in the soup, too. But it would be a pretty healthy option compared to the breadsticks or pasta.

I don’t see any WFPB pasta options. They’re likely all made from processed white flour. But you can ask if there are whole-wheat pastas available at your location.

Keep in mind that the marinara sauce likely contains a bit of oil—but they also list Tomato Sauce as an option, so that may be oil-free.