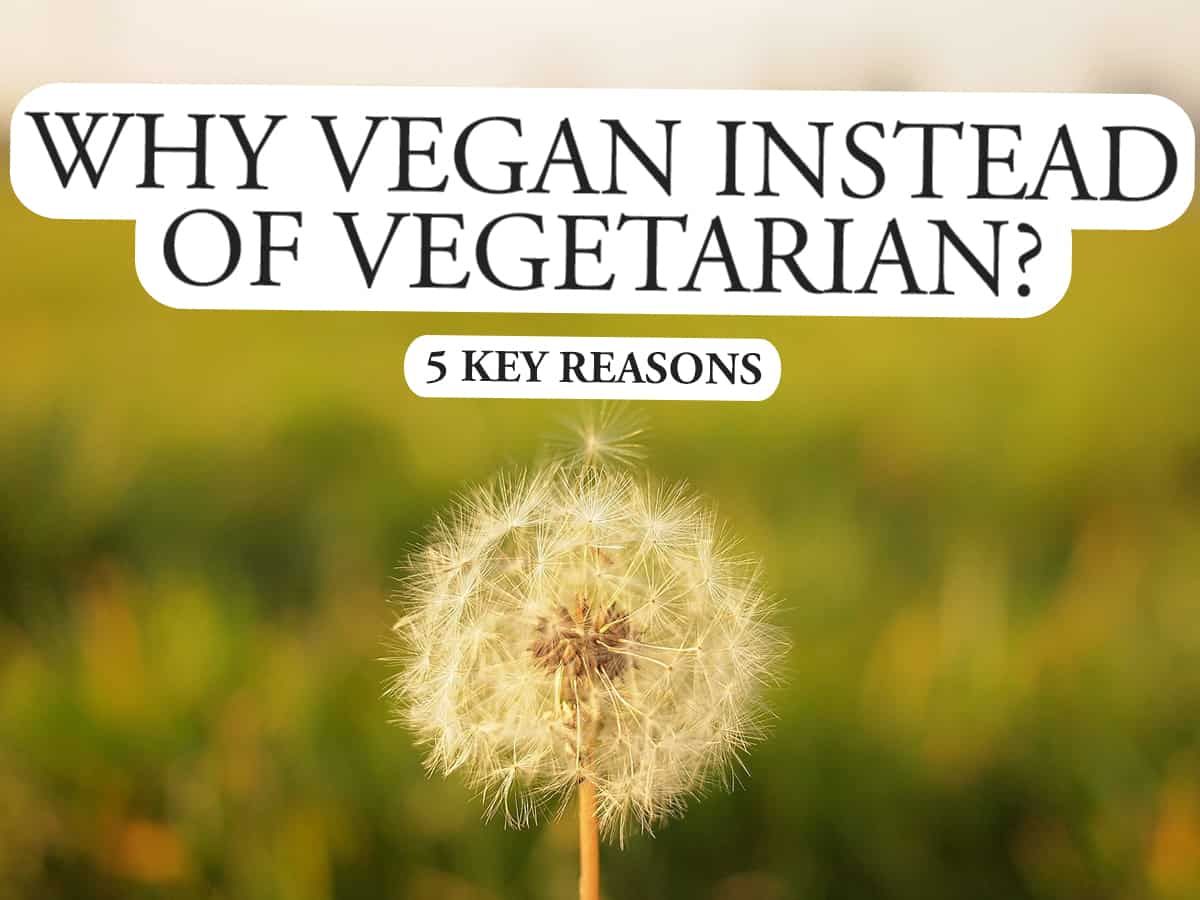 So, you’re thinking you want to stop eating meat, but you’re not sure how far you want to go: vegan or just vegetarian? Personally, I was vegetarian for two years before I went vegan—and I’ve now been vegan for 14 years. So I have some perspective on both!

Here are five reasons to go vegan instead of vegetarian:

I’ll dig into each of these in detail below. Before I get into the list, I’ll also define the terms “vegetarian,” “vegan,” and “plant-based,” just to give a full view of the landscape.

The word “vegan” was coined by Donald Watson, founder of the Vegan Society, in 1944, because the abbreviated word took both “the beginning and the end of ‘vegetarian.'”

“Vegan” can also carry associations with the ethical view that humans should not use other animals because we can never get their consent.

Vegans often boycott animal-based clothing and animal circuses or zoos as a rule, too. You won’t see that behavior from most vegetarians. That said, there are plenty of examples of non-vegans, including celebrities, who do a lot for animal rights across the board.

In recent years, the term “plant-based” has become a lot more common, too. Usually, it is used to describe vegans or near-vegans who don’t necessarily ascribe to the vegan philosophy. People who might be called “health vegans” often just call themselves “plant-based” now.

“Plant-based” also suggests that the diet is based around whole plant foods. A vegan diet could technically consist of beer and potato chips, but such a diet wouldn’t likely be called “plant-based.”

When the word “vegetarian” is used in contrast to “vegan,” you will sometimes hear the term “lact-ovo vegetarian.” A lacto-ovo vegetarian is a vegetarian who still eats dairy and eggs.

5 Reasons to Be Vegan, Not Just Vegetarian

The rest of this article will be explaining why you might choose to be vegan (or fully plant-based) instead of lacto-ovo vegetarian.

1. Separation of mother and calf in the dairy industry.

Personally, I actually find the dairy industry to be sadder and more upsetting than the meat industry because of the routine separation of mother cows and baby calves.

The typical cycle for a dairy cow is to be impregnated every so often, so she will have another calf and start producing more milk again.

But the calf can’t have too much of the milk. That milk needs to be collected to be sold to humans. So the calf is taken away from the mother within a few minutes, hours, or days.

If you watch the videos of calves being taken away from their mothers, you might agree that it’s one of the saddest things that happens in animal agriculture.

Mother cows are known to mourn the loss of their babies for some time. That distress and family separation is one of the big reasons to go vegan instead of just vegetarian.

Preparing for this article, I actually found this video, too, which was made by someone in the dairy industry to defend calf separation. That video argues that early calf separation, within the first few hours, is actually a good thing—because there will be less of a strong bond between mother and calf compared to if they were separated later.

It’s a funny argument to make because the obvious vegan response would be, just don’t separate them at all.

2. Cruel practices in the egg industry.

The egg industry is known for a whole host of cruel practices. It was actually watching a video about the egg industry that first convinced me to go vegan instead of just staying vegetarian.

First, there’s the crowding. Battery cages are known to be an extreme example of this crowding: Several hens are stuffed into a small cage together. The space confinement is extreme, and you can tell from looking at pictures of these mostly featherless birds that it is not a healthy situation.

Battery cages are being outlawed in certain places. But unfortunately, cage-free and free-range egg farms can also have extreme crowding.

If you look at pictures from cage-free or free-range egg farms, you’ll often see thousands upon thousands of birds filling a shed. Sometimes you can barely see the floor because they are packed so tightly together.

Because these birds are agitated, they often peck and injure each other. Which leads to the next point: Debeaking.

Because of the distressing conditions on so many egg farms, the hens are often debeaked when they’re very young so they can’t harm each other as much. Their beaks are seared off with a hot blade. This is why the beaks look strange in so many pictures you’ll see from egg farms.

Lastly, since male chicks are worthless to the egg industry, they are often killed shortly after birth.

On these egg farms, certain workers will have the job of separating the newborn male chicks from female chicks, and the male chicks will be ground up alive or suffocated in trash bags.

That last detail is horrifying enough for many people decide to be vegan instead of vegetarian based on that alone.

Of course, not all egg farms are this bad. And some people even raise chickens in their backyard. Some vegans will still have issues with that—especially if the chickens are killed at some point—but undeniably, there are fewer objections to be made about those operations.

When looking at the health impact of a vegan diet versus a vegetarian diet, you can get some added benefits by going vegan. Saturated fat and its effect on cholesterol is potentially a big one.

Here is a page from the American Heart Association explaining more about the negative health impact of saturated fat.

Plant foods, on the other hand, rarely contain much saturated fat at all. Nuts, avocados, and other plant sources of fat are typically monounsaturated or polyunsaturated fats.

The only big sources of saturated fat in a typical vegan diet are coconut oil and palm oil. So consider watching your intake of those tropical oils for maximum health benefit on a vegan diet.

You don’t need to go vegan in order to lose weight—but it can help!

If you look at studies of body mass index (BMI) for vegans, vegetarians, pescatarians, and meat-eaters, you’ll notice vegans have the lowest BMI, the only group that lands in the “normal” category.

So, yes, lacto-ovo vegetarians have a weight-loss advantage over meat-eaters, but vegans do appear to have a further benefit, as the vegetarians were still in the overweight category.

Part of the same study linked above, the enormous Oxford EPIC study, also found that vegans gained less weight as they aged compared to vegetarians. Why might this be the case?

Animal foods tend to be very rich in calories. Meat, eggs, and dairy all tend to include a lot of fat, which is very calorie-dense. (Fat has 9 calories per gram, compared to 4 calories per gram in protein and carbs.)

If you want to lose weight, it helps to eat more fiber and water because those food components add bulk and fill your stomach without adding calories. Many vegan foods like whole grains, vegetables, and fruits are high in fiber and water.

Of course, you can eat more of these healthy foods while still being a meat-eater or vegetarian… But if you’re just looking at the stats, vegans just land in that healthy BMI range more often.

5. Being more ethically and philosophically consistent.

Many people go vegetarian because they believe something about eating meat is wrong. But most of those reasons also apply to eating dairy or eggs.

If you think eating meat is wrong due to the environmental impact, well, most of the common ways of farming dairy and eggs today are also environmentally unsustainable.

If you think eating meat is wrong because of killing innocent animals, well, egg-laying hens and milking cows are typically killed when they’re no longer productive enough to be profitable. Not to mention that the dairy industry is connected to the veal industry, which kills baby cows.

Aligning Your Actions With Your Beliefs as a Vegan

Many vegans have an ethical view that humans shouldn’t use other animals without their consent. It can be satisfying to align your behavior with a specific philosophical view like this and try to be consistent.

People who go vegetarian instead of vegan usually don’t have as much of a logically consistent philosophy behind it. Many of them end up going vegan eventually because they want to be able to defend their position logically.

But I should note that even the most logically thought-out vegan positions may have inconsistencies. This is because we live in the real world and we all make compromises.

Animal use is tied up into so many industries and so many parts of our society—so even vegans usually have to do things that don’t seem 100% ethically consistent. You need to be flexible to reality.

But with veganism, you may get closer to fully living your values than with vegetarianism.

Choosing Between Vegetarian and Vegan

Many people start by going vegetarian, then eventually go vegan because of some of the reasons listed above.

But if you already know you believe in going vegan and you want to take that step, go ahead and look into it and make it happen! There’s no rule that you have to dabble around with vegetarianism before you go fully vegan.

Whatever you choose, listen to yourself and look at the evidence.

Hear out different arguments and try not to judge or dismiss people. See different perspectives and then try to choose the path that aligns with what you truly believe.