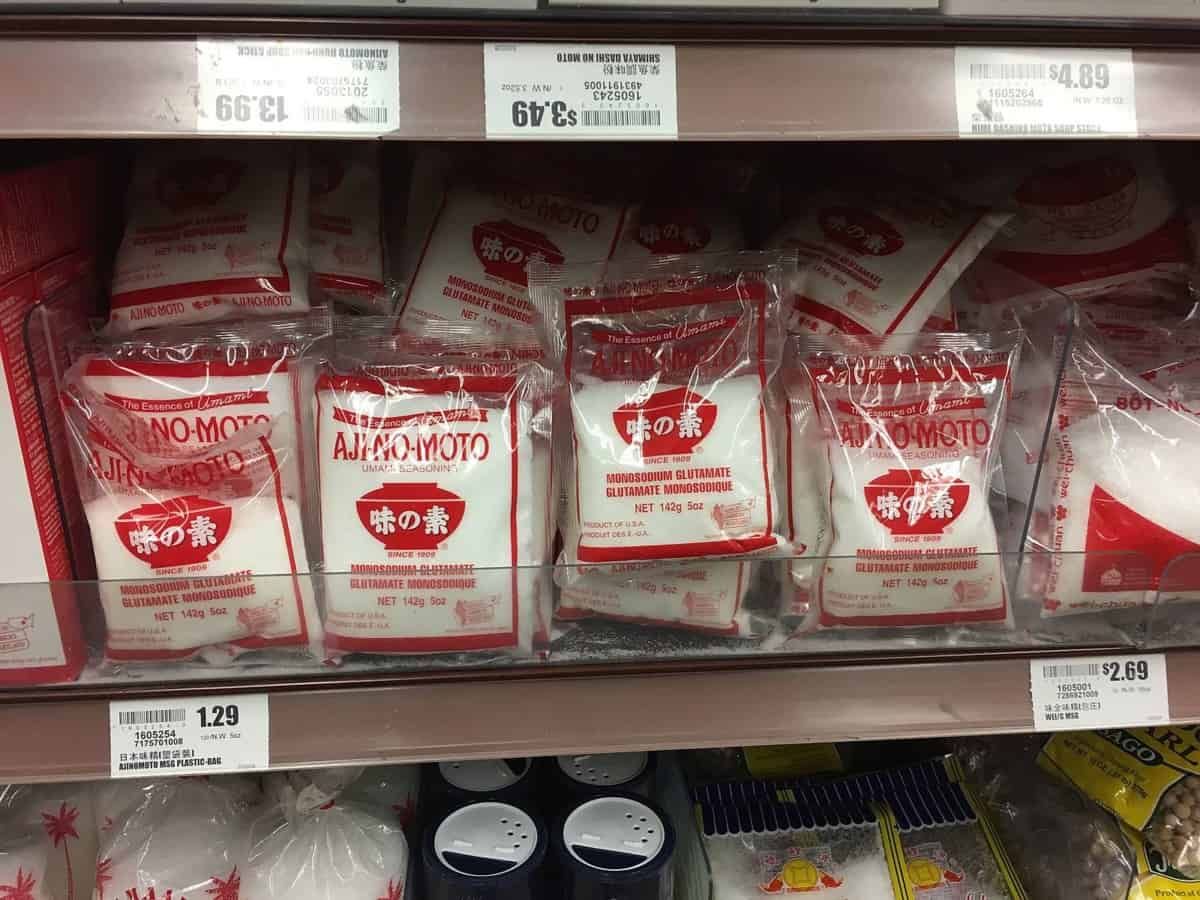 I was at a friend’s house recently, and I noticed he had a big shaker of MSG (monosodium glutamate) in his kitchen. I asked him about it, and he said it’s great stuff. So I started wondering what it actually is, and if I could have it as a vegan.

So, is MSG vegan? Monosodium glutamate, or MSG, is considered vegan. It contains no animal products, and animals are not used in its production. Furthermore, MSG is one of the best vegan sources of umami, the fifth taste.

Since MSG’s vegan status is actually a very simple “yes,” in this article I’ll explore more of the safety side of MSG. I’ll lay out the evidence for why it’s actually safe to eat, and why you might add it to your vegan diet!

Although MSG is vegan, some maybe be scared to eat it. MSG has been under a huge spotlight over the last few years. It’s long been shrouded in controversy, viewed as a shady, weird, toxic compound.

There’ve been claims that it leads to potential brain damage if consumed regularly.

It’s also been speculated that MSG consumption may cause other horrifying consequences, ranging from metabolic disorders to obesity.

MSG stands for Monosodium Glutamate, a compound that’s the product of bonding between a single sodium ion and an amino acid called glutamic acid.

Glutamic acid is a naturally occurring amino acid in the human body, and it’s also present in numerous foods, as well as some food additives.

Sodium, well, who doesn’t know sodium? Sodium is the guy that binds with chlorine forming NaCl, or in other words, table salt.

MSG itself also occurs naturally in many foods, such as tomatoes, parmesan cheese, and most notably, seaweed broth.

However, as MSG is now mass-produced, it’s no longer extracted from foods, rather it’s been manufactured through the process of fermenting starches, sugar beets, sugar cane, or molasses.

Is MSG Safe to Eat?

Yes, MSG is safe to consume. In fact, a big portion of Japanese cuisine is extremely dependent on MSG, as it induces the umami taste.

What’s umami? Let me brief you on it.

Umami: The Reason for MSG

Umami is the 5th taste, aside from sweet, sour, bitter, and salty.

Umami is a taste you likely experience on a daily basis. It’s a brothy, savory, meaty taste, but it’s not only present in meat! Vegan sources of umami include miso paste, nutritional yeast, marmite, mushrooms, balsamic vinegar, and sauerkraut... and MSG!

In 1908, a Japanese professor named Kikunae Ikeda was the first to identify the umami taste in a dish famous within the Asian community—seaweed broth—which is rich in glutamate.

He then identified that MSG was the ingredient responsible for the delivery of that umami taste, which prompted Ikeda to file a patent to produce MSG commercially.

MSG is totally safe for consumption. It’s been approved by the FDA as GRAS, which stands for “generally safe to eat.”

Does the “Glutamate” in MSG Mean That It Contains Gluten?

Monosodium glutamate (MSG) does not contain gluten. Gluten isn’t related to glutamate at all. Both are entirely different components.

Soy sauce, for instance, contains both MSG and whey, so people having celiac disease (or gluten sensitivity) would react to the whey present, but the MSG is not the problem.

For the Muslims out there: Yes! MSG is halal, as it doesn’t contain pork nor animal products. It’s been completely vegetarian-based ever since it’s been mass-produced.

Related: See my article on whether all vegan food is halal—it’s interesting to note the exact differences!

On its own, MSG doesn’t have any taste. Rather, it’s used as a flavor enhancer.

MSG is technically umami plus salt (the sodium ion present)—but then it dissolves, unleashing the desired umami taste.

Is MSG an Excitotoxin?

And what is an excitotoxin, exactly?

The glutamic acid in MSG also happens to be a neurotransmitter—it excites nerve cells in order to relay their signals. It would indeed be quite dangerous if consumed in large amounts.

Therefore, people theorized that MSG would cause excessive nerve cell stimulation if consumed in big portions, therefore branding it as an excitotoxin.

Another cause of fear about MSG dates back to 1969 when a study concluded that injecting large doses of MSG into rats caused adverse neurological issues.

It’s true that injecting massive doses of MSG increased blood levels of glutamate to a shocking 556%. But ultimately, dietary MSG cannot cause adverse effects on your health.

This is because the glutamic acid you get from MSG can’t cross the blood-brain barrier, even if consumed in large amounts. So it can’t get into your brain to mess things up in there.

MSG has been stigmatized for decades. However, MSG is generally safe. If you personally react adversely to MSG, you may be sensitive to it, so it’d be best to stop it. But for most people, MSG is fine to consume.

As MSG contains sodium, it isn’t a good candidate to consume on a daily basis for people with high blood pressure or people with diabetes. It’s like salt in that regard.

MSG, like any other component on this planet, must be consumed in moderation. The entire Chinese and Japanese population are living proof that MSG consumption in moderation is okay.

And MSG is definitely vegan—so don’t worry about the involvement of animal products in the slightest!