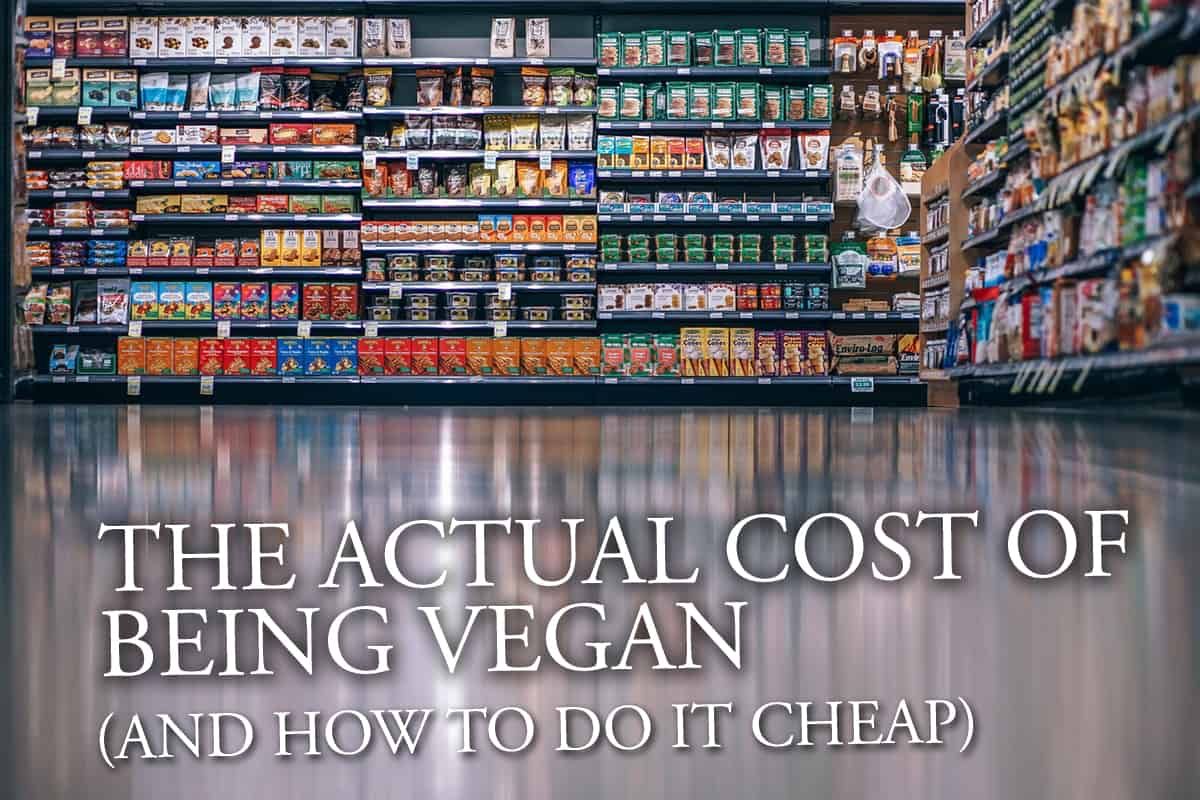 In my years of being vegan, I’ve heard many people say that going vegan would be too expensive for them. Interestingly, I’ve also heard financial advice about how going vegan can be a way to save money. So which is it?

How much does it cost to be vegan? The cost of being vegan depends on how you do it. I eat a cheap vegan diet for about $200 or $250 per month. But some vegans spend double that or more. Eating at restaurants and eating specialty vegan foods like mock meats can raise the costs significantly.

If you’re trying to figure out if you can afford to go vegan, or if you’re already vegan and trying to save more money, this post will help! I’ll outline how I eat vegan cheaply, and which variables affect how affordable your vegan diet will be.

The Cost of My Personal Vegan Diet, Broken Down

I live in a household of two adults. We share groceries, and we stock up on groceries about once every two weeks from the large grocery store nearby.

Usually, our grocery bill for two weeks of food for the house is about $250. So each month we spend about $500 on groceries as a household. Split between us, that’s $250 per person.

How Is My Vegan Diet So Cheap?

At $250 per month, some people may think my diet is quite cheap. What makes my vegan diet so cheap, even while some people say it’s too expensive to be vegan? Here are some reasons:

How I Could Make My Vegan Diet Even Cheaper

Many people would already say I’m eating very frugally. But if I really wanted to live on as little money as possible, there are still many ways I could make it cheaper yet.

In fact, I went through a phase a few years ago where I became fascinated by simple living, and I tried to live as frugally as possible. During that period, I remember living on about $80 per month for food.

Here are some ideas for how I could save even more money on my diet if I wanted to, compared to the $200/month vegan diet I currently have. I could:

Does It Cost More to Eat Out as a Vegan?

Personally, I don’t eat out at all lately—I’d rather save money by eating at home—so my usual expense for restaurants is $0 per month. But in the past, I’ve eaten at dozens if not hundreds of vegan-friendly restaurants, as I often eat out while traveling and exploring new cities.

The first thing to remember is that there are vegan options at many different kinds of restaurants. You don’t necessarily need to go to a “vegan restaurant” to eat great vegan food at a restaurant. Consider these options:

So you don’t need to seek out an all-vegan or all-vegetarian restaurant all the time. And the cost of eating vegan at these restaurants will often be the same as eating meat dishes at them.

Guide to Eating Vegan at Restaurants: The most awesome and helpful resource I’ve found for eating vegan at restaurants is actually just included as a bonus in the Vegan Starter Kit from Nutriciously (that’s a link to my full review of the starter kit).

They cover how to order vegan at different kinds of restaurants—like Italian or Japanese restaurants—and they also include popular chain restaurants like Domino’s or Jack in the Box.

And that restaurant guide is just one of the bonuses included in their overall vegan starter kit. You also get grocery lists, meal planning tips, recipes, and more! Check it out here. Or read my full review here.

What About the Costs at Fully Vegan Restaurants?

Overall, I don’t think eating out as a vegan is more expensive than as a non-vegan. In my experience, it hasn’t been—even if you eat at all-vegan restaurants. The meals are usually just around $10-15.

You can use Yelp to find vegan-friendly restaurants, or another great app is Happy Cow. The website is free to browse at HappyCow.net. The mobile app is a couple of dollars, and it’s absolutely worth it.

Is It More Expensive to Buy Vegan Clothes and Shoes?

For most people, going vegan doesn’t only mean changing their diet—it also means not buying clothes made with leather, wool, silk, goose down, or other animal products.

So, does going vegan raise your clothing costs? Again, it depends on the specific choices you make—but it doesn’t have to.

I spend very little on clothing as a vegan. That said, if you have an addiction to buying new vegan shoes every week, it could add up!

Leather is generally considered to be high-quality, so real leather options are often more expensive than the vegan, man-made clothing options. This same rule applies to fur, wool, silk, and down. The “fake,” man-made, vegan versions are usually more affordable.

A related question: Is vegan leather as durable as real leather? I wrote a full post on that question here.

For a few years, I was in the habit of buying cheap canvas sneakers in the style of Converse Chuck Taylors (that’s an Amazon link). Those simple canvas shoes are vegan, stylish/classic, and quite cheap.

Finding “accidentally vegan” options by established brands is usually the best way to find affordable, quality vegan shoes and clothes. You can find guides online to each category of clothes. See my guides for vegan sneakers, vegan Timberlands, or vegan belts.

Shop around! One of the options I frequently use when buying clothes is to buy from thrift stores. You can usually find unique clothes for a very low price.

Vegans debate about whether it’s okay to buy used leather as a vegan. I personally think it is okay to buy second-hand leather and animal products. Here’s why: it doesn’t support the company that originally made this non-vegan product. You’re just putting it to good use now that it exists anyway.

Can It Be Cheap and Convenient to Be Vegan?

Eating the cheapest meals at home, such as beans and rice, can require time to prepare. Some people are not accustomed to cooking at home, and they may not feel they have time to do it regularly.

One of the most difficult transitions to veganism may be for someone who is accustomed to eating from fast-food restaurants and gas station food all the time. From there, switching to a vegan diet will likely either be more expensive or it’s going to take more time to prepare your food. Maybe both.

One of the cheap vegan meals I eat almost every day is oatmeal. I cook mine in the microwave in about 5 minutes.

You can even buy “quick oats” that cook in 3 minutes in the microwave. Add some fruit. Maybe sprinkle on some cinnamon. That’s a cheap, convenient, and healthy meal!

One of the best tips for making a cheap vegan diet convenient is to batch-cook several meals for the week at once.

Sometimes, I’ll spend an hour on Sunday cooking a big batch of soup or stew for the whole week. Then I’ll load it into 5 different Tupperware containers, and I’ll have soup leftovers for 5 different meals throughout the week. You can even freeze the containers and spread them out over a longer period.

You can do the same thing with beans-and-rice dishes. Cook up a big batch of rice on the weekend, and store it in the fridge to reheat all week long. Or mix in the beans or vegetables, and then store it in the refrigerator as a complete meal ready to eat after heating.

More Questions on the Costs of a Vegan Diet:

How much does a vegan diet cost monthly? My grocery bill is about $250 per month to feed myself. But that’s just one example. You can spend much more (or less) depending on the foods you eat. In the past, I’ve eaten more expensive and less expensive vegan diets.

Finding an Affordable Vegan Diet That Works for You

Finding your own affordable version of a vegan diet will be different for everybody. We all like different foods, have access to different stores, and have different challenges as far as time and money.

Over time, you can figure out the meals you love to eat regularly that are cheap and easy. Go into it with a mindset of optimization: The diet you start with as a new vegan is not necessarily what you need to stick with.

There are millions of ways to eat vegan. So make adjustments to your diet over time to improve it again and again.Try many different kinds of meals, and only keep what works. Find the affordable, easy vegan diet that works with your life.

If you found this post helpful and don’t want to ever lose it, save the Pin below to your Pinterest “Going Vegan” or “Vegan on a Budget” board!