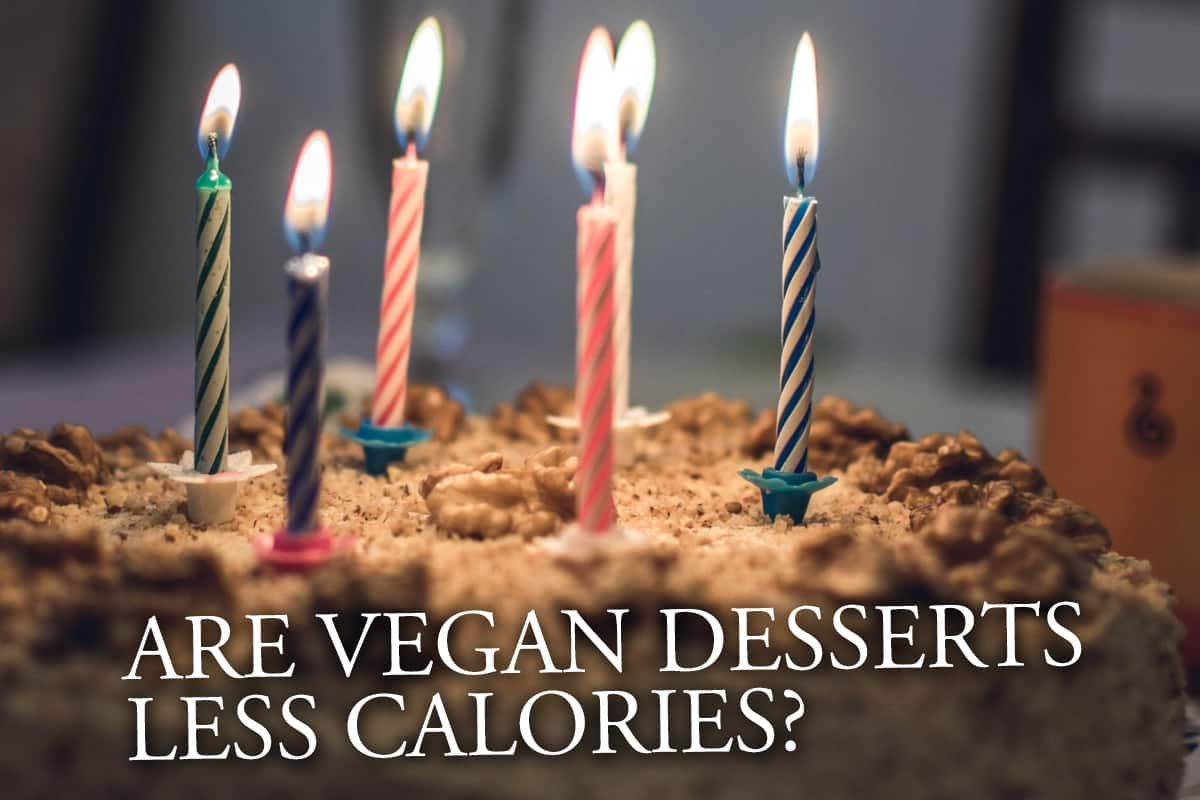 A common assumption is that vegan desserts are healthier and lower in calories compared to desserts made with dairy and animal products. As someone who’s been vegan for many years and has watched my calories at times, I have a lot of first-hand knowledge about vegan desserts and their calorie counts.

Typically, a vegan diet can help you eat lower in calories and lose weight without even trying. But as I’ll explain below, this is not always the case. It depends on which specific foods you eat. The same goes for getting long-term health from your vegan diet. It all depends on the specific foods.

The most common vegan desserts you see, whether they’re homemade raw vegan desserts made from whole foods or store-bought processed junk, still include very rich, high-calorie ingredients. So if decreasing your calories and losing weight is your goal, you should be aware of this.

This is common sense if you think about some of the “accidentally vegan” junk foods such as Oreos and Nutter Butter cookies. Nobody would assume that those cookies are lower in calories, even though they are vegan. They’re loaded with processed oil and sugar.

In raw vegan desserts, the ingredients are healthier and less processed, but they’re still high in calories. Nuts, seeds, and nut/seed butters are some of the highest-calorie foods because they’re very high in fat. Same goes for avocado, coconut oil, and olive oil.

Personally, peanut butter is the healthy vegan food that racks up calories for me. At about 100 calories per tablespoon, the calories add up fast with peanut butter, even if it’s a “natural” version of peanut butter that’s just made from peanuts.

Dried fruits can also pack a lot of calories in a small space because so much of the water has been removed. Any time you remove water and/or fiber from a food, you’re removing calorie-free parts of the food that help fill you up. So the caloric density goes up.

Vegan, Low-Calorie, and Healthy All Mean Different Things—But They Do Overlap

Remember that these terms are all independent from each other.

• Vegan doesn’t always mean healthy. You could eat Coca-Cola and Frosted Flakes all day on a vegan diet. Not healthy.

• Low-calorie doesn’t always mean healthy. You could eat Diet Coke and some sugar-free dessert, stop yourself when you reach a certain number of calories. Not healthy.

• Healthy doesn’t always mean low-calorie. You could eat whole foods like avocado and nuts, or big servings of whole grains and fruit, and you could still gain weight if you eat enough. Not low calorie.

Eating vegan matters if you care about helping animals or the environment. Typically it will also lead you to make healthier, lower-calorie choices—but not always.

Eating healthfully matters if you care about your long-term health. Usually, pursuing health will probably lead you to more vegan, low-calorie options—but not always.

Eating low-calorie matters if you care about weight loss. Choosing low-calorie foods can overlap a lot with choosing vegan, healthy options—but it doesn’t have to.

Do you see how these can all be goals that support each other, but they are actually separate, when you get into the details? One does not imply the others.

How to Make Your Vegan Desserts Lower in Calories

The following are two overarching tips that will help you find low-calorie vegan dessert options and tweak your existing desserts to be lower in calories.

To make your vegan desserts lower in calories, you want to make sure you’re not removing water or fiber from the foods. When foods are processed, the fiber and water weight is often lost, making the same amount of calories much less filling.

We all know that we can chug down a big glass of orange juice pretty quickly and easily. But it would take us much longer to eat 5 whole oranges. And the fiber from the oranges would fill you up a lot more than orange juice if you did.

So one key to making low-calorie vegan desserts is to keep foods in their whole form. Just eating whole fruit is one simple vegan dessert. Another option is making smoothies with fruit. Smoothies include the original fiber, although it is blended up—the fiber is not removed like it is during juicing.

Note: Smoothies can still lead you to consume excess calories just because of how quickly you’re able to drink them. So you might want to pace yourself. Sip the smoothie over the course of 20-40 minutes rather than chugging it down. That will allow your stomach to better register fullness from it.

The How Not to Die Cookbook has some healthy vegan desserts, and one technique they use to achieve this is to make “date syrup.” You simply soak dates in hot water for an hour, then blend them up (with the same water). The result is a sweet syrup you can add to many recipes as a sweetener. Since it keeps the fiber and water, it’s not quite as calorie-rich as other sweeteners.

As mentioned above, fat is 9 calories per gram, compared to the 4 calories per gram in carbohydrates and protein. So if you’re set on having a lower-calorie vegan dessert, consider removing some of the nuts, seeds, avocado, oils, or other high-fat ingredients.

The counter-argument I’ll mention to this point is that some people feel that fats help them feel satiated more than just eating all carbohydrates. So maybe you still want to include some healthy fats. But just be aware that they can add calories pretty quickly.

Please remember: Most people agree that nuts and avocado are very healthy to include in your diet. All I’m saying is that they will add calories to your dessert more quickly than carbohydrates or protein. So if you need to lose weight, don’t go overboard with these “healthy fats.”

One of My Favorite Homemade Low-Calorie Vegan Desserts

One of my favorite low-calorie vegan desserts is fruit popsicles made with real fruit at home. This is really simple and something you can enjoy all the time in the summer. The one-sentence explanation is just this: Make a fruit smoothie, then pour it into a popsicle mold in your freezer. A few hours later, you’ve got a healthy fruit popsicle!

You can explore so many different flavors with this. Ripe bananas are usually going to be the base of a good creamy smoothie, but you could add some other fruits for flavor, you could add some cocoa powder and cinnamon (or vanilla!), or you could add PB2, the low-fat peanut butter powder available at most grocery stores.

You can also try different fruits just blended up with water or plant-based milk. Or just blend up chunks of watermelon, and then freeze that into popsicles. It’s just healthy fruit in any case, but the popsicle form makes it more exciting.

If you want to order some popsicle molds right this instant, I would recommend the ones by Zoku. They have a drip guard for when your popsicle starts melting, and they also are BPA-free! Click here to check the current price on Amazon.

Do vegans eat less calories? On average, vegans do eat less calories. Plant-based foods tend to include more water and fiber, which makes it easier to feel full on less calories. But vegans can still eat higher in calories and gain weight depending on the specifics of their diet.

Finding healthy desserts to enjoy on your vegan diet can be very exciting. It can feel like you’re getting away with a big secret or cheating the system. You’re eating something so sweet and delicious, but it’s not actually many calories—how sneaky!

If you search for low-calorie vegan dessert recipes, there are a ton of delicious-looking options to choose from out there. You can also tweak existing recipes you already know to make them healthier and lower in calories using some of the tips above.