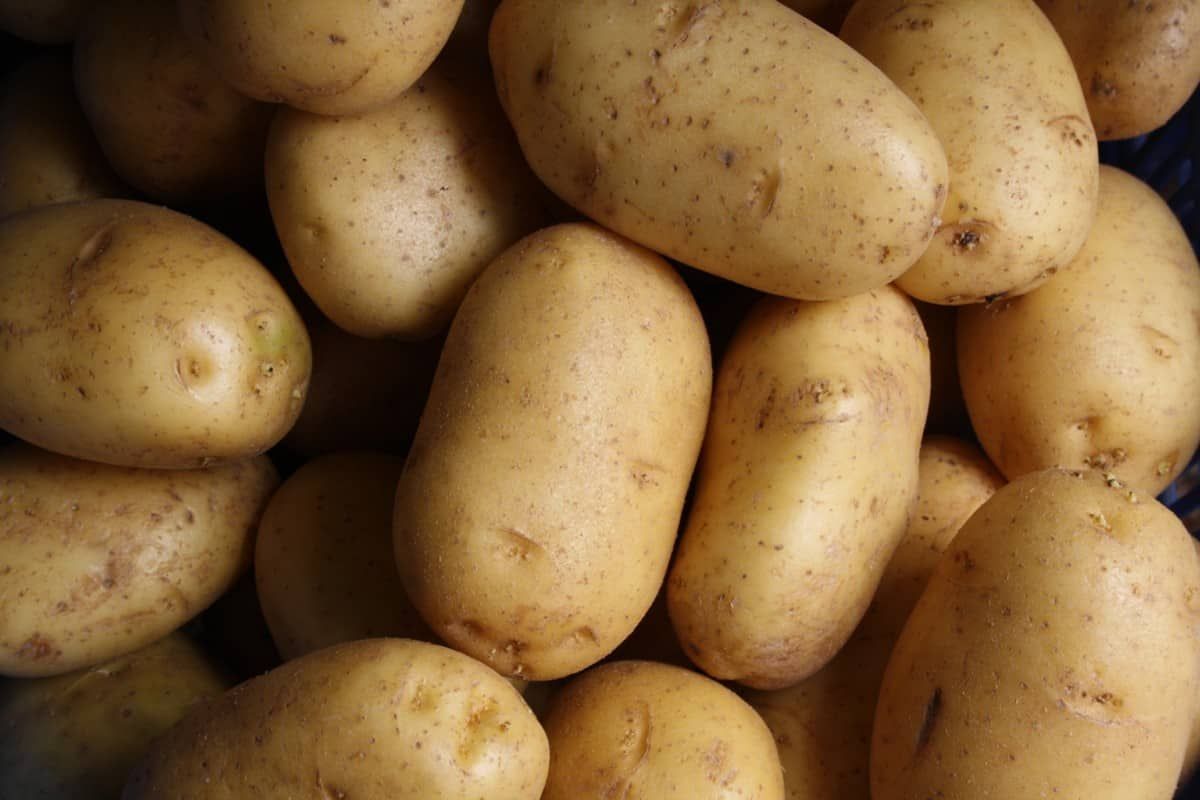 Potatoes have been a staple food for many civilizations around the world. They’re not only cheap and very filling—they’re a comfort food many of us love. But which common potato dishes can you have on a vegan diet?

Are potatoes vegan? Potatoes themselves are vegan. But they are often prepared with cheese, butter, or milk in traditional recipes. Most potato recipes can be made vegan by replacing the animal products with ingredients like soymilk, vegetable oil, or vegetable broth.

Below, I’ll load you up with tons of vegan potato inspiration. You’ll have so many ideas for potato-based meals. If you get to the bottom of the post, you’ll also find some awesome inspiration for losing weight with potatoes on a vegan diet!

All Potato Recipes Can Be Made Vegan

There are many ways to prepare potatoes. But yes, I’d venture to say that all potato recipes can be made vegan just by tweaking a few ingredients.

From fast-food restaurants to Thanksgiving dinner, delicious potato dishes are everywhere, and that doesn’t need to change when you go vegan!

Let’s take a look at some of the most common ways that potatoes are prepared, and what makes them non-vegan traditionally:

And if you’re curious about fried potato products like french fries, hash browns, and chips, I wrote more about vegans and oil in “Can Vegans Eat Fried Food?“

Mashed potatoes are usually not vegan because they’re made with milk and butter. But those animal ingredients aren’t essential. For a vegan version, simply use vegan butter (like Earth Balance) and plant milk (like soymilk), which both can be found in normal grocery stores.

Really, there are many ways you can make mashed potatoes. I usually boil the potatoes in water, drain them, and add some soymilk or almond milk along with salt and pepper while I’m mashing them. Some people have much more advanced recipes.

Here are two great recipes you could check out:

Some boxes of instant potatoes are vegan, but others contain dairy. Look at the end of the ingredients list to check if it says “contains milk.” If not, then it’s vegan. To prepare your vegan instant potatoes, just add water or plant milk to rehydrate them, not dairy milk.

The powder in typical instant potatoes consists of cooked, mashed, and dried potatoes, so it doesn’t inherently include dairy. But some packages do have added milk or butter, so be careful.

For an absolutely delicious brand of instant potatoes, which I can confirm are vegan and which you can buy online, check out Edward & Sons Organic Mashed Potatoes (Amazon link).

When you’re reading the package for instant potatoes, you will also find that there are two recommended options for making them—add milk or water. For vegans, the options are to add plant milk or water.

A lot of people will level up their instant potatoes by adding chicken broth, salt, butter, or sour cream. You can easily substitute these additions with water, vegetable broth, olive oil, vegan butter, salt vegan margarine, or your non-dairy milk as a vegan!

Baked potatoes themselves are vegan. But they’re often prepared and topped with non-vegan ingredients like butter, cheese, sour cream, and even ground beef. To make vegan baked potatoes, simply replace these animal products with vegan toppings instead.

You can also find unique recipes such as this Vegan Breakfast Baked Potato (video below), which is served with vegan sausage and delicious garnishes.

Personally, one way that I love to eat baked potatoes—but maybe this is just my weird quirk—is to eat them as simple cold leftovers out of the fridge. Finger food! It’s satisfying to just bite into a cold baked potato, and it doesn’t require much seasoning at all.

Interestingly, cold potatoes are also quite good for you. This is because some of the starch in a baked potato turns into resistant starch after cooling. Resistant starch is healthy for your gut bacteria and helps keep you full.

Red potatoes, like all potatoes, are vegan by themselves. But they are often prepared with dairy products like butter. To prepare red potatoes as a vegan, simply replace any dairy with alternatives like vegan butter (such as Earth Balance), vegetable oil, or vegetable broth.

Red potatoes are supposedly healthier than yellow or white tomatoes because of the antioxidant pigments in the skins.

Red potatoes can be very easy to prepare. Just toss them in some olive oil and garnish (garlic powder, thyme, parsley, salt, and pepper) and bake them in the oven! Delicious.

Here are two great vegan recipes to try with your red potatoes:

White potatoes, like all potatoes, are vegan by themselves. But they are often traditionally prepared with dairy products like butter. To make white potatoes in a vegan way, replace the dairy with alternatives like vegan butter (Earth Balance), oil, or veggie broth.

Many of the dishes already mentioned above—such as mashed potatoes and baked potatoes—are primarily made with white potatoes.

Another great way to prepare vegan white potatoes is to make them in an oven-roasted recipe like this one. The recipe incorporates rosemary, garlic, and olive oil with some seasoning to bring all the flavors together.

Although a very different flavor from normal potatoes, sweet potatoes are fun to prepare as they have vibrant flavors that come out differently in different forms of cooking.

A lot of common sweet potato recipes focus on brown sugar, maple syrup, and cinnamon, all of which are vegan.

Here are a few great vegan recipes for your sweet potatoes:

Again, although some potato dishes may seem completely non-vegan, think about substitutes such as non-dairy milk, vegan butter, olive oil, and vegan margarine.

Playing with new spices and combinations of vegetables to bring the flavors alive is a great idea, too!

Here are 8 creative vegan potato dishes you might try:

Lastly, I’ll leave you with a few more sources of inspiration for your vegan potato escapades. Check out these three vegans who heavily incorporate potatoes into their diets and share about it online!