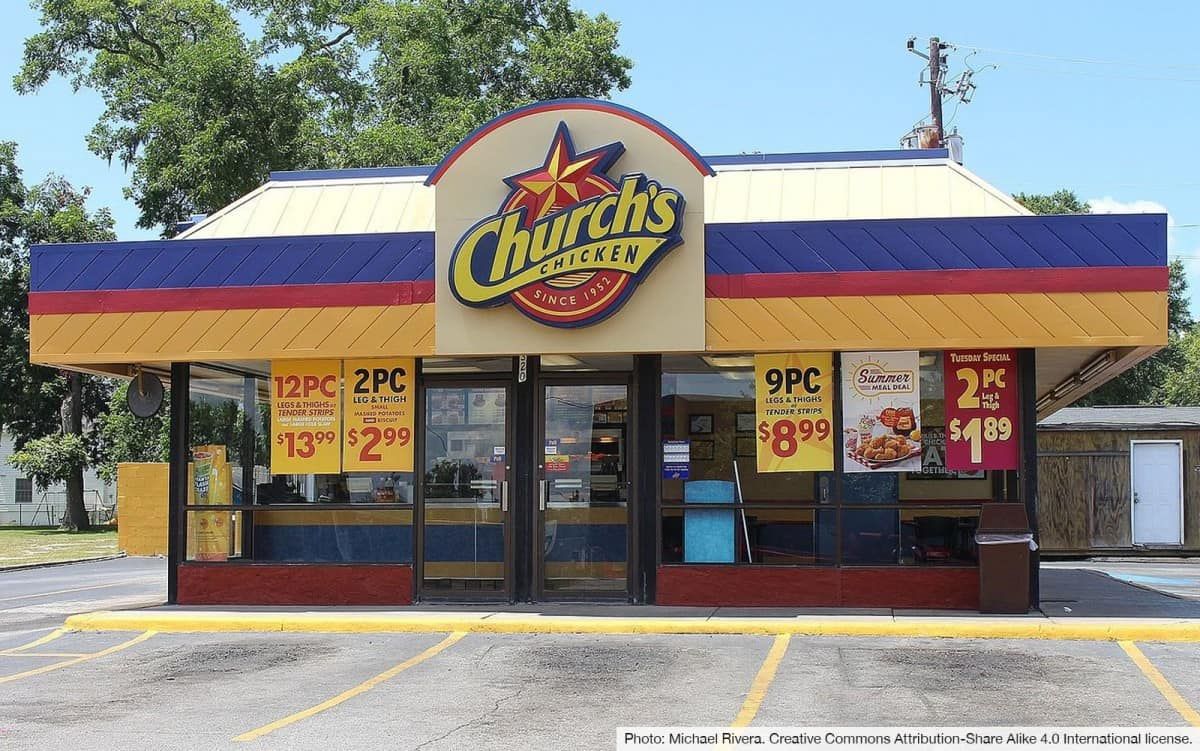 Fried chicken restaurants are typically not great for vegans. That said, Church’s is a bit above average. There’s no vegan chicken—but there are at least five good sides to choose from. Five! So, you can definitely eat your fill.

Below, I’ll share more about the menu items that are surprisingly not vegan. I’ll also answer some common questions, and I’ll end with a look at the whole-food plant-based options at Church’s!

The following vegan menu was compiled with the help of the nutrition and allergen information on the Church’s website.

French fries are the classic fall-back restaurant option for vegans. And they’re a solid choice at Church’s, too. Typically you’ll be getting crinkle-cut fries.

As is typically the case at fast-food restaurants, the fries are likely cooked in a shared fryer with chicken or other animal products. If this concerns you, then ask staff at your local Church’s about the fryer set-up.

2. Corn on the Cob (Without Butter)

The corn at Church’s comes standard with butter, but you can ask to get it dairy-free. Then you’re just munching corn on the cob. Simple and delicious.

Note: The Breakfast Biscuits and Honey-Butter Biscuits are NOT vegan.

These hash browns are on the breakfast menu. But you might be able to get them anytime depending on the location.

You might worry that grits would contain butter or dairy—but Church’s grits are confirmed dairy-free on their allergen menu!

Now this is a simple side. Just some plain jalapeño peppers. Hey, nothing wrong with that.

Pretty much none of the sauces at Church’s Chicken are vegan. Many of them contain honey (Honey BBQ, Honey Mustard, Honey Sauce, and Smoky Honey-Q Sauce). A few also contain dairy or egg.

But the ketchup is vegan, of course. So, at least we have that.

There are lots of drinks to choose from:

Church’s fried okra is not vegan, as it contains dairy in the breading. Unfortunately, this is typically the case when you see fried okra, fried pickles, or fried avocado at restaurants—they use a breading that is not vegan.

The biscuits at Church’s Chicken are not vegan, as they contain dairy. However, the dinner rolls are vegan.

It’s strange how biscuits are almost never vegan at chain restaurants, because you can find some vegan biscuit brands at the store.

Church’s Chicken Apple Pie is not vegan, as it contains dairy. It’s also possible it might contain lard in the crust, as sometimes pie crusts have lard.

What if you’re not just vegan but also trying to avoid processed foods? Can you get a whole-food plant-based (WFPB) meal at Church’s Chicken? Let’s take a look.

As you can see, even though Church’s doesn’t have salad, they still do have WFPB options. These three simple sides all count as WFPB.

The corn and grits are just simple whole grains. And the peppers are just plain and simple veggies, too.

Church’s is one of the better restaurants of its type. That said, if you’re curious about other chicken restaurants and what they offer for vegans, I’ve got the scoop for you: