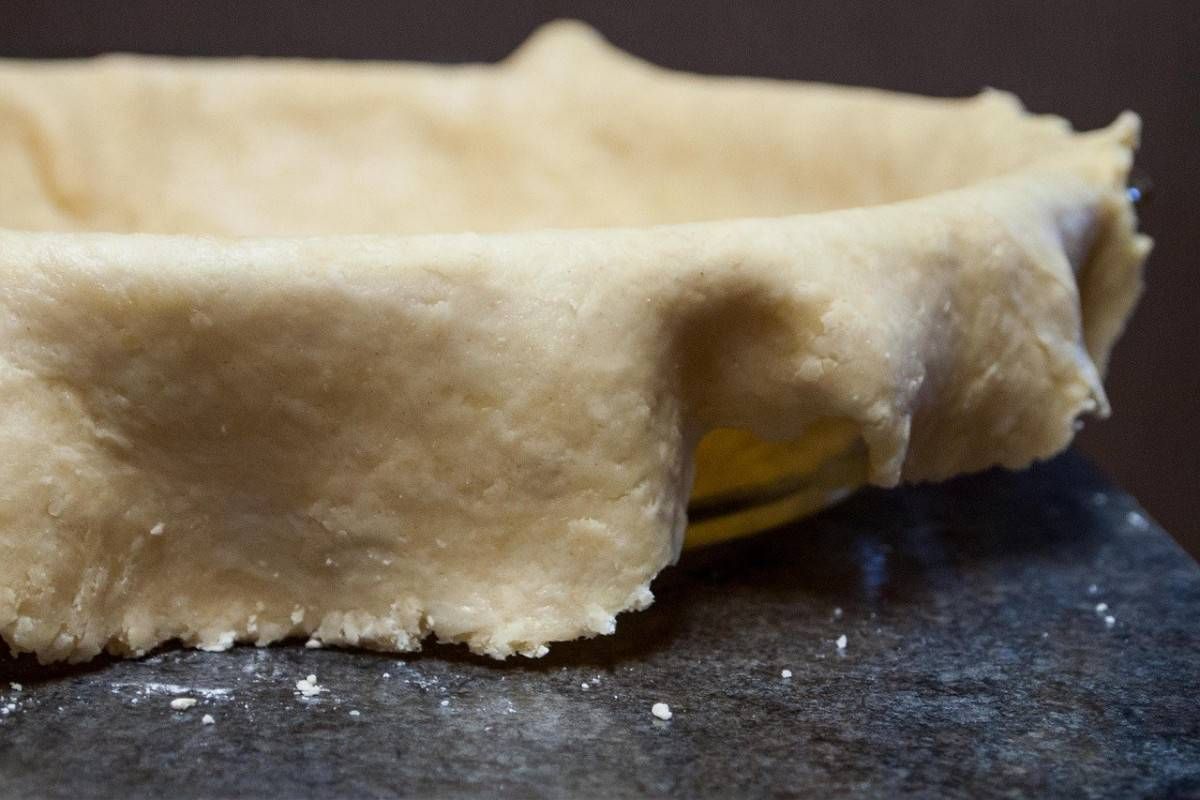 As a young vegan, I learned that pie crusts are sometimes vegan, but sometimes they contain lard. However, I never really dug deeper into the issue until this week. For this post, I’ve analyzed over 50 store-bought pie crusts to really answer the question: Is pie crust vegan?

Out of 53 store-bought pie crust products checked, 31 were vegan, 21 were not vegan, and 1 was unclear. This means 58% of pie crusts were vegan. The most common non-vegan ingredients were lard (13 products), whey (7 products), and honey (3 products). Butter and casein also appeared once each.

Below, I’ll share the full table of pie crust brands and whether they’re vegan. I’ll answer some overall questions about what ingredients and kinds of pie crusts to look for. Then I’ll dig into the details on each brand and exactly which of their crusts are vegan.

Let’s start by getting a bird’s eye view of which brands are vegan. The table below shows the results of my research. It includes frozen pie crusts, refrigerated pie crusts, and pie crust mixes. However, it’s limited to store-bought options. This is not about homemade pie crusts or restaurant options.

When you see “Mixed” in the table below, that means the brand offers at least 1 vegan and 1 non-vegan pie crust. You can click a brand name to skip to the details on that brand below.

Here’s another factor to consider with dairy in pie crust: When you buy a “pie crust mix,” it will typically recommend adding butter to it. However, you can keep the dairy out of your pie crust by just using vegan butter instead.

Lard is just animal fat, and plant-based fat can be used without any compromise in taste or consistency. So many pie crusts use palm oil or shortening like Crisco. Some use soybean oil. So, yes, lard is an ingredient to watch out for—but it’s not nearly in every pie crust.

Overall, this means that graham cracker crusts had a 75% chance to be vegan, which was better than the overall 58% when looking at pie crusts as a whole.

Indeed, I found that multiple brands that use lard or dairy in some of their crusts still offer a fully vegan graham cracker crust, as well. This was the case with Great Value, Kroger, and Wegman’s.

Here’s the full breakdown of the graham cracker crusts I checked:

Which Pie Crust Brands Are Vegan?

Alright, let’s take a detailed look at a bunch of the most popular pie crust brands, and see which ones are vegan!

Belmont pie crust is vegan. It contains no lard, dairy, or other animal-derived ingredients. Specifically, I can confirm this about Belmont Deep Dish Pie Crusts, as well as the pie crusts used for Belmont Apple Pies. I would expect the rest of their crusts to be vegan, too.

Belmont is a store brand sold at Aldi. So this also answers the question “Is Aldi Pie Crust Vegan?” with a resounding “Yes!”

Betty Crocker Pie Crust Mix is not vegan. It contains sodium caseinate, which is a form of the milk protein casein. Here’s the full ingredients list, for context:

Bob’s Red Mill Gluten-Free Pie Crust Mix is generally considered vegan. It contains no lard, dairy, or other animal-derived ingredients. The back of the bag recommends adding butter to the mix. However, you can use vegan butter instead.

Again, here’s the breakdown of each Diamond pie crust flavor:

Here is the full breakdown of the pie crusts I checked from Great Value:

Honey Maid Graham Cracker Pie Crust is not strictly vegan, as it contains honey. That said, it does not contain dairy or lard, so some vegans may be okay with eating it anyway.

It may sound obvious that “Honey Maid” pie crusts would contain honey. But there are many other graham cracker pie crusts that do not contain honey—as well as many “Butter” products that actually don’t contain butter—so it’s worth checking these kinds of things!

I struggled to confirm whether Immaculate pie crusts are vegan or not. I found one product listing on Wal-Mart’s website, which had vegan ingredients. However, I found listings on other websites, including Amazon, that contained “cultured whey” (milk).

And here’s another interesting detail: All of these products were “unavailable” or “out of stock.” And when I checked on the Immaculate Baking website, their “Pie Crusts” page was coming up blank. So I’m not sure if they are actually still making pie crusts or not.

Basically, if you’re getting an Immaculate Pie Crust, check for “cultured whey,” as that’s the non-vegan ingredient I’ve spotted in some of their past product listings.

Jiffy Pie Crust Mix is not vegan. It contains “Animal Shortening,” which includes lard and hydrogenated lard. Here are the full ingredients:

Keebler graham cracker pie crust is generally considered vegan. None of the flavors contain lard, dairy, or other animal products. Interestingly, even the flavors that say they contain “honey-cinnamon graham crackers” do not in fact contain honey in the ingredients.

Here is the full breakdown of flavors and options:

King Arthur Gluten-Free Pie Crust Mix is generally considered vegan. It contains no lard, dairy, or other known animal ingredients. The back of the box will recommend adding butter to the mix. However, you can just use vegan butter instead, as is also noted on the box.

Some Kroger pie crusts are vegan, but others are not. From the crusts I was able to check, the Deep Dish crust contained lard and whey, while the regular Ready-to Bake pie crust had lard. The rest of the flavors were vegan.

Below is a full breakdown of the Kroger pie crusts I was able to check. Keep in mind that it’s possible that some of these products may be out of date or no longer offered. I used a variety of Internet resources to find the ingredients lists for these products.

Marie Callender pie crust is considered vegan. It does not contain lard, milk, or any other animal ingredients. This applies to the separate “Pastry Pie Shells” (pie crust) product, as well as the crust used in the actual Marie Callender pies.

MI-Del pie crusts are generally considered vegan. They do not contain lard, dairy products, or any other animal-derived ingredients.

This applies to all three of the flavors currently listed on their website:

Mrs. Smith pie crusts are generally considered vegan. This includes the Mrs. Smith brand as well as the Oronoque Orchards brand. Both are free of lard, dairy products, and other known animal ingredients.

Here are the exact products I was able to check:

Store-bought OREO pie crust is generally considered vegan. It does not contain lard, dairy products, or any other animal ingredients.

When making OREO pie crust at home, it would depend which recipe you use. Some recipes for OREO pie crusts may use butter or other animal ingredients. However, you can also make OREO pie crust in a vegan way with a recipe like this one.

Here are the ingredients for the store-bought OREO crust:

Since Pillsbury is such a popular brand of pie crusts, let’s answer a couple other relevant questions about their products:

Lastly, here’s the ingredients for the sole vegan pie crust from Pillsbury:

It’s also possible that one or more of these products are outdated or no longer for sale. Be sure to check the ingredients of your specific Publix pie crust for lard. But here’s the breakdown of flavors I checked:

Here’s the full breakdown in a table:

Here’s the full list of Tenderflake pie crusts and why they’re not vegan:

Trader Joe’s pie crust is not vegan, as it contains butter. Here is the full ingredients list for reference:

The normal Wegman’s pie crust is not vegan, as it contains lard. However, the Wegman’s Graham Cracker Pie Crust Shell is fully vegan.

This is not too surprising, actually. Several other brands have this same dynamic, where the normal pie crust contains lard but the graham cracker crust is vegan.

Wewalka Pie Crust is considered vegan. It does not contain lard, dairy, or any other animal-derived ingredients. Here is the full ingredients list:

Wholly Wholesome pie crust is confirmed vegan. In fact, the label reads “Suitable for Vegans” and “Contains No Animal Ingredients” if you look closely. All flavors are free of lard, dairy, and other animal products.

Here’s the full range of pie crust options I found from Wholly Wholesome:

So, just one final question before I finish: Is pie vegan? Well, it often is, but not always. The crust is typically the least-vegan part of a pie, due to how commonly it contains lard or dairy. But if the crust is vegan, often the whole pie is.

As you likely know, many fruit pies are just filled with fruit and sugar, along with seasonings like cinnamon. So, because the filling often doesn’t contain dairy or animal products, it is pretty easy to make a vegan pie: Just choose of the vegan pie crust options shown in this post!