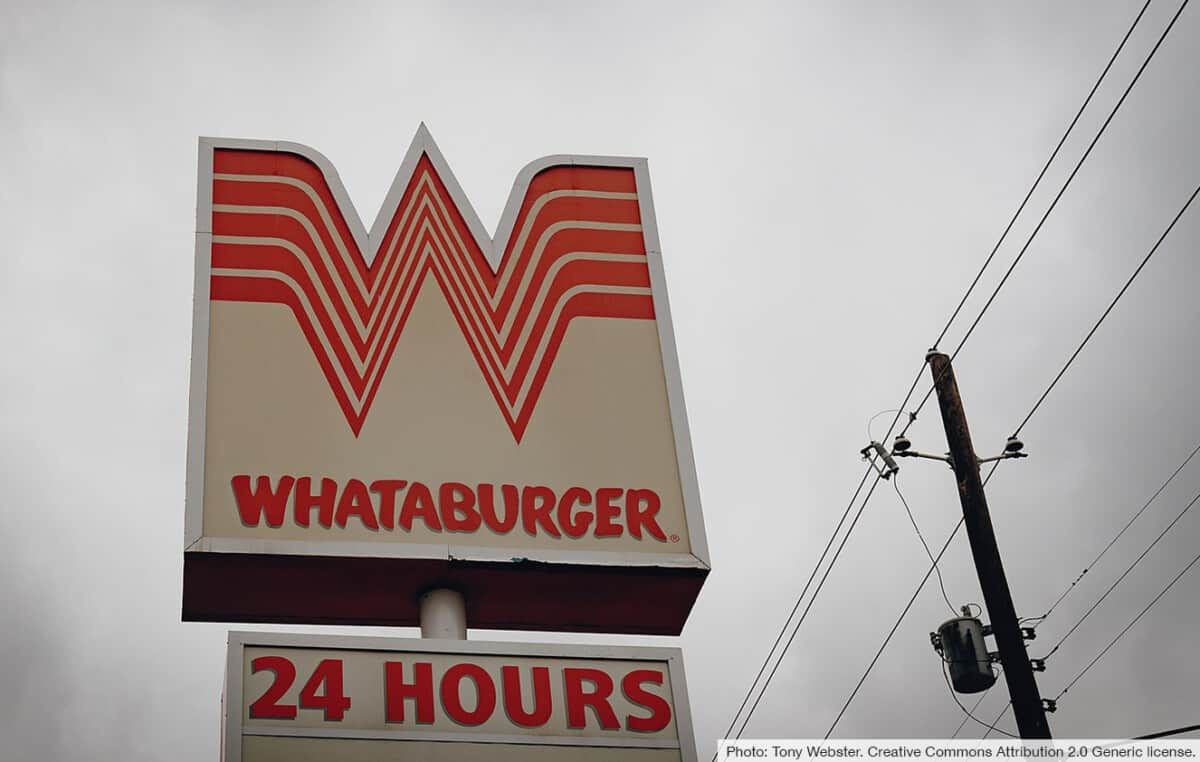 Whataburger is a classic Texas chain restaurant. Although they don’t cater to vegans at all, luckily there are still a few items on the menu you can scrape together into a meal. I’ll show you what I found after reading ingredients lists on the website for a couple of hours.

I’ll end with a whole-food-plant-based guide to Whataburger, too—for those of you avoiding fried and processed food! I have a clever idea about what to take with you to the restaurant to round out your meal and keep it healthy.

To make this vegan menu, I consulted the full ingredients lists found on the Whataburger website for each of these items.

With 13 years of experience reading ingredients lists as a vegan, I can tell you confidently that these items are vegan!

The classic vegan menu item: Fries! These are fried in soybean oil, not animal fat like some restaurants (I’m looking at you, Buffalo Wild Wings).

Note: It’s possible that these are fried in a shared fryer with chicken or other animal products. If this would be a deal-breaker for you, then be sure to ask about the setup at your Whataburger location.

I love hash browns in all their forms. Whataburger makes theirs in an elongated patty form. Like a long, flat tater tot—love it.

As another blogger has noted, you can even substitute these patties into a burger if you want to create a sort of make-shift “veggie burger” at Whataburger. Of course it won’t actually taste or feel much like a burger, but it’s something!

Note: It’s possible these are fried in a shared fryer with chicken or other animal products. If this would be a deal-breaker for you, then be sure to ask about the setup at your Whataburger location.

Gotta love when there’s an actual healthy, whole-food option. Here we have apple slices in a bag. Simple enough. Probably a rip-off compared to buying apples from the grocery store, but a solid vegan option none-the-less.

This is a simple salad. Once you remove the cheese, all that remains is romaine lettuce, grape tomatoes, and match-stick shredded carrots.

You have the choice of adding these toppings for a little extra cost, too

For vegan-friendly salad dressings, these seem to be the options:

Several of Whataburger’s sandwiches and burgers use Texas Toast as the bun. It turns out that this Texas Toast is vegan. It’s cooked with something they call “bun oil” (mainly just soybean oil), which is vegan.

It still may be worth asking to make sure your Texas Toast doesn’t come with butter, but you should be able to get this as a vegan, no problems.

Whataburger fruit chews are not vegan. They contain gelatin.

Does Whataburger Have a Vegan Burger?

Whataburger does not have a vegan burger. You can substitute a hash brown patty or other plant-based menu items into a burger, but they will not approximate a real burger in any major way.

Is the Apple Pie at Whataburger Vegan?

The apple pie at Whataburger is not vegan. The Whataburger website says it contains milk in the glaze.

Do Whataburger Fries Have Dairy?

Whataburger fries do not contain dairy in their ingredients. However, if you have a severe dairy allergy, you may want to check whether the fries are prepared in the same fryer as dairy-containing products and may be contaminated as a result.

What does Whataburger Fry Their Fries In?

Whataburger biscuits are not vegan. They contain milk.

With my vegan guides to restaurants, I like to include a list of whole-food plant-based (WFPB) options. If you’re vegan for health and trying to strictly avoid fried and processed food, too, this section is for you.

These are the only real WFPB options, as all the other vegan options contain oil or sugar—most of them are deep-fried!

As I’ve recommended for a couple other restaurants: If you want to eat WFPB, you may want to bring your own peanut butter. It could make the apple slices a lot more filling!