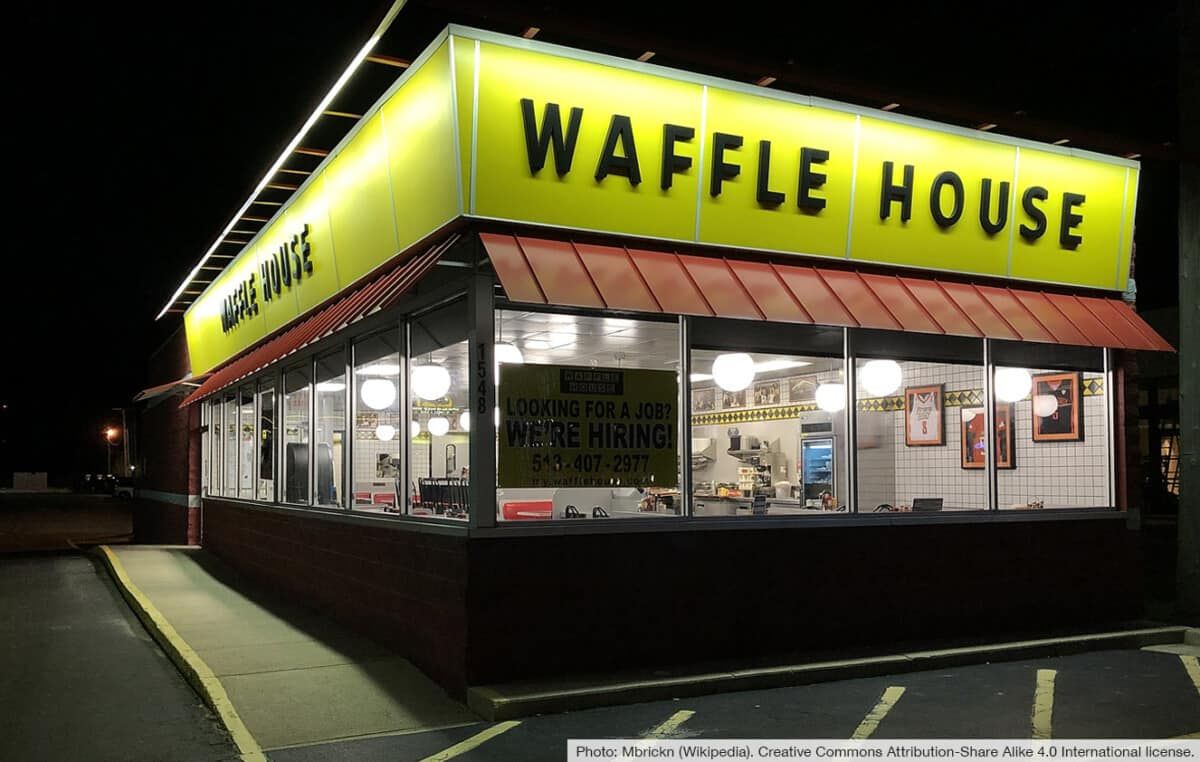 I recently went to Waffle House when I was on vacation with my mom. I wasn’t sure what I’d be able to find as a vegan. But to my surprise, I was actually able to fill up!

More details on all of these below. I’ll also share two other menu items that might be vegan. Basically, the information online for Waffle House is pretty sparse, but I did the best research I could!

At the end of this post, I’ll also ask the question of what there is Waffle House if you’re eating a whole-food plant-based (WFPB) diet… Anything at all?

To compile the following menu, I consulted the breakfast and dinner menus on the Waffle House website. Their website does not have an allergen guide or ingredients lists, so it was a bit harder to confirm things as vegan compared to other restaurants.

This is the obvious menu item to center your vegan meal around. You can actually fill up on a big plate of shredded potatoes like this. (And you can get a big serving if you go for the Double or Triple size.)

You can order these hash browns 5 different ways as a vegan:

When I went recently, I got the “Plain” because I’m a picky eater. I was satisfied, even though it was a little on the oily side for me. (I usually try to keep my oil consumption a bit lower, for reasons explained in this blog post.)

Note: It’s possible that the hash browns will get cooked on a griddle that is contaminated from bacon or other animal products. If you’re worried about this, you could ask them to please cook it on a separate, clean surface. But really that should be standard practice anyway.

Gotta love toast. It’s like bread, but crunchy! (Just kidding around here.) I ordered some toast when I went to Waffle House, and it helped round out the meal a bit. Just be sure to specify that you don’t want butter on your toast.

You can ask for peanut butter or jam to spread on instead of butter. Or heck, get both and make a little PB&J sandwich with the toast.

According to an old menu from a few years ago, the Garden Salad comes with romaine and iceberg lettuce, tomatoes, carrots, and purple cabbage. If you end up getting it, just make sure to say “no cheese” and, if applicable, no croutons or dairy/egg dressings, either.

Are the Grits or Oatmeal Vegan at Waffle House?

I reached out to Waffle House to ask about these menu items, but I did not receive a response. They also do not have allergen information on their website about them.

I would recommend asking staff in person, as either one of these dishes can be made vegan but they aren’t always. Right now I’d just say they might be vegan.

Does Waffle House Have Vegan Pancakes or Waffles?

Waffle House does not have vegan pancakes or waffles at this time.

With my vegan guides to restaurants, I like to include a list of whole-food plant-based (WFPB) options. If you’re vegan for health and trying to strictly avoid fried and processed food in addition to animal products, this is the section for you.

Waffle House is pretty horrible on this front. The hash browns are drenched in oil. From what I remember, the toast I received was made from white bread, so very processed. Even the peanut butter they gave me had added sugar.

The only WFPB option would be the garden salad. And, if it’s made with water, you could also have plain oatmeal or grits—but again, I’m not sure if that’s how they’re made.

Some people may count orange juice as WFPB since it is 100% plant-based… But fruit juices are arguably not the healthiest, as they can spike your blood-sugar with the fiber removed from the fruit.

So, there’s not many options to be a healthy vegan at Waffle House!