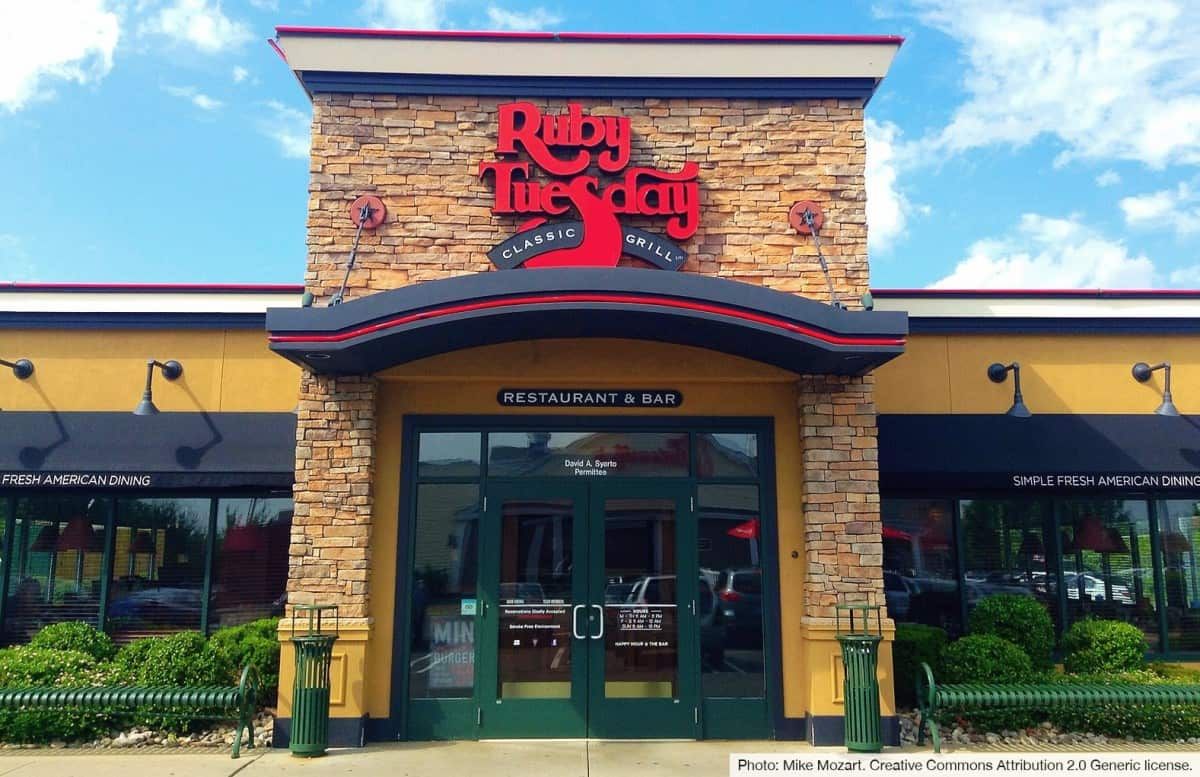 Ruby Tuesday is one of the many restaurant chains that has added a vegan burger in recent years. But that’s just one of the many vegan-friendly choices here. As someone with 14 years of vegan dining experience, I can guide you through their full list of options:

Below, I’ll explain what’s up with these “butter” items actually being vegan. I’ll also share a few options that are surprisingly NOT vegan. I’ll share tips on how to order your salad vegan, and I’ll end with a whole-food plant-based menu, too!

This vegan menu was compiled with the help of the allergen menu on the Ruby Tuesday website. I also consulted some news stories and other posts by vegan bloggers.

Restaurant menus change and often vary by location. I recommend double checking any important information with staff at your local Ruby Tuesday.

Yes, a vegan burger! The Awesome Burger appears to have similar ingredients as the Beyond Burger—it’s mainly made of pea protein, coconut oil, and canola oil. The burger also comes with lettuce, tomato, pickle, and onion.

Choose the Brioche Bun, as the Gluten-Free Bun contains eggs. Believe it or not, you can even choose the “Buttered” Brioche Bun option if you want. It’s not real butter, but rather, it’s a soybean oil sauce they use for a “buttery” flavor.

Note: You can also substitute an Awesome Burger patty into any other burger for $2. However, this doesn’t add any more vegan options that I can see. All the other burgers contain extra meat or dairy products.

You should be able to get a vegan salad at Ruby Tuesday—but what’s the best way to order it? Well, both of the salad entrees are very far from being vegan. So customizing one of those is not very convenient.

If you’re ordering in person or over the phone, I would just suggest asking for what you do want on your salad: Greens, tomatoes, and maybe corn and other toppings from the list below.

Here’s what you’re likely to see for vegan salad dressings:

Note: The French Dressing and the Cilantro Lime Vinaigrette both contain honey. But they would be vegan otherwise.

It’s awesome when you can find vegan breadsticks at a chain restaurant. Sometimes you need to order them “dry” to get them dairy-free. But at Ruby Tuesday, it’s not that complicated. You just need to exclude the “parmesan cream” dipping sauce.

As with several other “buttery” sauces on the Ruby Tuesday menu, the Garlic Breadsticks do not contain actual butter. They contain a “liquid margarine” coating, but this is made with soybean oil, not real butter.

Here are the ingredients for the “liquid margarine” used for the Garlic Breadsticks, in alphabetical order. You can clearly see that it’s dairy-free:

Here we go! Big soft pretzels. These come standard with cheese dipping sauce and mustard. So if you want to make it vegan, just order it with no cheese!

Now, you may have heard from some other vegans out there that pretzels contain animal urine. But fear not. I looked into this a while ago, and it’s basically a big myth. I wrote more about it in my post on Wetzel’s Pretzels vegan options.

Don’t worry about animal pee in your pretzels, okay? Just tell them to hold the cheese/queso!

You can get plain baked potatoes at Ruby Tuesday! I appreciate this because it’s an option without processed oils or sugars. Even if it’s bland, it’s nice to have a healthier option.

I would just recommend emphasizing when you order that you don’t want any dairy: No butter, no cheese, and no sour cream. Just a plain baked potato.

That way, you can be sure it comes vegan.

You’ve got two vegan fry options: French Fries and Sweet Potato Fries. Both of these are vegan in my opinion. That said, they come with the typical disclaimer for fries: They made be cooked in the same oil as chicken or other animal products!

If cross-contamination from shared fryers is a concern to you, then you may want to check with the staff at your local Ruby Tuesday about the kitchen setup.

Another delicious potato product. For me personally, I always found tater tots to be superior to fries. But maybe that’s just me.

These come with the same vegan disclaimer as the fries, however. There is potential cross-contamination from shared fryers.

The “Buttered Corn” at Ruby Tuesday doesn’t actually contain butter! It has a “Garlic Spread” instead, which is made primarily from soybean oil, not real butter.

You may have to order this from the kids menu. On the website menu, it’s showing for me as “Kids Marinara.” But this is just a bit over 400 calories worth of penne pasta and tomato basil marinara sauce—100% vegan.

Another interesting option from the kids menu. This “buttery pasta” does not contain actual butter or any milk ingredients. The “buttery” sauce is made of soybean oil, not butter.

You might find the grapes specifically on the kids menu, but anyone should be allowed to order them just fine. Also, I wouldn’t be surprised if some locations offer apples or a mixed fruit bowl instead. In any case, I love adding little fruit sides like this to a meal.

Here are some extra vegan toppings you can get for your salad or other dishes:

There are plenty of vegan drinks:

You might think some of the following items would be vegan, too. Unfortunately, you would be wrong. These are all not vegan at Ruby Tuesday:

Now let’s address some common questions about how to eat vegan at Ruby Tuesday.

Does Ruby Tuesday Have a Veggie Burger?

Ruby Tuesday has a veggie burger called the Awesome Burger. It is 100% vegan, with similar main ingredients as the Beyond Burger—pea protein, coconut oil, and canola oil. Just make sure to choose the vegan bun (the brioche bun).

The Ruby Tuesday Awesome Burger is vegan, as long as you order it with the brioche bun. The gluten-free bun contains egg. There is no cheese, egg, or anything else non-vegan in the patty or the standard toppings.

Does Ruby Tuesday Have a Vegan Menu?

Ruby Tuesday allows you to show “vegan” menu options with their interactive allergen menu on their website. However, I disagreed with some of the information shown on this setting. The above list of vegan options is the most complete and accurate vegan menu for Ruby Tuesday you can find, in my opinion.

What if you’re not just vegan but also trying to avoid processed foods? Can you get a whole-food plant-based (WFPB) meal at Ruby Tuesday? That means no processed sugar, refined oil, or white flour. Let’s check it out.

You may also be able to request some of the cooked vegetable sides without oil. The steamed broccoli, for example, should be able to be made without oil—steaming does not require oil!

But as usual for restaurant eating, most of the vegan options at Ruby Tuesday are not whole foods. However, you could fill up on the baked potatoes if you really wanted to.