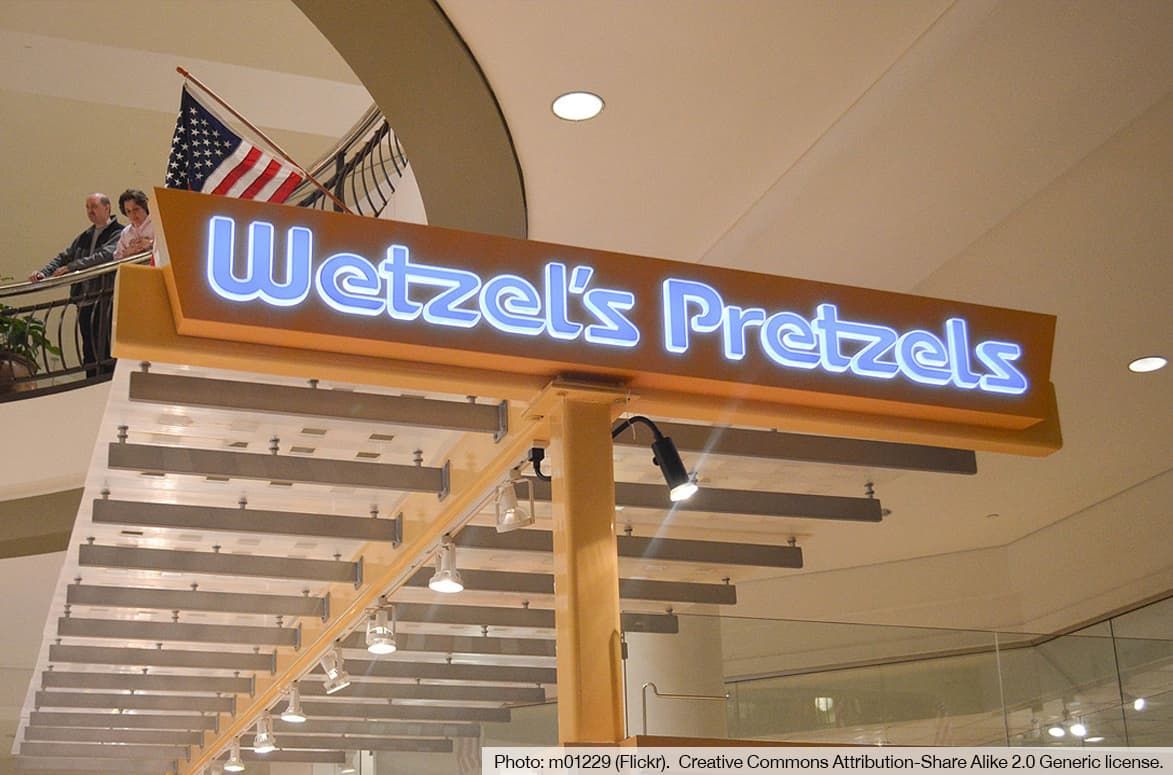 I remember as a new vegan, I read online that pretzels are made using animal urine as a browning agent… Yuck! Luckily, it turns out that wasn’t really true (details below). So today, we’re looking at the vegan options at one of the most popular chains, Wetzel’s Pretzels!

Below, I’ll share the menu options you might assume would be vegan but they’re actually not! I’ll also address the question of whether there are any whole-food plant-based (WFPB) options at Wetzel’s. And I’ll share more about the “animal pee in pretzels” question, too!

The following vegan menu was created with an allergen information sheet and other online resources. I also followed up with Wetzel’s Pretzels over email, and I will update this post if I hear back from them.

Restaurant menus frequently change and vary by location, so I recommend double-checking information in this post with staff at your Wetzel’s Pretzels location.

You’ve got a few options for vegan pretzels if you hold the butter:

Note: The Almond Crunch Pretzel may be vegan, but I found an allergen information sheet that says it contains fish. I have no idea what fish ingredient it could be. I emailed the company to ask—I’ll update this post if I figure out the mystery.

Wetzel’s Pretzel Bits are pretty cute and convenient—you get a bag full of pretzel pieces. Two of these options can be made vegan if you order without butter:

Lots of vegan drink options. Wetzel’s has a variety of lemonades and frozen drinks, along with a typical selection of Pepsi soft drinks, tea, and more:

You may think that the following items would be vegan as well, but unfortunately they appear not to be:

I like to include a section in my vegan restaurant guides that also specify any whole-food plant-based (WFPB) options at the restaurant in question, for those of you not only avoiding animal products but also processed foods.

So, what are the WFPB options at Wetzel’s Pretzels? None, to my knowledge. All the pretzels and Bitz are made with processed white flour, and they’re likely made with oil and/or sugar, as well.

There are no salads, no steamed veggies, no fruit sides, and no whole starches like baked potatoes or brown rice… So yeah, simply put: Wetzel’s is not the place to eat WFPB!

Okay, so before I go, I just wanted to address this question of animal pee being used to make pretzels—because I actually heard this when I first went vegan. Where does this idea come from, and is it true?

Well, have you heard of this compound called urea? It’s found in urine, and actually it’s used in many biological processes in our bodies and in animals’ bodies.

Well, apparently, urea can be used as a browning agent for factory-made pretzels (source).

That said, even if urea is used for browning pretzels… Urea production today is an industrial process that does not involve animals. You can find the details here, but the starting materials are ammonia and carbon dioxide.

So while it may be theoretically possible to use animal pee to derive urea that you use to brown pretzels… that’s not what is happening commercially. Any pretzels you find at the store, or at restaurants like Wetzel’s, are going to be pee-free.

So, yes, check for dairy and other animal products—but urine should not be a concern!