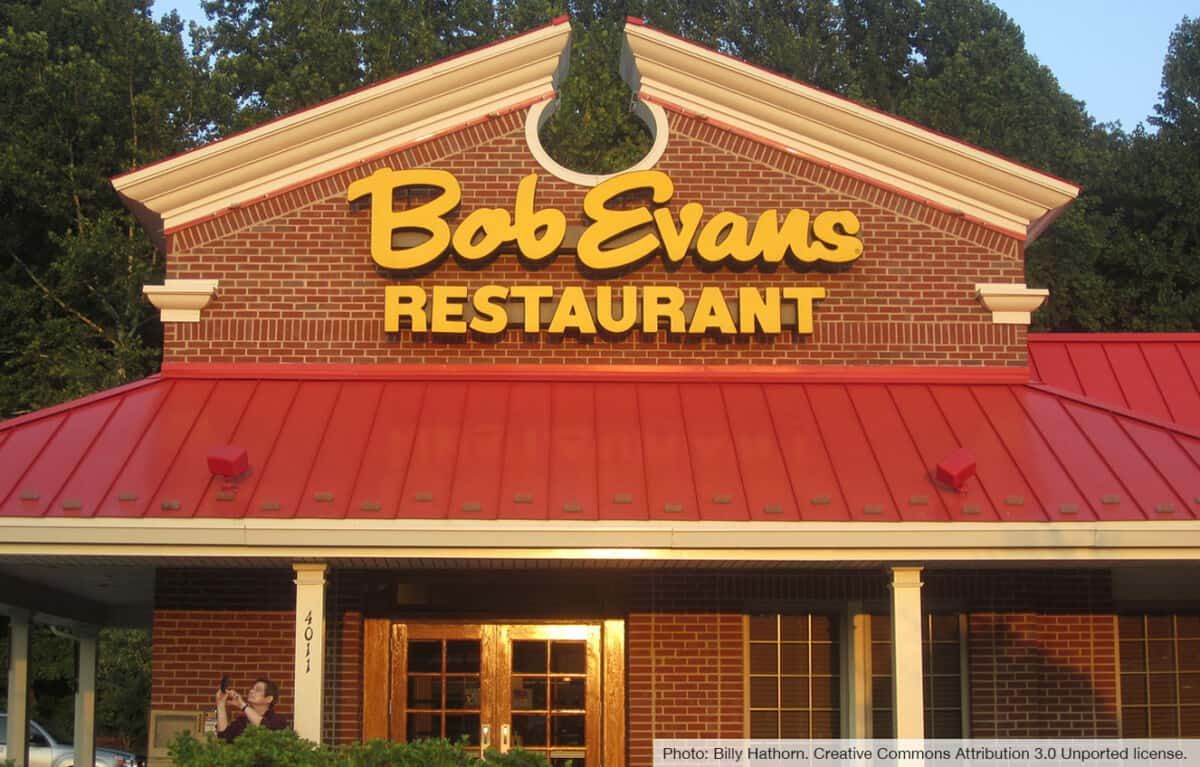 Bob Evans… it’s not exactly vegan heaven. In my 14 years as a vegan, I’ve never gone to Bob Evans by choice. But if you find yourself eating there, I can confirm: There are some options!

I’ll close with a whole-food plant-based guide to Bob Evans, in case you want to avoid processed and fried food, too.

To make this vegan menu, I spoke to a representative from Bob Evans Guest Relations. I then looked through the allergen and nutrition information on the Bob Evans website. Then I spoke to the Bob Evans rep again to confirm some things.

So these are solidly confirmed vegan options. That said, it never hurts to check with your server about the details at your specific Bob Evans location.

You can get vegan oatmeal at Bob Evans. You need to specify “no milk” with your server, though. You can get the oatmeal with brown sugar and, if you like, dried cranberries. They offer pecans for your oatmeal, too, but they’re honey-roasted, so not strictly vegan.

I do love me some hash browns. Something about it is more satisfying and wholesome-feeling than french fries, even though it’s the same ingredients!

The Bob Evans rep told me these are vegan in their standard preparation, and the allergen menu confirms that. You may be able to get added vegetables if you ask.

Most restaurants have a salad or two that you can easily make vegan, and this is the case at Bob Evans, too. Make sure to ask for the salad without cheese, croutons, or any other animal products.

Salad dressing: I only saw one vegan-looking option on their allergen menu—Colonial Dressing—but they may have more at your location.

You may be able to get other components added, too, since you’re removing the cheese. Sometimes restaurants are willing to add avocado slices or nuts that they have on hand. Just be cautious about pecans—they might be honey-glazed.

Note: The fries are likely fried in the same fryer as chicken or other animal products. If this is a concern to you, I’d ask the server at your location.

Broccoli is a vegan side you can often depend on because it’s usually steamed, therefore any butter is just added after the preparation, and you can easily ask them to hold the butter. A Bob Evans rep confirmed with me that this is a go at their restaurants.

The “buttered” corn at Bob Evans is supposedly actually dairy-free. It’s “buttered” with margarine, which doesn’t contain milk. This is what I heard from Bob Evans Guest Relations. You still may want to check with your server, though.

This is just a little dish of fruit, likely pineapple, cantaloupe, and grapes. It might include berries or whatever is seasonal and on hand. Definitely vegan.

Note: The dinner rolls are not vegan—they contain milk and eggs. The Brioche Bun contains milk.

Bob Evans has some pretty delicious toppings on hand that are actually vegan. I’m sure you could come up with some creative way of ordering these and making use of some of them:

Note: The Tortilla Strips are listed as containing milk on the Bob Evans website. So I wouldn’t get those without asking about that.

Plenty of options for vegan things to drink:

I’m waiting for confirmation back from Bob Evans about the following dishes.

The Bob Evans rep I spoke to told me that their cole slaw is vegan. This was a little surprising, but vegan cole slaw is not unheard of.

Then I looked on the allergen menu on the Bob Evans website, and it said it contains egg. So I’d just ask about the cole slaw at your location if you’re interested.

These appear to be vegan, according to the allergen menu—and they usually are—but I’m double-checking with the Bob Evans rep because they weren’t mentioned in our original exchange. (Waiting to hear back)

This options would appear to be vegan-friendly, according to the allergen menu—but it could contain animal fat on the potato skins. I’m double-checking with the Bob Evans rep because they weren’t mentioned in our original exchange. (Waiting to hear back)

The following options might appear vegan at first glance, but they are not vegan:

I’m waiting to hear back from Bob Evans on whether either of those items can be ordered vegan or not.

Bob Evans Rolls are not vegan. They contain milk and eggs.

Bob Evans Biscuits are not vegan. They contain milk, as suggested in the name “Buttermilk Biscuits” and confirmed by the allergen menu on the restaurant’s website.

Bob Evans Mashed Potatoes are not vegan. They contain milk, as is standard for mashed potatoes that are not specifically made to be dairy-free.

What if you didn’t just want to eat vegan at Bob Evans but also go whole-food plant-based (WFPB)—so, no processed or fried foods. Could you do it?

Here’s how I would eat WFPB at Bob Evans:

You may also be able to get the baked potato, but again, I’m waiting to hear back about that. Most of the other options contain oil, which is not a whole food.