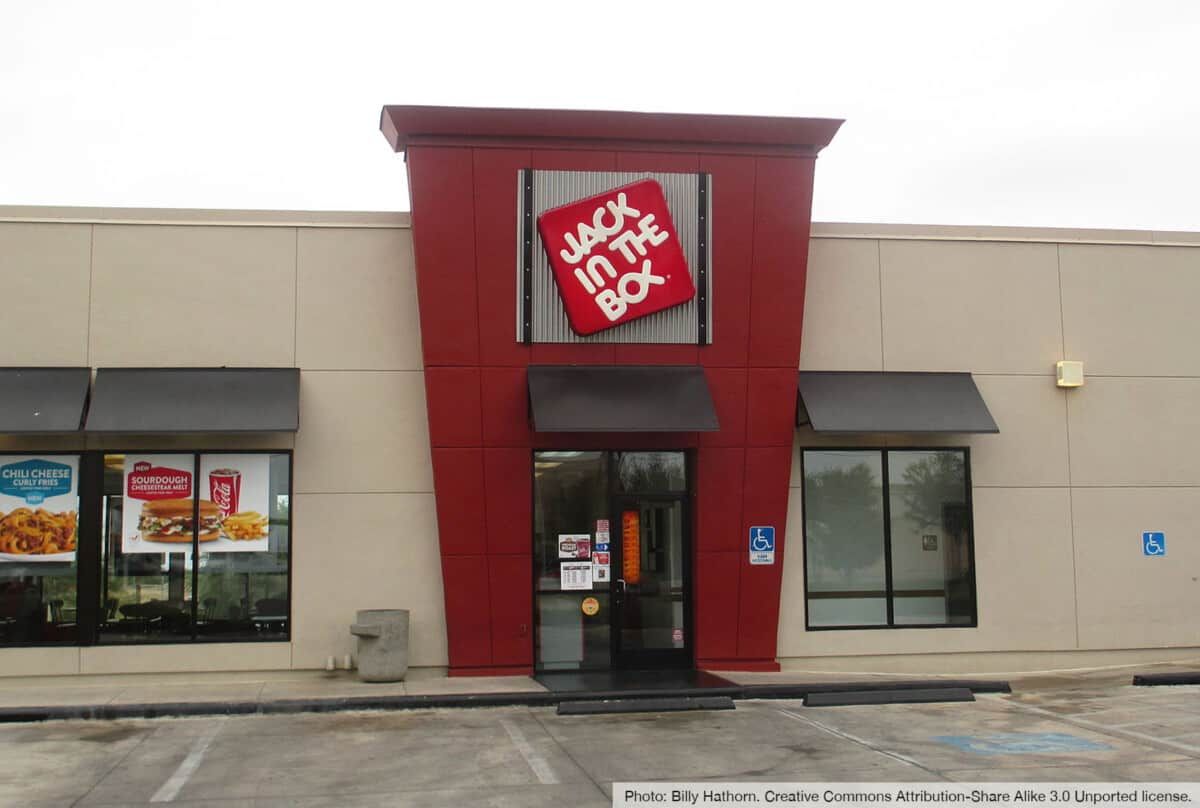 Burger joints aren’t the greatest for vegans. Especially ones like Jack in the Box, which don’t even have a veggie burger. But if you look closely, there’s actually more vegan food at Jack in the Box than some other fast-food places.

Vegan options at Jack in the Box:

Read on for more tips on how to exactly order these items vegan! I’ll also cover whether the tacos, onion rings, churros, or egg rolls are vegan (or can be made vegan). Lastly, I’ll share the truth of the strange rumor that Jack in the Box burgers are made from horse or kangaroo meat!

Jack in the Box Vegan Menu

Jack in the Box has a bit more for vegan options compared to the average fast-food burger joint. They don’t just have french fries, but a whole bevy of fried potato products.

They also have this first item, which was a surprise to me…

This is pretty interesting for a burger joint. They sell a teriyaki chicken bowl with white rice and veggies (usually broccoli). And you can get it vegan by asking to hold the chicken!

Their teriyaki sauce is confirmed vegan by the ingredients on the website—no honey or anchovies or anything wacky like that.

Basic french fries, which can usually expect to be vegan at fast-food places. So, nothing surprising, but good to have it.

One interesting option is to order the fires as “Halfsies”: You get half normal fries, half curly fries. Both are vegan, so this works out great.

Curly fries—a bit more exciting yet! Also 100% vegan. If you don’t believe me, here are the full curly fries ingredients, taken from the Jack in the Box website:

if you prefer bigger, wedge-shaped chunks of fried potatoes, Jack in the Box has those, too. And they’re vegan! Just make sure you don’t order the “Bacon Cheddar” version of these. Get plain potato wedges.

It looks like the side salad comes vegan in its standard form, but you may want to specify that you want it dairy-free just in case. At some restaurants, you need to order the salad without cheese and croutons.

The Low Fat Balsamic Vinaigrette Dressing is vegan. They may have other vegan dressings on hand, too. Just ask.

I honestly don’t even know what these are, but I read the ingredients, and they’re vegan. (They sound pretty tasty, too.)

I’m not even sure if Jack in the Box offers these anymore—but if you see them on the menu, they’re vegan.

At some restaurants, the only vegan options are these random sides from the kids menu like apple sauce. Well, this is an option at Jack in the Box, too. But you probably don’t need it here. There are more options!

Lots of options here for flavoring the other items you got above:

Here are the vegan drink options:

Here are a few other common questions about vegan and vegetarian matters at Jack in the Box.

Are Jack in the Box Tacos Vegan?

Jack in the Box tacos are not vegan or vegetarian. Although they contain some textured vegetable protein (soy), they also contain both beef and chicken.

It may be possible to order a vegan taco from Jack in the Box. The taco shell itself should be vegan. You could ask them to put in some ingredients like rice, beans, lettuce, salsa, and french fries. But I’m not sure if most locations would be willing to do that.

Are Jack in the Box Onion Rings Vegan?

Jack in the Box Onion Rings are not vegan. They contain dairy in the form of dried whey.

Are Jack in the Box Egg Rolls Vegan?

Jack in the Box Egg Rolls are not vegan or vegetarian. They contain pork, anchovy (fish), and egg. Spring rolls and even “egg rolls” at other restaurants are sometimes vegan, but not at Jack in the Box.

Are Jack in the Box Churros Vegan?

Jack in the Box Churros are not vegan. They contain milk and egg whites in the filling.

Are Jack in the Box Burgers Real Meat?

Does Jack in the Box Have a Veggie Burger?

Did Jack in the Box Ever Serve Horse or Kangaroo Meat?

This may sound like a funny question, but there’s a reasonable context for it.

Jack in the Box never served horse or kangaroo meat. This was a myth based on two news stories that ran in the 1990s. There was horse meat found at one of its processing facilities in San Diego, but Jack in the Box maintains that it was never used, as the error was caught in time.

How does kangaroo meat fit into the picture? Well, the horse meat found at the Jack in the Box facility was apparently shipped from an Australian company. And around the same time, there was a high-profile news story about kangaroo meat being shipped out of Australia, too.

So these two news stories got combined into one myth that has stuck to present day. But you shouldn’t worry about horse or kangaroo meat in Jack in the Box food today. (source)

I like to include a section about strictly whole-food plant-based (WFPB) options in my vegan guides to restaurants. I like to do this because a lot of the options may be fried or processed, and some people are actually vegan for the health reasons.

If I was eating WFPB at Jack in the Box, I would definitely get the Side Salad (maybe a few of them). The Apple Sauce Pouch from the kids menu doesn’t have any added sugar, so you can add that, too. After that, it’s going to be a little tricky.

They’ve definitely got veggies on hand, as they include them in the teriyaki bowl. But if you’re opposed to white rice and sugary sauces, then you won’t want to get the teriyaki bowl as described above. Maybe you can get the veggies on their own, if you really want.

I also saw black beans listed in the ingredients lists on the Jack in the Box website. If they do have black beans on hand, you might be able to get them with some veggies. But I wouldn’t count on this. It’s pretty far from any menu item I see.

Maybe skip Jack in the Box if you’re on a strict WFPB diet.