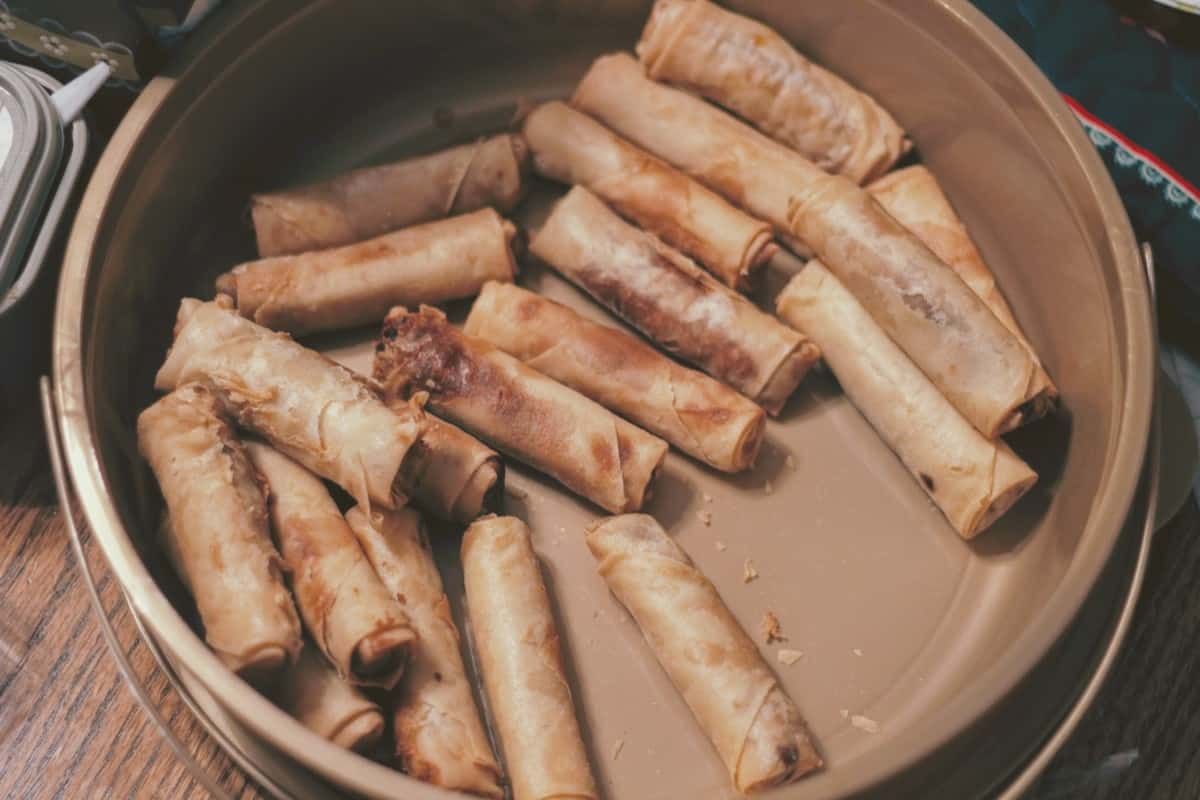 I love spring rolls. I order them most of the time when I go to Asian restaurants—and I’ve even made spring rolls myself at home. But honestly, sometimes I’m not even sure what all of the ingredients are. Are there ever non-vegan ingredients to worry about?

Spring rolls are usually vegan, but not always. Usually, they only contain vegetables and a wrapper made of water, salt, and flour (or rice paper). But sometimes, even “veggie spring rolls” do contain eggs in the wrapper. In those cases, spring rolls aren’t vegan.

Below, I’ll cover some of the popular brands of spring rolls and whether they’re vegan. I’ll also cover which ingredients to look for, and whether “egg rolls” are vegan, too. Stick around to know how to add spring rolls to your vegan diet!

There are a lot of ways you can make spring rolls. Not all of them are vegan-friendly. Even some “vegetable-based” spring rolls, which are made of only vegetable fillings, contain egg white in their wrappers to keep the roll intact.

The question “Are spring rolls vegan?’ is really too broad because there are many variations of spring rolls out there. Instead, we should be asking more specific questions like “Is this kind of spring roll vegan?”

Spring rolls are bite-sized, filled and rolled appetizers (aka dim sum) that are popular in various Asian cuisines. Spring roll recipes actually differ significantly from one region to another.

They’re typically filled with several vegetables like cabbage, carrots, green beans, zucchini, and mushrooms. They can include soy sauce sometimes, but that’s dependent on your recipe or the restaurant. Some recipes use shrimp (like Vietnamese spring rolls) or meat.

Spring roll wrappers are usually vegan, as the typical ingredients are flour, water, and salt. There are other versions where rice paper is used instead of flour.

But it’s not uncommon to find “veggie” spring rolls containing egg white in the wrapper mixture. This helps them maintain their shape (even though that can be achieved by using cornstarch, without affecting the taste much anyways).

Egg rolls can be vegan, but it depends. Contrary to what you might think, egg rolls don’t contain eggs in their filling (although, the wrapper may contain eggs for the same reason as standard spring rolls).

To know for sure if an egg roll is vegan, you need to ask about which ingredients are included or look through an ingredients list.

What differs with egg rolls, technically, is that they’re often slightly bigger than spring rolls, and they’re fried, with a thicker wrapper. But in practice, “spring rolls” can be fried, too.

While fried rolls are not really healthy, as a vegan, nothing really stops you from eating fried food, as long as it’s fried in vegetable oils.

If you’d like to learn more about vegans and fried food, give this article a read: Can Vegans Eat Fried Food?

What I’m concerned about is that after a little research, I found out that traditional wonton wrappers are made with eggs in their recipe. So, unless they’re implementing a new way for baking these wrappers, I don’t think they’re vegan-friendly.

This also sparks up an issue with Panda Express not having a vegan-friendly menu in the first place.

When a veggie blogger asked whether Panda Express locations offer vegetarian and/or vegan menus, their reply was a straight denial. Instead, according to their reply, they offer some “vegetable-based” dishes. They don’t explicitly state whether animal byproducts are used in those dishes or not.

As far as I can tell, PF Chang’s vegetable spring rolls are vegan. Not just that, but at PF Chang’s, they offer a sweet chili dipping sauce, which also doesn’t contain any animal products.

The reviews about their vegan menu overall are quite positive, as well.

The only downside—depending on your preferences—is that PF Chang’s spring rolls are fried. While that doesn’t disqualify them for vegans, fried food isn’t generally considered healthy. So try not to go overboard with these.

What Are Some Vegan Spring Roll Brands?

Here are some of the vegan spring roll brands you can buy to make at home:

Note that they use cornstarch instead of egg to keep the wrapper from breaking down. Excellent thinking, if you ask me.

Keep in mind that it contains peanuts, nuts, and cereals containing gluten. Avoid if you’re allergic to any of these.

I appreciate this brand especially because of its unique filling. Beware that they also contain nuts, though.

Can You Make Vegan Spring Rolls at Home?

If you’re still not satisfied with buying packaged spring rolls, you can take it a step further and opt-in to make your spring rolls in the comfort of your home.

Not only will you be more responsible for your own health, but you’ll also get the chance to develop your cooking skills. It’s a win-win situation!

I’ve made spring rolls at home myself. At first, it can be a challenge to get the wrappers figured out. But you’ll get the hang of it after some experience.

The one and only PF Chang! If you tried them before and liked them, now you can recreate these amazing spring rolls in your own kitchen.

Are Spring Rolls Healthy for You?

All I’ve been talking about is whether spring rolls are vegan or not. But like most foods, spring rolls have some potential health pitfalls I should mention. Mainly the soy sauce and oil (when fried) would be the main concerns.

Soy sauce is used in most spring rolls recipes, vegan or not. Sure, it does give that umami taste that vegan food can lack, but is it worth it?

Soy sauce contains a high concentration of sodium, and according to the New England Journal of Medicine, high sodium intake is linked to cardiovascular disease.

Studies also show that soy sauce might contain some cancer-causing substances. One of these substances, 3-MCPD, which is present in the acid-hydrolyzed vegetable protein found in chemically produced soy sauce, is considered to be a carcinogen.

While it’s not as popular as soy sauce, some spring rolls recipes include peanut oil, which holds a risk, too.

Peanut oil contains a high amount of omega-6 fatty acids. Unlike its relative omega-3 fatty acids, omega-6 tends to increase inflammation in the body, and that might lead to a number of diseases.

Peanut oil is also easily oxidized, and the resultant free radicals can cause severe damage in the body, leading to accelerated aging or specific types of cancer.

Spring rolls are delicious. And they’re an appetizer lots of vegans count on. But keep in mind that it varies how they’re specifically made.

Be aware of the soy sauce and peanut oil in spring rolls for health reasons. Maybe try not to get the fried ones every day!

Don’t be afraid to experiment with different fillings, too. Who knows, you might stumble upon a new big vegan spring rolls recipe!