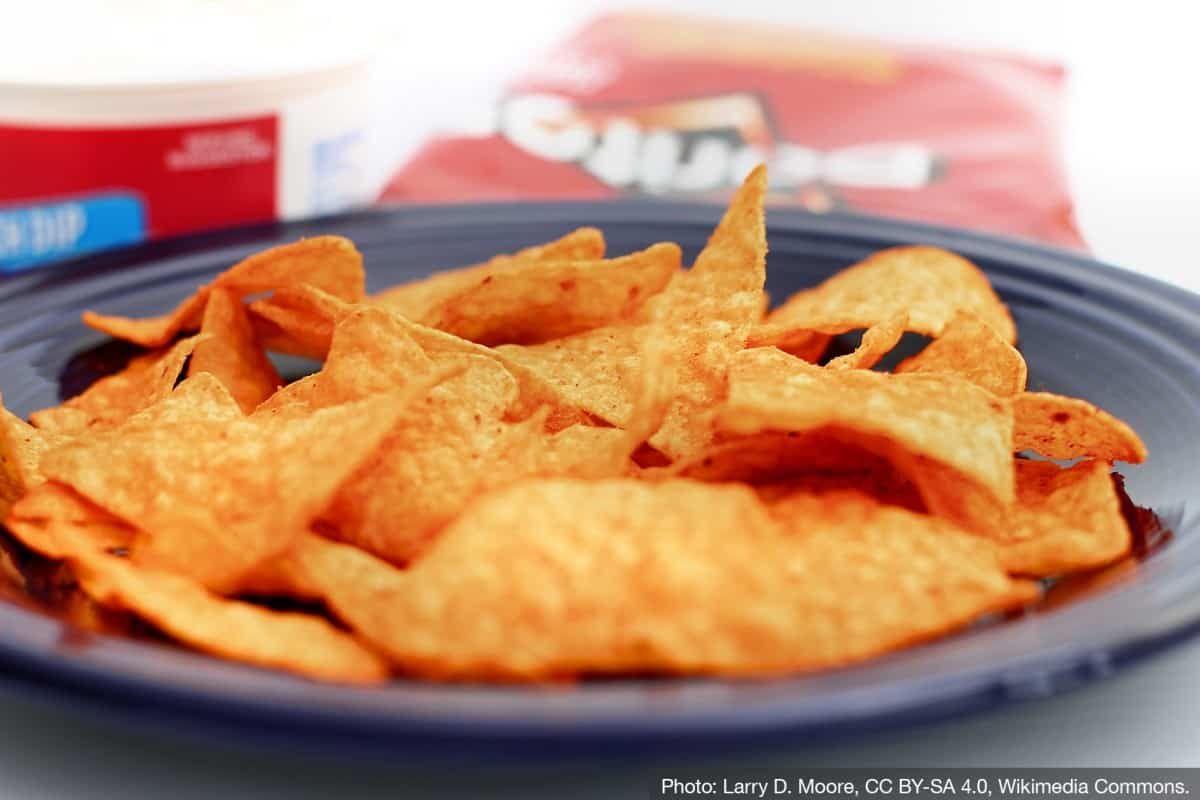 Do you know what Mac N Cheese, Mountain Dew, Doritos, and Pickles all have in common? The answer is Yellow 5. This artificial food coloring is one of the most widely used in the world. But what’s it made of? Is Yellow 5 vegan?

Yellow 5 is generally considered vegan. It is made synthetically from petroleum—not from pork or any other animal product. That said, Yellow 5 is still being tested on animals to confirm its safety. For this reason, some vegans boycott Yellow 5 along with other artificial food coloring.

Below, I’ll share how Yellow 5 is actually produced (not from pigs!). I’ll link to four animal experiments done with Yellow 5 in the last few years. And I’ll cover some safety concerns with this food dye, so you can decide if you want to avoid it!

Yellow 5 is also used in more surprising cases, like in some pickles. Why is Yellow 5 used in pickles? Well, apparently the pickles looked more appealing with extra yellow color!

Yellow 5 dye can be combined with other colors to achieve different shades and hues.

Yellow 5 goes by a few other names, too, such as:

What Is Yellow 5 Lake?

Yellow 5 Lake is a water-insoluble version of the Yellow 5 dye. It was engineered for applications where the yellow color can’t be allowed to dissolve in water.

For example, on the outer coating of a tablet or pill, they would use Yellow 5 Lake—not plain Yellow 5. Since it comes in contact with saliva, they need a water-insoluble version.

What Is Yellow 5 Made Of?

Yellow 5 is synthesized from petroleum. Yellow 5 is not derived from animals. However, as will be discussed below, it continues to be tested on animals.

Yellow 5 is an “azo dye,” which is an important class of dyes used to color foods, clothing, and more. Azo dyes are created from petroleum products through a series of reactions. You can read a bit more about it here.

Yellow 5 does not contain pork, and it is not derived from any pig or animal product. Yellow 5 is derived from petroleum.

Glycerine can potentially be used as a solvent for food dyes, and glycerine can be derived from pork. But this doesn’t seem to be the case with Yellow 5.

Yellow 5 is halal. It is made from petroleum and contains no pork- or animal-derived ingredients. It has been confirmed as halal by multiple sources:

Is Yellow 5 Tested on Animals?

Yellow 5 is regularly tested on animals because the long-term health effects of artificial food dyes are still disputed.

The following are a few animal experiments published in the last decade on tartrazine (Yellow 5):

If you read the abstract for each of these studies, usually ongoing safety concerns with Yellow 5 (see below) are cited as the reason for the tests being done.

Note that this is a different situation from one-time animal testing to confirm a new product’s safety. This is ongoing testing to determine how dangerous the food dye is, in what quantity.

Most people would draw the conclusion that this means Yellow 5 is not cruelty-free. But there may be more to think about…

Does It Help to Boycott Ingredients Tested on Animals?

It’s sad to learn about experiments being conducted on innocent animals. But does it actually help animals to boycott the products being tested?

In this case, as long as Yellow 5 is widely produced and consumed, it will likely continue to be tested. Even if all vegans boycott Yellow 5, the lowered demand would probably not reduce the experiments in coming years.

Also since Yellow 5 is so widely used, in so many products, companies are not likely to notice a shift in demand away from products that have the ingredient.

My personal opinion: If you want to boycott these products, you should email or call the companies and tell them. Otherwise, they’re not likely to even notice.

Personally, I do not worry about strictly avoiding Yellow 5 or other artificial food coloring. That said, it’s good to avoid processed foods overall—so I don’t consume it often, either.

Yellow 5 is considered safe enough by governmental bodies that it is still legal.

That said, various organizations have raised concerns about the effects of Yellow 5 on hyperactivity in children and potential carcinogenic effects.

Generally speaking, the effects of artificial food coloring on hyperactivity in children is better documented than any other health effect.

In 2004, researchers from Harvard and Columbia University estimated that removing artificial food coloring from the diets of children with ADHD would be about one-third or one-half as effective as treating them with Ritalin.

Some research has suggested that as little as 50 mg per day of artificial food colorings could cause behavioral changes in children. This research also noted that a single serving of Kool-Aid Burst Cherry contains more than this amount (52.3 mg). (source)

Does Yellow 5 Cause Cancer?

A 2015 study found that Yellow 5 caused DNA damage in human white blood cells that it was exposed to. It is possible that this DNA damage could lead to tumor formation if it were to happen in amounts that could not be repaired.

So, as is the case with Red 40, there is a potential, theoretical tie between Yellow 5 and cancer. But there is not good evidence of this actually happening.

Yellow 5 is the azo dye that has the strongest tendency to cause allergic reactions. Still, tartrazine intolerance is estimated at below 0.12% prevalence. (source) The FDA has reported that fewer than 0.01% of people get hives from Yellow 5 exposure.

So, Should Vegans Avoid Yellow 5?

Whether you choose to boycott Yellow 5 depends on why you’re vegan and what your values and goals are. Let’s recap the key points: