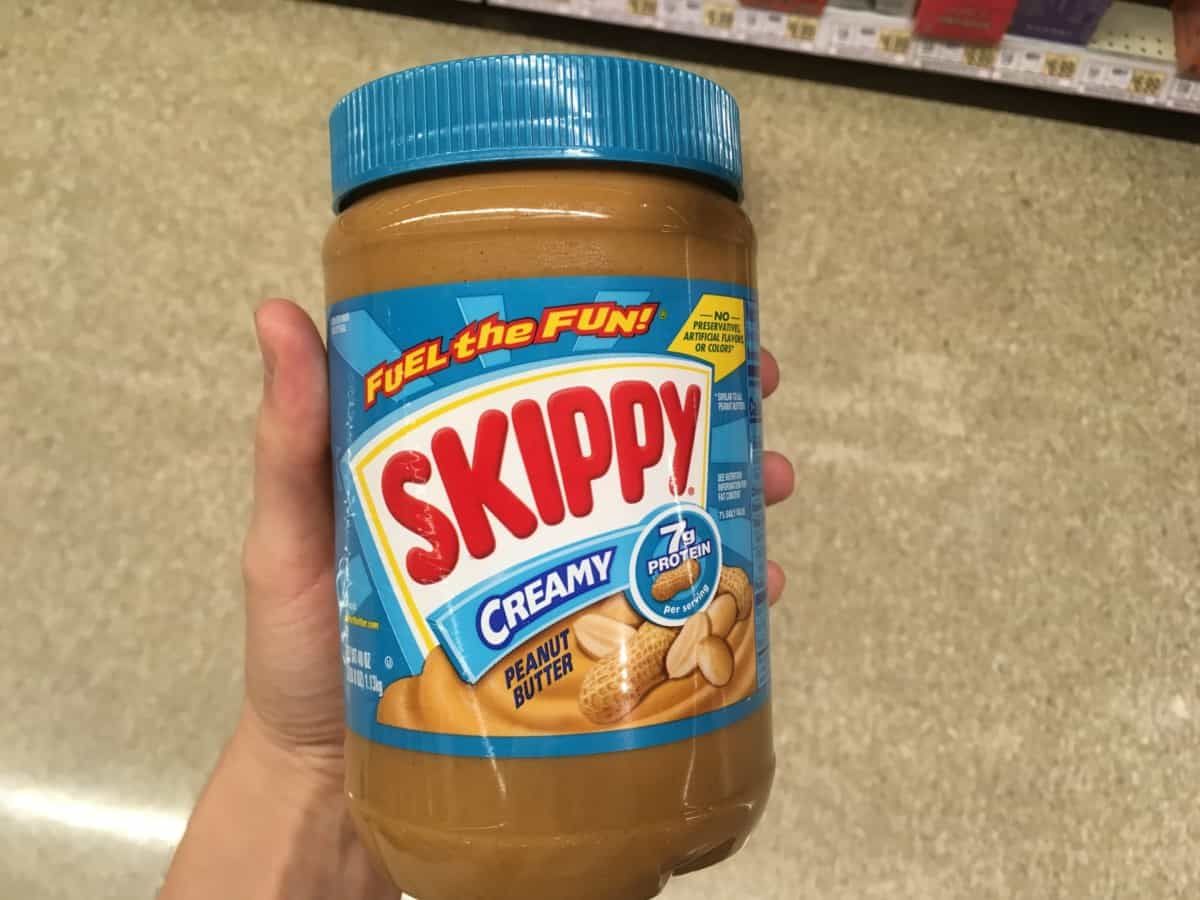 I love peanut butter. And that didn’t change when I went vegan—I still eat peanut butter regularly.  Usually, I choose the most natural brands that only have peanuts in the ingredients. But sometimes I get tempted by name brands like Skippy or Jif that include more extra ingredients.

Although I would assert that Skippy is vegan, some vegans disagree. From health reasons to animal cruelty at Hormel Foods (owner of Skippy), I’ll fill you in all the details, so you can decide for yourself whether to eat this yummy stuff!

Skippy Contains No Animal Products—Unless You Buy a Honey Flavor

There are two kinds of Skippy peanut butter that include honey, but both of them say “honey” on the front of the package. So it’s not going to be a sneak attack on you!

The first one is Skippy Natural Peanut Butter Spread with Honey. It comes in Creamy and Extra Crunchy varieties.

The other Skippy variety that includes honey is the Roasted Honey Nut Skippy Peanut Butter.

Most vegans do not consider honey to be vegan, so they would likely not choose to eat these two versions of Skippy that include honey.

But some vegans are okay with eating honey because it is not entirely clear whether bees experience pain. Many vegans decide for themselves that they don’t care much about avoiding honey. These vegans would be okay with these Skippy varieties that contain honey.

Is the Sugar in Skippy Peanut Butter Filtered with Bone Char?

You might see claims online that Skippy Peanut Butter is not vegan because the sugar in it may have been filtered with bone char. This is actually an issue that comes up with many products containing sugar.

Sugar is sometimes filtered with bone char from animals as a way to refine it and polish it to a white color. Typically, as consumers, we don’t know whether the sugar included in common products went through this process.

So, should vegans avoid sugar? There are some vegans who avoid processed sugar, but most vegans decide not to worry about it. Really, it’s up to you.

Why I’m Okay with “Bone Char Sugar” as a Vegan

There are two reasons I’m okay with eating refined sugar that may have been processed with bone char:

(1) We don’t even know for sure whether the sugar was processed with bone char. It’s only a possibility that an animal product was used for filtering the sugar, not even a certainty. And the bone char isn’t even in the actual food product—it was just possibly involved in the production process. Doesn’t seem like a big deal.

(2) The point of veganism is not personal purity from 100% of all animal byproducts. No matter what your reasons for going vegan are, this is still the case. I’ll elaborate:

Going vegan is about having an impact, whether for the animals, the environment, or your own health. Trying to go from 99% vegan to 100% vegan just doesn’t have much of an impact—and it can be extremely difficult to get that last 1%, too.

If you’re 99% vegan, that’s enough to completely transform your health, it’s enough to dramatically decrease your impact on the environment, and it’s enough to remove 99% of your support from abusive animal farming practices.

So you don’t really need to obsess about the last 1%. Where you draw the line exactly is up to you, but I suggest when it comes to sugar that was possibly filtered with bone char, don’t worry about it.

Of course, refined sugar is not really healthy, either—but it won’t hurt you much in moderation. Go ahead and eat the Skippy.

Possible Concerns with the Oil in Skippy Peanut Butter

There are two different possible concerns with the oil in Skippy for vegans.

Trans fat is known to be the least healthy kind of fat, even worse than saturated fat from animal products. Here is a page from the American Heart Association on why trans fat is so unhealthy.

Trans fat raises your LDL (bad) cholesterol, while lowering your HDL (good) cholesterol and increasing your risk of heart disease and stroke (source).

This means that Skippy today does not contain trans fat. That said, some people are still suspicious of the hydrogenated vegetable oils. They are a very processed ingredient—that’s for sure. I wrote a bit more about them in my post about Crisco.

Even though Skippy Natural peanut butter avoids the unhealthy hydrogenated oils that are found in regular Skippy, there are still potential concerns with the oil, believe it or not.

Skippy Natural uses palm oil instead of hydrogenated vegetable oils. Well, some ethical vegans boycott palm oil due to unsustainable harvesting practices. Palm oil harvesting often threatens the lives of orangutans and other animals who live in areas where the palm is harvested.

To learn more about whether vegans should eat palm oil, read this article here.

For me personally, I actually find this to be a bigger reason to avoid Skippy Natural than any of the concerns raised above about sugar or hydrogenated oils in regular Skippy. But I would still say Skippy Natural is vegan.

If I was eating Skippy Natural often, I would maybe just consider sending an email to the company asking them about how their palm oil is harvested, and I’d look more into that issue.

I think it does a lot more good to contact companies expressing your concern over some ingredients, rather than just quietly boycotting something.

Are the Omega-6 Fats in Peanut Butter Unhealthy?

You’ve probably heard about how you should supplement with omega-3’s. They’re the healthiest kind of fat.

Well, peanut butter is loaded with omega-6 fats. Based on my understanding, this effect is even more when it comes to the more processed peanut butter brands like Skippy.

A little Skippy isn’t going to hurt anybody, but it’s worth considering an omega-3 supplement to help balance out your healthy fats.

My personal favorite supplement for omega-3’s is Future Kind’s multivitamin (link to my detailed review). Along with DHA and EPA (the best, most bioavailable forms of omega-3), it also contains vitamin D and vitamin B12. These are the three key nutrients that vegans often miss.

Another practical consideration when talking about the health impact of peanut butter is whether it will cause you to gain weight.

If you eat peanut butter in moderation, it won’t cause you to gain weight. It’s not like it has some magical power to cause weight gain! It is just a high-calorie, high-fat food. So it’s easy to overeat it.

Personally, I’ve gone through phases where I smeared peanut butter on so many of my snacks and meals, it did cause some weight gain over the course of a few months.

But I’ve also incorporated peanut butter into healthy diets when I was maintaining or losing weight. It’s all about portion size and total calorie balance.

If you’re watching your weight, just be aware that peanut butter contains a lot of calories, about 100 calories per tablespoon. And that can add up fast.

Side Note: If you’d like to lose weight on your vegan diet but haven’t yet… you should try Nutriciously’s free weight loss challenge. They put together a free 5-part email course on how to do veganism for weight loss specifically.

You’ll learn what causes weight loss on a vegan diet, and what mistakes to avoid. You’ll get a meal plan plus the overall idea of what you need to do. I love Nutriciously’s guides—sign up for this free challenge at least!

The Skippy peanut butter brand is owned currently by Hormel Foods. Hormel Foods produces a bunch of different non-vegan products including Spam and Muscle Milk. Worse than that, Hormel has been accused of extreme animal cruelty on their pork farms.

The website Cruelty Free Investing documents which companies are the worst for animals, so investors that care about animal welfare can choose not to invest in those companies. Hormel Foods makes the list of top 10 worst companies for animals.

To read about the full list of undercover investigations done at Hormel Foods farms and the cruelty they found, see this page.

Should Vegans Boycott Skippy Due to the Cruelty of Hormel Foods?

Personally, I do not boycott Skippy for the cruelty carried out in the production of other Hormel Foods products, although some vegans may choose to.

My logic is that it would be extremely difficult to boycott all foods that have some financial tie to cruel or unsustainable businesses.

Overall, I think it’s just useful to not have illusions that “vegan” actually always means 100% “cruelty-free.”

There are many gray areas out there, and just by being alive, we are bound to participate in something that causes some suffering or death to some creatures, even if it’s just stepping on a bug in the grass. So don’t get up on your moral high horse just because you’re vegan!

I hope I did a good job laying out all the reasons why vegans may find Skippy peanut butter to be objectionable in this article.

As I have said along the way, I am personally okay with eating Skippy peanut butter, even though I usually choose a peanut butter with fewer ingredients. For practical purposes, yes, Skippy is vegan!