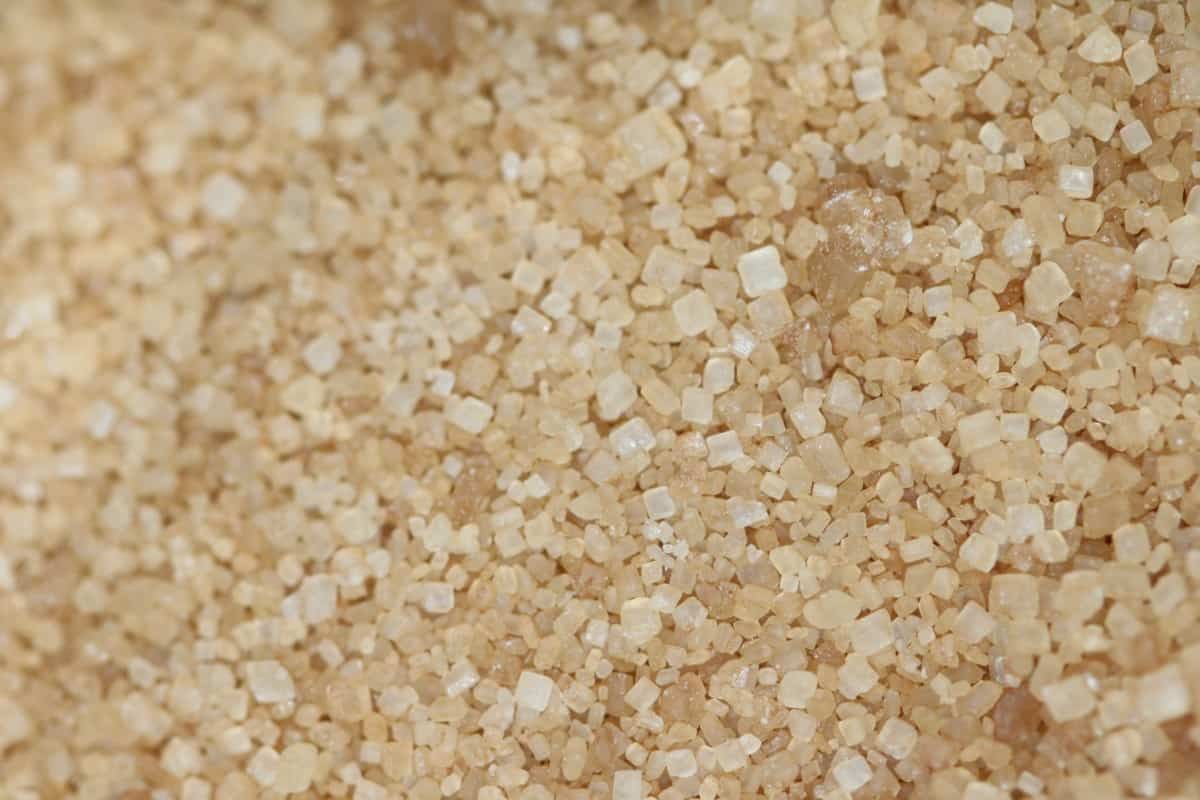 Sugar can be a perplexing subject for new vegans because a lot of white cane sugar gets processed using animal bone char. There’s a whole big vegan debate about refined sugar and whether we need to boycott it or not. But luckily, there are many kinds of sugar that get a 100% green light.

Is turbinado sugar vegan? Turbinado sugar is considered vegan. Unlike normally processed cane sugar, it is not decolorized using animal bone char. This is also the case for other unrefined and raw sugar options like demerara sugar and muscovado sugar. They are all vegan-friendly options.

Below I’ll explain exactly what turbinado sugar actually is, how it’s made, and why it’s vegan-friendly. I’ll also touch on this broader vegan debate about sugar and bone char! And I’ll share some other sugars made without animal by-products.

What Is Turbinado Sugar Made Of?

When I first saw “turbinado sugar” in the store, I thought there must be a plant called “turbinado” that the sugar comes from. But it’s actually a reference to the turbines used in its production. Interesting.

Turbinado sugar—like much sugar produced today—is made of sugar cane. The difference with turbinado sugar is that it’s processed in such a way that leaves a portion of the molasses in the sugar, rather than refining it out.

Turbinado sugar is sometimes referred to as “raw sugar” because it is less processed. However, it is not actually fully raw. The sugar syrup is boiled in the production process to thicken it and crystallize it. (source)

The sugar is also spun in a centrifuge or turbine (hence “turbinado”) to remove some amount of the molasses. Due to the bit of molasses remaining in the final turbinado sugar product, it has a bit of caramel or butterscotch flavor to it.

Yes, turbinado sugar is dairy-free. The “caramel flavor” in turbinado sugar does not come from actual caramel containing dairy—it comes simply from the molasses left in the original sugarcane.

The Difference Between Turbinado Sugar and “Brown Sugar”

Turbinado sugar is technically a kind of “natural brown sugar,” but it’s not the same as “brown sugar” in the store. So what’s the difference?

Well, both sugars have a brown color due to the presence of molasses in the sugar. But the difference is in the processing, how the molasses got there, and the total amount of molasses in it.

Turbinado sugar contains less molasses than most “brown sugar” products. And its molasses came from the original sugarcane crop—it’s the molasses put in the sugar by nature, never refined out.

In contrast, brown sugar follows a process of being refined fully into white sugar, then having molasses added back in for color.

You could sum this up by saying turbinado sugar is less processed than brown sugar. However, take note that this doesn’t necessarily mean that turbinado sugar is healthier. It’s still mostly devoid of nutritional content besides sugar. (source)

Turbinado sugar also has bigger crystals than most brown sugar, and it also has less of a tendency to clump together due to lower moisture content. So these differences play a role in which one to select for specific uses. (source)

Turbinado sugar is never filtered with bone char (source). This makes it a more strictly, completely vegan-friendly sugar compared to some other kinds of sugar.

Turbinado sugar is centrifuged to remove a large part of the molasses, but it is not passed through animal bone char filters that are often used to decolorize white cane sugar.

The Vegan Debate on Sugar

Do vegans even need to avoid sugar that is processed with bone char? Honestly, this is a big debate in the vegan community. So any simple answer to this question is not giving you the full picture.

Truthfully, it depends on your vegan ethics and your goals and beliefs. My personal belief is that vegans should not bother with avoiding sugar processed with bone char.

There are all kinds of vegans. And while I respect all of them, including the most strict “militant vegans,” I tend to fall more on the “practical vegan” side of the spectrum.

Although my veganism is driven by ethical concern for animals, I think it makes sense to focus on just the most important changes to our diets. If we make veganism into a very difficult task—where you can’t eat any foods that have “sugar” listed in the ingredients—that will likely not spread as far, and the impact will likely be less for animals.

From what I can tell, avoiding all refined sugar could help you achieve personal purity… but it would not really help the animals. So personally, I don’t think it’s worth it.

That said, if you feel grossed out by sugar filtered with bone char, by all means, feel free to cut it out of your life! And if you disagree with me about the ethical calculations behind this whole issue, that’s okay, too!

Is Sugar in the Raw Vegan?

Sugar in the Raw is vegan. It is one of the leading brands of turbinado sugar, which is less processed than normal cane sugar. As such, it is not decolorized using animal bone char like much cane sugar is, and it is vegan-friendly.

Other Kinds of Vegan Sugar

Turbinado sugar isn’t the only option you have for non-bone-char sugar. In fact, there are lots of options!

Beet sugar is one of the most popular kinds of sugar that are fully vegan, even without needing to buy raw/organic. Even the purest white beet sugar isn’t filtered with bone char. Something about the beet sugar just turns white easier, so it isn’t necessary.

All Organic Sugar Is Vegan

One helpful tidbit to know is that all organic sugar is vegan. This is because bone char is not on the list of allowed substances in organic farming (source). Therefore, if you see a sugar package that is labeled USDA Organic, you know it’s vegan.

Demerara sugar is vegan. Like turbinado sugar, demerara is a form of natural brown sugar that retains some of its original molasses. And unlike normally processed cane sugar, it is not filtered through animal bone char.

Muscovado sugar is vegan. Sometimes called dark brown sugar, muscovado is even less processed than turbinado and demerara sugar. It retains far more molasses, and so it has a stronger taste yet. It is not filtered through bone char, so it’s vegan.

Other names you might see for unrefined sugar are rapadura sugar, panela, jaggery, and piloncillo. These are all vegan, as they are not filtered with animal bone char like normal cane sugar.

For a quick guide to vegan sugar options, I like PETA’s guide here. If you want to go into more depth about all this bone char stuff, check out the Vegetarian Resource Group’s post about it.