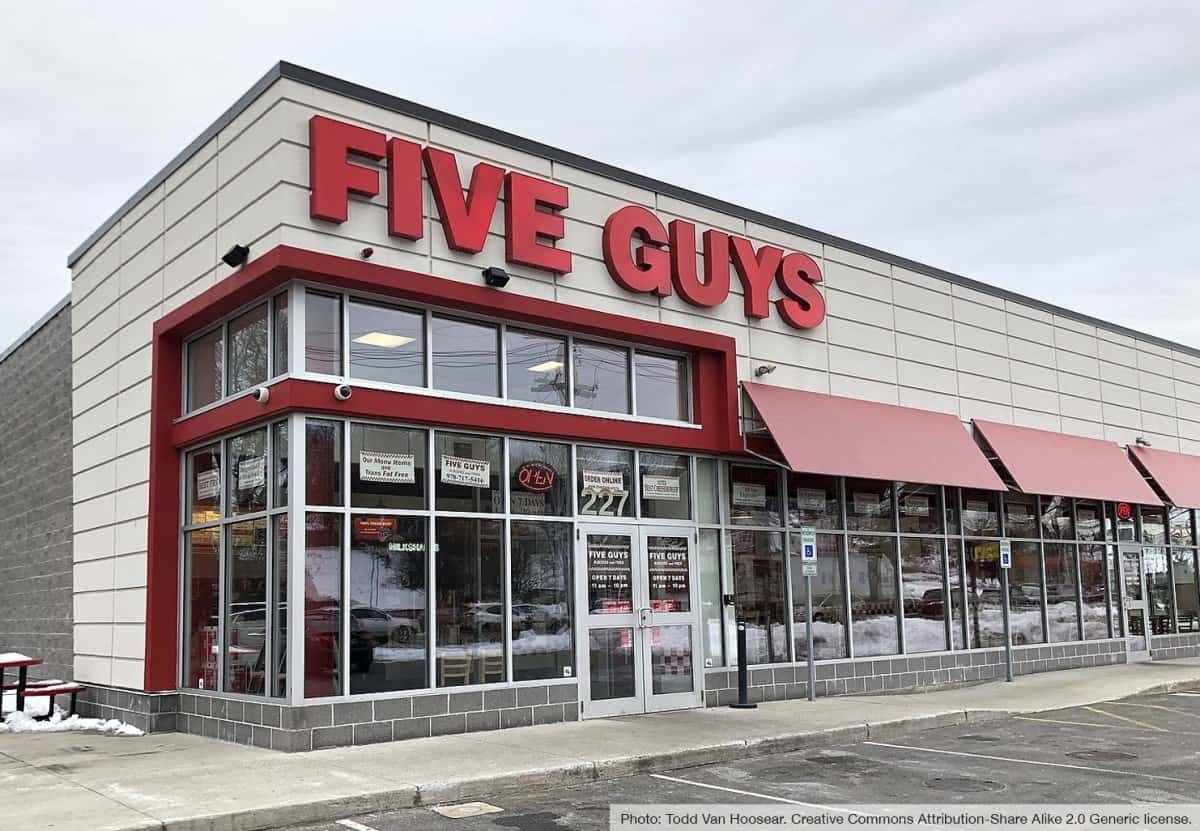 As a vegan, I’m generally not excited about going to burger places. But honestly, Five Guys is even worse than most of them. They’re buns aren’t even vegan! That said, they do still have a few things we can eat.

Below, I’ll cover how to order each of these items vegan. I’ll identify which items on this menu also qualify as whole-food plant-based (WFPB). And I’ll end with 3 tips of restaurants that are better than Five Guys for vegans.

The following vegan menu was compiled primarily from the allergen menu and ingredients lists on the Five Guys website.

Restaurant offerings change frequently and often vary by location. So if any of these details are of great concern, ask the staff at your local Five Guys to confirm.

These are classic, simple french fries. They’re cooked in 100% peanut oil—not in animal fat like some restaurants do. This means they’re all good from a vegan perspective.

Here are the ingredients for Five Guys Style fries. I appreciate how they don’t include a ton of preservatives and chemicals I can’t pronounce:

Here are the ingredients for the Cajun Style fries:

This is perhaps the saving grace of Five Guys for a vegan. They give you free in-shell peanuts with your order!

This provides you with extra calories and nutrition, as peanuts are pretty healthy and filling… And maybe even better, it gives you something to do while the rest of your family or friends are eating their burgers!

At most restaurants, this type of menu item would be vegan. But unfortunately, not at Five Guys. Five Guys Buns are not vegan—they contain milk and eggs.

So if you want to get the veggie sandwich made vegan, you have to ask for a lettuce wrap. This is a creative solution, but you really can’t expect this kind of meal to fill you up at all.

I would personally just stick to the fries and peanuts. Or even better—I might just eat the free peanuts that come with my friend’s or family’s meal, and save my money.

They should have these toppings and vegan sauces on hand:

Note: At UT locations only, Five Guys has a “Fry Sauce”—this is not vegan, as it contains egg.

These are vegan ingredients that they have on hand for use in milkshakes. (They don’t actually offer vegan milkshakes, though.)

That said, if you want to try to cobble together a vegan dessert from a couple of these, it could potentially work:

Note: The Malt Vinegar (above) is vegan, but the “Malt” Mix-in for their milkshakes is not vegan. For more on malt stuff, see my blog post on which malt products are vegan.

The main beverages at Five Guys are Coca-Cola products. Typically they have a Coca-Cola Freestyle machine, which lets you combine different flavorings together. They’re pretty fun if you’ve never used one before.

Now let’s answer some common questions about the vegan options at Five Guys.

Does Five Guys Have Veggie Burgers?

Five Guys does not have veggie burgers, black bean burgers, Impossible burgers, or any other meatless patties. Furthermore, Five Guys doesn’t even have a vegan bun for their burgers.

The closest thing they have is the “Veggie Sandwich,” but again, it doesn’t come standard as vegan because of milk and eggs in the bun.

The Five Guys Veggie Sandwich is not vegan, as the bun contains milk and eggs. However, you can order it with a lettuce wrap instead of a bun to make it vegan.

Five Guys fries are confirmed vegan. Both the Cajun Style and Five Guys Style fries are cooked in 100% peanut oil, not animal fat or lard. However, they may be prepared in shared fryers with meat or other animal products. Ask at your local Five Guys if this is a concern.

What if you’re trying to eat a really healthy vegan diet? Is it possible to get a full meal of strictly whole-food plant-based (WFPB) options at Five Guys?

Well, the fries are not whole foods, as they include a bunch of refined oil. So you’re basically left with only the free peanuts and potentially the veggie sandwich (with a lettuce wrap instead of bun).

But keep in mind that even the grilled veggies in the veggie sandwich are probably grilled with oil. So if you’re trying to be 100% strict about your WFPB diet, you’d have to exclude those, too.

Basically you’d be eating free peanuts and maybe a few veggies. If you want to ask for some fruit from the milkshake toppings, you could maybe get banana or strawberries. But it’s going to be pretty minimal.

3 Better Restaurant Options for a Vegan…

Just yesterday, I wrote a guide on how to eat vegan at Carl’s Jr. They’re another burger chain—but they actually have vegan burgers! They offer Beyond Burgers that you can substitute into any burger on their menu.

Or Wendy’s has a baked potato, apple slices, homestyle potatoes, and chips and salsa. They also have a “veggie sandwich” you can get custom made vegan—because they’re buns are vegan, unlike Five Guys.

Even someplace like Sonic Drive-In has vegan onion rings, tater tots, and a soft pretzel. So that’s already better than Five Guys, even without a veggie burger or anything.